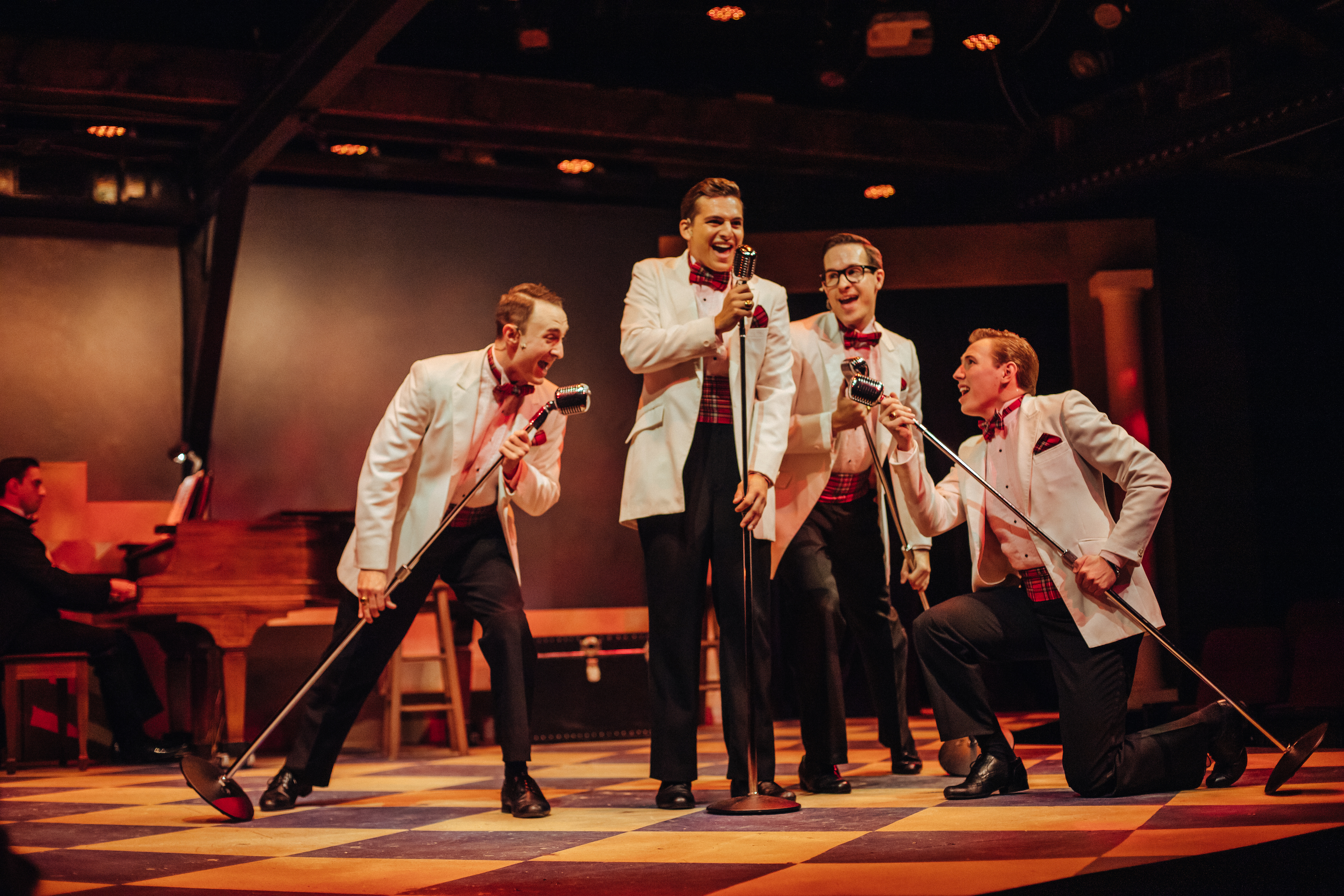 Forever Plaid has been around for 30+ years now and I have seen dozens of productions, starting with one at The Theater Barn in 1995. It is one of my very favorite shows and I always have a great time. So I was really shocked when I had a strongly negative reaction to the production currently running at the Mac-Haydn Theatre.

This led to much research and some deep soul searching. How could a show that routinely brings me great joy be so distressing? Is the problem me and my expectations, or is it some aspect of the production itself? This is the moment when I wish that I was not, as my son once told me, “a hopeless purist and way over-prepared” for every theatrical encounter.

Exiting the theatre, one thing I knew for sure was that this production was unlike any earlier Plaid productions I had seen. The intermission was in the wrong place, the Calypso segment of the show was missing, lines had been changed, the Heart and Soul segment was changed and not for the better, and the choreography, which is normally almost identical from production to production, was very different. Were all these choices made by director James Barry? Or was there something I was missing?

You should know that when you secure the rights to perform any show, it is made clear that you may not rewrite, cut, add to, or rearrange the material. Did this production violate that requirement? I visited the Music Theatre International website and investigated what was what with Forever Plaid. And I discovered that during COVID an alternative script was developed to accommodate the most stringent of pandemic regulations. This is clearly the version the Mac-Haydn licensed and I can understand that reasoning – they would have acquired the rights about a year ago and none of us has a crystal ball to predict what the COVID situation will be that far in advance. Better to be prepared for the worst than caught off guard.

That being said, this version was created decades after the original, in very different times and under very stressful conditions. It is not the best. Actually, the standard version of the script is a remarkably perfect little jewel of silliness and beautiful music, and it is never a good idea to tamper with perfection, even when you have to.

But other problems with this Mac-Haydn production are clearly directorial choices. Barry had great success a few years back with a production of Million Dollar Quartet, a jukebox musical featuring four guys. It is easy to mistake Forever Plaid as such, but it isn’t. It is a little play with jukebox songs interspersed. Forever Plaid is all about The Plaids, not about the music, although I was fascinated to read the author’s notes in the perusal copy of the script and see how carefully the songs were chosen and assigned to craft each character’s story arc.

I genuinely love The Plaids, even though they are fictional characters, and am always excited to see what each performer brings to their role. Sadly, about all this cast brings to the stage are their singing voices, which are great, but occasionally the harmonies were slightly off, which matters when you’re playing a harmony group.

Ashley deLane Burger has created the choreography and, as I said, it is not the conventional staging. Some of the changes are obviously to accommodate the Mac-Haydn’s three-quarter round configuration – Forever Plaid was created for a proscenium stage/fourth wall set-up – but I saw a staging of this show at the Mac when it was completely in the round and the choreography was brilliantly adapted to retain the gags and character development while accommodating the needs of the space.

Standard Plaid choreography is very linear while Burger’s is circular. The impression I came away with was of the Plaids constantly circling things – mic stands, stools, each other – drawing the energy inward rather than projecting it out to the audience. I had not realized until it was removed here, how much the standard choreography does to establish the characters. When the show started the first thing I started noting were those missed moments of storytelling, rather than any particular dance moves.

The creators developed the show as a series of beats. The first beat introduces and establishes the characters. Here, it didn’t. And thus all was lost. Without establishing that empathy between the audience and The Plaids, and the relationships among them, nothing that happens afterwards matters.

Barry has inserted the intermission immediately as that first beat closes, which is not where I’ve ever seen it placed before. Forever Plaid can be performed without an intermission or there is a fairly natural spot for an intermission to be inserted if desired. Under tight COVID restrictions an intermission would not have been allowed. But there one is, right after Kylan Ross as Jinx has brought down the house with “Cry.” All that momentum vanishes like a burst soap bubble.

Other than Ross’ fine rendition of Jinx’ solo I really can’t find anything to get excited about. The show shares a set with Xanadu which means there is an inexplicable mountain of set looming behind the pianist throughout. The costumes are minimal and the gags surrounding them get lost. And the props…what the heck, Props Master Emily Allen? Forever Plaid is a prop-heavy show, but they’re all low-budget items that can easily be sourced or built. There is no excuse for skimping on what is already skimpy.

Music director Eric Shorey, who comes with the room, provides all the musical accompaniment seamlessly on an onstage piano. The show is scored for piano, bass, and drums, but I didn’t miss this extra instruments, what I missed were my beloved Plaids and the joy this show usually brings.

This all makes me sad. I love The Plaids, I have long been a champion of the Mac-Haydn, and I have great admiration for the talents of James Barry, whose career I have followed for at least two decades. I anticipated that this would be an easy, happy review to write, and I am heart-broken to be wrong.

The show runs two hours with one intermission and is suitable for all ages. Proof of vaccination and masks are required. Tickets $45. http://www.machaydntheatre.org/