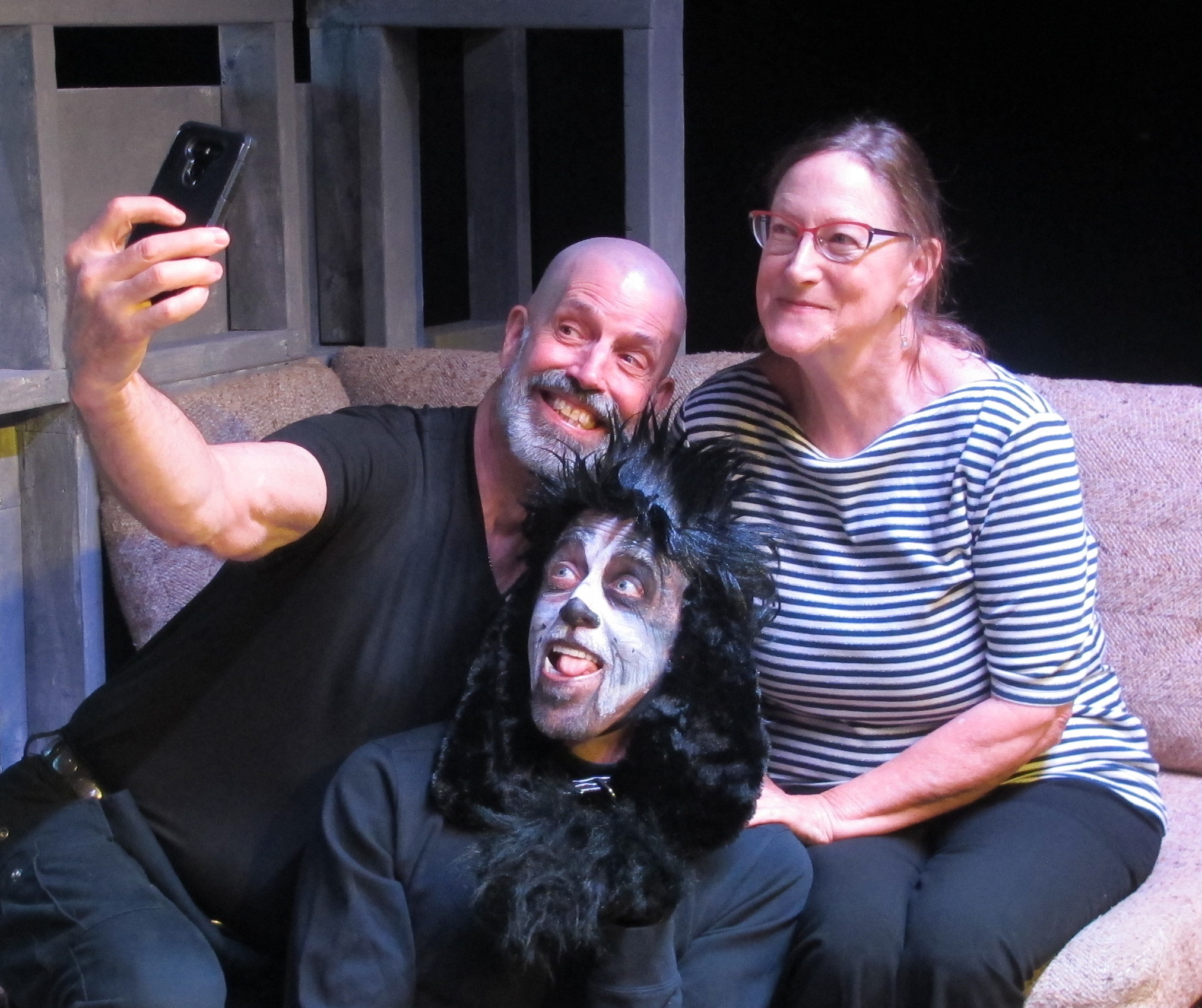 Anyone who has been or is a caretaker for a victim of dementia knows the emotional turmoil it causes.  What seems to start as a simple element of aging grows into a life-changing responsibility.  One’s personal time no longer exists.  Quietude no longer exists.  In some cases financial security no longer exists.  Much of this is central to Bridge Street Theatre’s production of Brad Fraser’s Shelley’s Shadow where the acting is strong and carries the audience through some of the script’s weaker aspects.

The play is a world premiere commissioned by Bridge Street.  The founders of the theatre, John Sowle and Steven Patterson, have had a long history with Mr. Fraser having produced, directed or acted in several of his previous plays.

David (Steven Patterson), a gay sixty-year-old writer, is a downstairs neighbor of aged lesbian Shelley (Janet Keller) who lives in the penthouse of an apartment building.  They meet when David offers to help her when her dog Shadow (Daniel Hall Kuhn; the dog talks) has defecated on the street.  He volunteers to walk Shadow as Shelley is having back problems.  He also goes to the market for her.  These simple acts of friendliness lead David into a series of Shelley’s misadventures and crises where he has to put his life aside as the weight of responsibility falls on him.

Through all this Shelley shows signs of creeping Alzheimer’s Disease.  She forgets to do everyday things; she leaves the water running in the plugged sink; she soils her bed; she forgets where she lives.  David is her life line.

The picture Fraser draws of these two people is touching and filled with angst.  To watch her, a vital human being, succumb to the ravages of her deterioration is wrenching.

The title of the play is a dramatically ambiguous.  Is Shelley’s Shadow merely the dog, or is it David who follows her in order to protect her, or is it that the Shelley we see in an institution is not the Shelley who lived a meaningful life?

The acting is first-rate.  As Ms. Keller’s Shelley slowly deteriorates and displays the frustration of her mental collapse, we empathize with her.  Her moment to moment confusion feels and sounds real.  Patterson makes David’s life changes as upsetting as Shelley’s.  He is a good human being who cannot control events not of his making.  His frustrations and inner conflicts are as real as Keller’s.  The two play off each other beautifully creating depth and understanding to their relationship.  Kuhn, giving life to Shadow, is truly redolent of a dog.  He prances, paws, barks and speaks with David, or is it David’s conscience?

Though the dialogue in the script is effective, there is too much of it.  David is a narrator almost as often as he is a part of the plot. We are told about myriad events when it would be more dramatic to have some of them actually occur.  Some of the events noted above would be difficult to stage, but those who have dealt with Alzheimer’s Disease know that there are moments of violent behavior or that certain incidents the victims say occurred have not.  This would have created a truer more frightening picture of the frightening agony families and caregivers live through.

The play, directed by Mr. Sowle, also has a staging problem within the script.  David, as the narrator, has a number of lines that are delivered either in his or Shelley’s apartment or a neutral area.  It sometimes feels as if he is bouncing from place to place because some of those speeches are only a line or two.  Otherwise, his work serves the writer’s intentions and touches the audience’s emotions.  Sowle also designed the set and lights both of which are very effective.  The background is a series of geometric open frames that allow us to see the scenes that take place upstage in Shelley’s bedroom or kitchen.  The configuration of the frames suggests the bedlam in the victim’s mind.  The lighting complements the mood of each moment of the plot.

Bridge Street has the reputation of offering audiences an opportunity to experience adventurous theatre. It is worth a trip to Catskill, New York, to see intelligent acting and a story that delves into the minds of people whose lives careen through monumental strife and change.