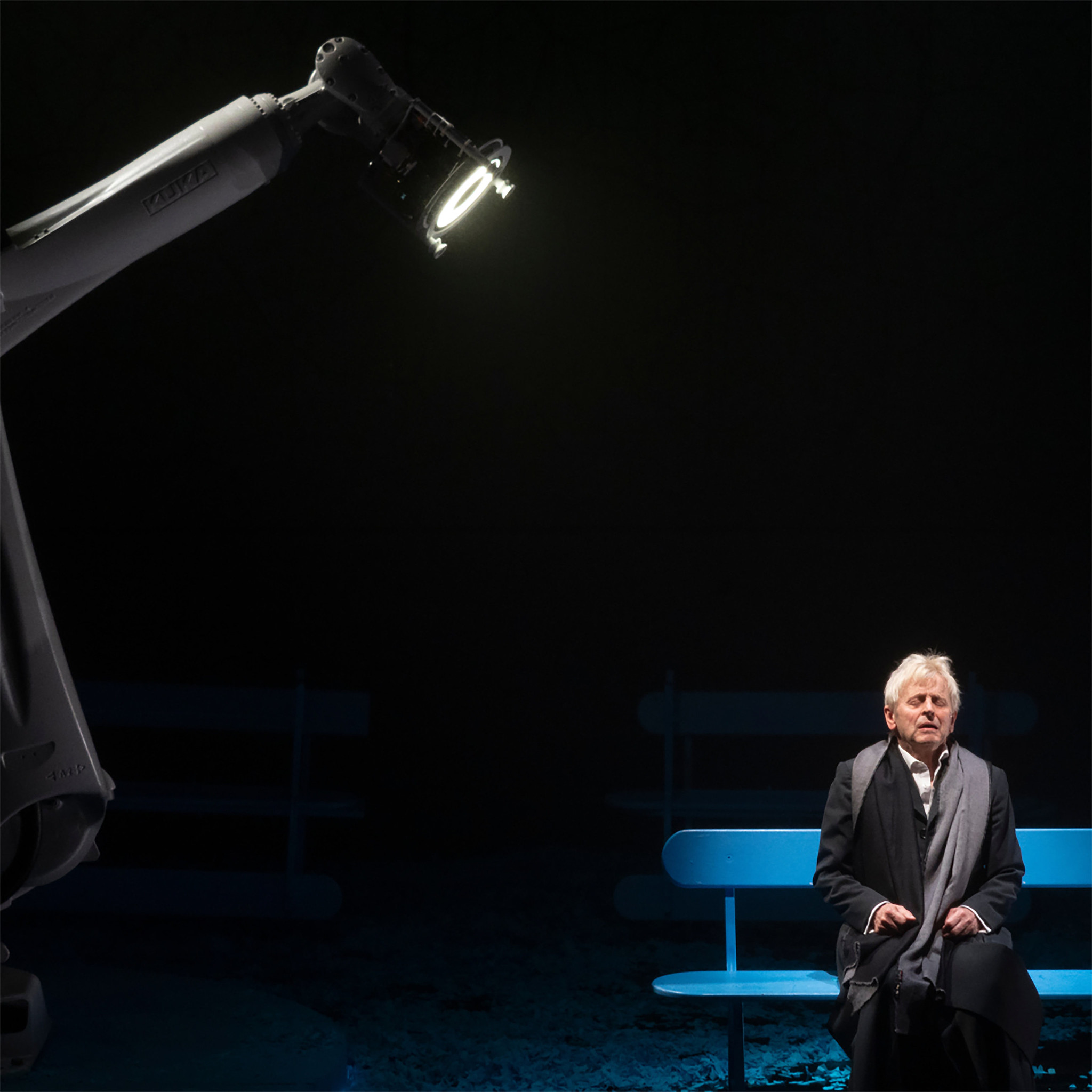 LENOX, Mass. – Shakespeare & Company is pleased to announce it has joined a cohort of prestigious theater companies nationally to co-present The Orchard /an auction/ a groundbreaking new piece of live virtual theater.

Created by Arlekin Players, an award-winning, artist-driven theater company helmed by Ukrainian-born artistic director Igor Golyak and known for its inventive productions and internationally acclaimed virtual theater projects, The Orchard /an auction/ features Jessica Hecht and Mikhail Baryshnikov and was most recently seen for an Off-Broadway run in New York. This groundbreaking piece is an adaptation of The Cherry Orchard by Anton Chekhov as translated by Carol Rocamora.

The Orchard /an auction/ is a unique online experience, available worldwide.  Audiences from around the globe are invited to gather in real time for the auctioning of our cherry orchard, and to travel with the characters of the live Orchard performance through an interactive journey with this family in crisis as they face the loss of their home, their land, and the world as they know it.

To create the rich, immersive world of The Orchard, Golyak worked with an international team of collaborators from across the globe, spanning gaming, film, theater, robotics, and emerging technologies, with Scenography by Anna Fedorova, Lighting by Yuki Nasake Link, Costumes by Oana Botez, Sound Design by Tei Blow, Projection Design by Alex Basco Koch, Robotics by Tom Sepe of dotdotdash.io, Camera and Effects Design by Eric Dunlap, and Interactive Narrative Design by Tom Abernathy.

Audiences gather on a website and then enter the ephemeral, blue, lost world of the orchard which is inhabited by a giant, Kuka robot arm and layered with vivid live video elements, where they meet a fragile family trying to keep their lives from coming apart.

“It’s a dream to be bringing The Orchard to audiences globally in partnership with this powerful group of theaters! And it’s exquisite having Jessica and Misha leading our beautiful cast. This is a story about the delicate relationships at the center of a family facing the end of the world as they know it. We are living through an unimaginable time of change and upheaval with the war in Ukraine and the pandemic. The loss of the cherry orchard is the loss of our world as we desperately try to stay connected and keep things from falling apart. Creating this in New York was an incredible launch for The Orchard, and it means so much to share it with audiences online at this exact moment,” says Golyak.

“The Orchard is fascinating because we keep iterating it. It has been a true labor of love and an adventure to produce, and it is evolving as we share more performances in person and online. I have honestly never been part of a team like this and it is thrilling to work with such incredible collaborators pushing the edges of theater, film, gaming, robotics, projections, narrative, and video effects, and with such a stellar cast. It’s visceral, and high tech… and human; I promise it is like nothing you have experienced before,” says executive producer Sara Stackhouse.

Sara Stackhouse, Executive Producer, is Managing Producer at Arlekin Players Theatre & Zero-Gravity (zero-G) Virtual Theater Lab where she executive produced The Orchard Off-Broadway in New York, produced WITNESS, and co-produced chekhovOS /an experimental game/ and the international tour for State vs Natasha Banina. She is the Creative Director of The Mama Project (South Africa), and was a founder of BroadBand Collaborative. She was Founding Executive Producer of Actors’ Shakespeare Project, Chair of Theater at Boston Conservatory at Berklee, Supervising Producer of INSIDE This Old House at A&E/Time Warner, and Project Manager for cellist Yo-Yo Ma where she was on the producing team for nine films, including the award-winning film series Yo-Yo Ma: Inspired by Bach.

Jessica Hecht, Ranevskaya, received an Emmy Award nomination for her performance in the Netflix series SPECIAL.  She has been seen on television in the limited series SUPER PUMPED and THE LOUDEST VOICE and in her recurring roles in THE SINNER, DICKINSON, THE BOYS, and SUCCESSION.  She is also recognizable to television audiences as “Susan Bunch” on the iconic television series FRIENDS and “Gretchen Schwarz” on BREAKING BAD.  She has also played memorable roles on BORED TO DEATH, HIGH MAINTENANCE, FALLING WATER, THE SINGLE GUY, and RED OAKS.  Her film performances include A+, ANESTHESIA, J. EDGAR, THE GREY ZONE, THE SITTER, MY SOUL TO TAKE, DAN IN REAL LIFE, SIDEWAYS, THE ATLANTIC CITY STORY and THE SUNLIT NIGHT.  An acclaimed stage actress, Hecht has appeared on Broadway in productions of THE PRICE opposite Mark Ruffalo, FIDDLER ON THE ROOF opposite Danny Burstein, THE ASSEMBLED PARTIES opposite Judith Light, HARVEY opposite Jim Parsons, AFTER THE FALL opposite Carla Gugino, THE LAST NIGHT OF BALLYHOO opposite Paul Rudd, BRIGHTON BEACH MEMOIRS opposite Laurie Metcalf, JULIUS CAESAR opposite Denzel Washington, and A VIEW FROM THE BRIDGE opposite Liev Schreiber and Scarlett Johansson for which she was nominated for a Tony Award for her performance. Off-Broadway, she has appeared in KING LEAR opposite John Lithgow and Annette Bening, STAGE KISS opposite Sandra Oh, THREE SISTERS opposite Maggie Gyllenhaal and Peter Sarsgaard, and at Lincoln Center Theater in ADMISSIONS for which she received an Outer Critics Circle Award nomination and an Obie Award.

Mikhail Baryshnikov, Firs, was born in Riga, Latvia and lives in New York City. Baryshnikov has distinguished himself as an extraordinary dancer and performer in theater, television and film. In a career spanning more than 50 years, he has worked with George Balanchine, Jerome Robbins and many other illustrious choreographers and directors. On Broadway: Metamorphosis (Steven Berkoff) . Off-Broadway: Beckett Shorts (JoAnne Akalaitis). National and international tours: Forbidden Christmas, or the Doctor and the Patient (Rezo Gabriadze), In Paris (Dmitry Krymov), Man in a Case (Annie-B Parson and Paul Lazar), Brodsky/Baryshnikov (Alvis Hermanis), The White Helicopter (Alvis Hermanis), The Old Woman (Robert Wilson), Letter to A Man (Robert Wilson). Current film installation NOT ONCE. (Jan Fabre). Baryshnikov is an Academy Award and Tony Award nominee and Emmy Award recipient, the Kennedy Center Honors, and the National Medal of Arts. He was Artistic Director of American Ballet Theater (1980-89) and co-founder and dancer of White Oak Dance Project (1989-2000). He is the founder and artistic director of Baryshnikov Arts Center.

Seth Gore, Trofimov, is a Deaf bilingual creative house. Specializing in interplay between English and ASL languages, arts, teaching and technology, Seth allows his deafness to permeate and influence his work. His work is centered around signed language and effective and authentic human communications. As Director of ASL and ASL Coach for several Hollywood and Broadway productions, including Paramount’s A Quiet Place 2, Freestyle Love Supremeand To Kill a Mockingbird in MSG, Seth ensures the signed message gets through to the audience. He lives in New York City and currently is developing signed script collaboration solutions (Visual Script) and English grammar learning (Grammar Shapes) and teaching workshops (Unlearning Words) that aim to unlock people’s signed thought and make their communications more whole.

Elise Kibler, Varya, has appeared Off-Broadway in Is Edward Snowden Single? (The Pool Plays), All the Natalie Portmans (MTC), Mies Julie (Classic Stage Company), Napoli, Brooklyn (Roundabout Theatre Company), Indian Summer (Playwrights Horizons), London Wall (Mint Theater). She has also been seen on Broadway in The Heidi Chronicles and This is Our Youth. She trained at NYU Maurice Kanbar Institute of Film & TV. Elise is also a writer and filmmaker.

Carol Rocamora, Translator, is an educator, translator, playwright, and theatre critic. Her three volumes of the translations of Anton Chekhov’s complete dramatic works have been published by Smith & Kraus.  She is also the author of the biography entitled Anton Chekhov: A Life in Four Acts.  Her dramatic adaptations of 20 Chekhov short stories have been published in a two-volume collection entitled Rubles.  Her play “I take your hand in mine…”, based on the correspondence between Chekhov and Olga Knipper, has been translated in numerous languages and produced around the world. She serves on the faculties of New York University’s Tisch School of the Arts and the Juilliard School   She is a member of the American Theatre Critics Association, the International Association of Theatre Critics, Outer Critics Circle and Drama Desk.

Arlekin Players Theatre was founded by Artistic Director Igor Golyak in 2009 and has since toured to New York, Chicago, and Hartford, as well as to international festivals in Russia, Armenia, Ukraine, and Monaco. Arlekin received worldwide acclaim, including two New York Times Critic’s Picks, for their groundbreaking virtual theater projects during the pandemic, including of State vs Natasha Banina and chekhovOS /an experimental game/ featuring Mikhail Baryshnikov as Anton Chekhov. Arlekin has received multiple awards for its work including four 2020 Elliot Norton Awards from the Boston Theater Critics Association for recent productions of The Stone and The Seagull. Arlekin takes strong pride in their emphasis on self-identity; they are a company of immigrants performing works that play on the ideas of cross-culture, home, and traditions, challenging

the idea of nationality, and finding common themes that unite us all. In 2020, Arlekin launched its Zero Gravity (zero-G) Virtual Theater Lab to explore new theater possibilities for a new time. The company makes its home in Needham, MA. In response to the war in Ukraine, Arlekin launched #Artists4Ukraine, an initiative to engage artists and audiences to raise funds for humanitarian aid and stand in solidarity with artists in Ukraine. For more information, visit www.arlekinplayers.com and www.zerogravity.art.