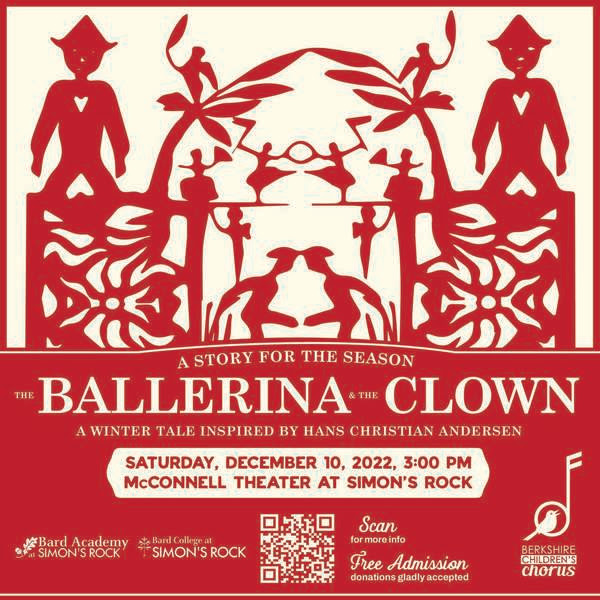 On Saturday, December 10th at 3:00 p.m., the Simon’s Rock Chorus & Madrigal Ensemble and Berkshire Children’s Chorus with the Simon’s Rock Dance Program will perform A Story for the Season: The Ballerina and the Clown in the McConnell Theater at the Daniel Arts Center.

The concert will start with individual sets of music presented by Berkshire Children’s Chorus, Simon’s Rock Chorus, and Simon’s Rock Madrigal Ensemble. The second half of the program will bring Berkshire Children’s Chorus together with Simon’s Rock Chorus and Dance students to tell the story of The Ballerina and the Clown – a multi-movement work by Libby Larsen (b. 1950) that was inspired by the storytelling and paper cuttings of Hans Christian Andersen. Singers will be accompanied by harp and the performance features multi-media projections and new choreography.

Masks are required. Doors open at 7:00 p.m. The concert begins at 7:30 p.m. on December 9th and December 10th. For more information visit: https://simons-rock.edu/events/index.php?eID=7439

Ryan LaBoy, conductor Praised for his collaborative spirit and eclectic music programming, Ryan LaBoy is a singer, conductor, and educator, currently serving as Artistic Director of Berkshire Children’s Chorus and Choir Director at Bard College at Simon’s Rock. He also sings with Twin Cities-based chamber ensemble, Border CrosSing, which recently released their debut album “Un Milagro de Fe”t to critical acclaim, and is the 411 Youth & Education Advisor for GALA Choruses–an organization dedicated to empowering LGBTQ+ choruses. Before moving to the Berkshires, Ryan spent three years as Director of Choirs & Voice at North Hennepin Community College (Brooklyn Park, Minnesota) where he conducted Concert Choir and Chamber Singers and led the Voice Studio, and served as Founding Music Director of ComMUSICation—an El Sistema-inspired choral youth-development program in St. Paul, Minnesota—leading them to performances with Grammy Award-winners like the Minnesota Orchestra and Leslie Odom, Jr. (Super Bowl LII). Ryan holds degrees in Choral Conducting and Music Education from the University of Minnesota and Westminster Choir College, respectively, and lives in Pittsfi eld with his husband, Joel, and their pets, Ruby and Dash.

Manon Hutton-DeWys, piano Classical pianist Dr. Manon Hutton-DeWys has performed in some of classical music’s best known venues, including Carnegie Hall and the Salle Cortot at the École Normale de Musique in Paris. She has also appeared at Symphony Space, Bargemusic, the Metropolitan Museum of Art, and Steinway Hall, among others. She holds degrees from The Graduate Center (City U. of NY), Mannes College, Bard College, and Bard College at Simon’s Rock. www.manonhuttondewys.com

Elizabeth Morse, harp  Elizabeth Morse, principal harpist of the Berkshire Symphony and Artist Associate in Harp at Williams College, has been active throughout the Northeast as a soloist, recitalist, chamber musician and pedagogue. She was formerly principal harpist with the Rhode Island Philharmonic and assistant director of the Boston University Tanglewood Institute Harp Seminar. An advocate of contemporary music, she has premiered and commissioned works of dozens of composers

Kati Garcia-Renart, choreography  Choreographer and dancer, Kati Garcia-Renart, trained in Madrid, where she pursued research studies in flamenco dance and pedagogy. She has performed in various venues in Spain and throughout the United States. She was the director of the Kaatsbaan Academy of Dance in Tivoli, NY, and was a long time faculty member of Kaatsbaan’s Extreme Ballet (summer intensive course). Kati currently serves as professor of dance at Bard College at Simon’s Rock.

Bard College at Simon’s Rock is the only college in the country specifically designed for students ready to enter college after the 10th or 11th grade. Simon’s Rock offers a curriculum in the liberal arts and sciences, taught by supportive, highly trained faculty, who are leading scholars in their field. The College grants degrees in more than 35 majors. Simon’s Rock is ranked No. 4 for Most Innovative School and No. 5 for Best Undergraduate Teaching by U.S. News and World Report and The Princeton Review ranked Simon’s Rock among the Best Regional Colleges in the Northeast.

Bard Academy at Simon’s Rock is the nation’s first two-year boarding and day program designed to prepare 9th and 10th graders to start college early. Within six years of entering Bard Academy as a high school freshman, a student who matriculates into the College will earn a Bachelor of Arts degree. The Academy curriculum is designed and taught by college professors.