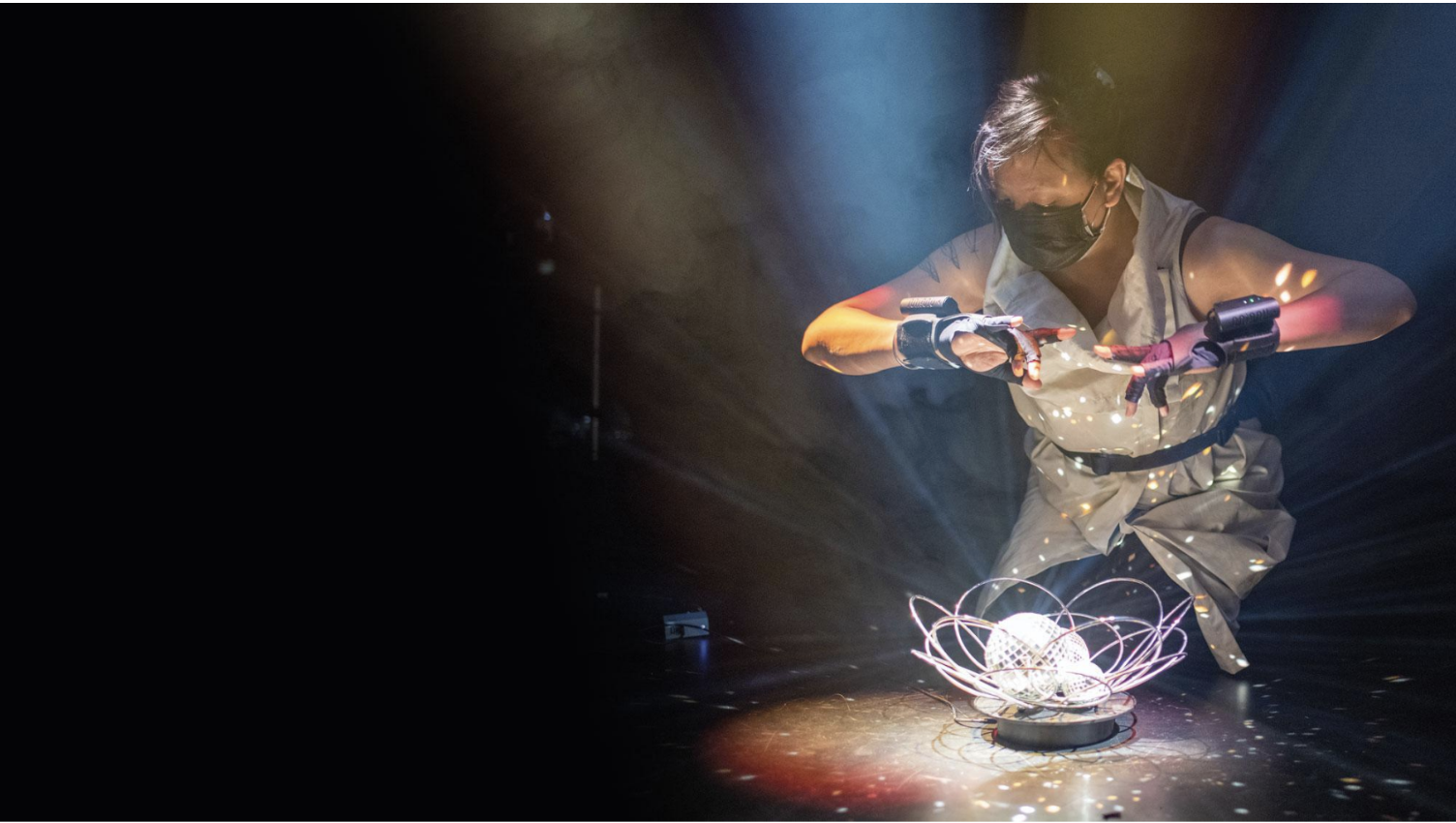 At EMPAC, artists have creative liberty to pursue collaborations with others working not only in the fields of visual and performing arts, but also in science, new media, and technology. Hence, the Spring 2023 season features programs by artists from around the world that bridge disciplines, medium, and subject matter–sculptors working with composers, visual artists with sound artists, a music/documentary-theater hybrid with an 18-person live orchestra, and a large-scale dome installation currently being designed to host performances with integrations of immersive VR, projection, and spatial audio. These artists are working with new and evolving technologies developed at EMPAC to explore political, social, and global issues with an eye to how new art forms can open up imaginative spaces for rethinking the future.

One of the most celebrated and prolific choreographers of her generation, Daina Ashbee is a Canadian choreographer who makes the US Premiere of her first group show J’ai pleuré avec les chiens (Time, Creation, Destruction) at EMPAC in Troy, NY (January 11). The production, a cathartic, revelatory, transformative experience about the rebellious potential of the human body in performative spaces, has already been staged in a handful of major cities outside the US. Two more performances follow at Gibney: Agnes Varis Performing Arts Center in New York City (January 13 & 14).

Cuando las nubes eran las olas / When the clouds were the waves (January 13) is a live performance installation by two EMPAC artists in residents, the Venezuelan-Ecuadorian artist Ana Navas and Venezuelan composer Mirtru Escalona-Mijares, which explores the afterlives of the Venezuelan modernist art movement at a time of political and economic upheaval for the country. They pay homage to Alexander Calder’s panels in the Aula Magna, the main auditorium in the Central University of Venezuela in Caracas, and the commonalities the Aula Magna shares with the EMPAC concert hall, where the show will be installed and performed.

Music curator Amadeus Julian Regucera’s first program at EMPAC is A Kind of Ache (January 27), an hour-long performance by the contemporary, experimental chamber music duo The Living Earth Show, whose mission is to foreground voices, perspectives, and bodies, particularly those of non-white and queer artists, that mainstream classical music has traditionally excluded. Sarah Hennies, a composer and percussionist whose works explore queer and trans identity, composes the original score. Terry Berlier, who investigates queerness and ecologies in her art, designs a sculpture-turned-instrument that the duo and Hennies will perform on. This is the kick-off to The Living Earth Show’s multi-season residency with EMPAC, with another engagement slated for Fall 2023.

In February, EMPAC presents the world premiere of Paper Pianos (February 25) by Armenian-American composer and documentarian Mary Kouyoumdjian and South African-American director and writer Nigel Maister, and performed live by the acclaimed 18-person Alarm Will Sound orchestra with projections by Syrian visual artist Kevork Mourad. The evening-length music and documentary-theater hybrid explores the dislocation, longing, and optimism of refugees and the experiences of those who provide services to them.

Bora Yoon, a Korean-American electroacoustic composer, vocalist, and sound artist, and Joshue Ott, a creative technologist who designs custom softwares, apps, and interactive visual and audio experiences for concert halls, team up to premiere their multimedia concert SPKR SPRKL (March 18). Yoon and Ott use EMPAC’s Wave Field Synthesis Array to produce a visually and sonically stimulating composition based on a new forthcoming album by Yoon.

Later on in the season, Transtraterrestrial, a prequel and premiere of The Unarrival Experiments – Unconcealment Ceremonies (April 6), a long-term collaboration between EMPAC and queer/nonbinary/trans multidisciplinary artist Sage Ni’Ja Whitson, is installed in the EMPAC building. The installation features embodied performance, integrations of immersive VR, projection, and spatial audio in a custom-built 40’ x 15’ dome covered in painted organic matter. Whitson developed this performance dome structure in consultation with architects, engineers, and astrophysicists. In dialogue with Yorùbá Cosmology, astrophysics, and research on the “blackest black,” this iterative art work is designed to amplify the dark, centering the mysteries of dark matter and dark energy through a black, queer, and transembodied lens.

For the fifth year, EMPAC is collaborating with graduate students from Center for Curatorial Studies at Bard College (CCS Bard) on a public exhibition. This year focuses on Detroit techno, specifically the centering of the black body in techno music, in the work of scholar and music artist DeForrest Brown, Jr. The project engages with recordings from the artist’s new album Techxodus, which operates as a musical successor to the ideas in his recent publication Assembling a Black Counter-Culture (2021). The world premiere of DeForrest Brown’s Speakers That Speak To You at EMPAC (April 28) makes use of EMPAC’s extensive spatial audio capabilities and is curated by Katherine Adams, Liv Cunibert, Mary Fellios, Abel González Fernández, and Sidney Pettice.

Theatre Junction, winner of an EMPAC open call with CINARS, is a Canadian bilingual, multidisciplinary live art ensemble that is at EMPAC in May for a residency and work-in-progress showing (May 8). The production will lead an audience through four distinct rooms that feature live video feeds and live actors. The work is being developed at EMPAC and will premiere in Montreal in the Fall of 2023.

“This spring season at EMPAC hosts some of our largest and most intimate projects to date, all of which stretch sensory exploration and technical research in the arts in new ways,” says Vic Brooks, EMPAC’s Associate Director of Arts and Senior Curator of Time-based Visual Art. “As we continue to welcome audiences back to EMPAC, our curators and engineers are excited to connect the people of our region to this polyvocal program of expansive new works by our artists in residence, many of which have been in development for several years at the Center.”

Please let us know if you’d like to arrange for any interviews or would like media access to a performance, or if there’s anything else you need for coverage consideration.

2023 Spring commissions by EMPAC / Curtis R. Priem Experimental Media and Performing Arts Center at Rensselaer Polytechnic Institute are produced with generous support from The Andy Warhol Foundation for the Visual Arts, National Endowment for the Arts, New Music USA, New York State Council for the Arts with the support of the Governor and the New York State Legislature, and the Center for Curatorial Studies at Bard College.

Since its first commission in 2006, the EMPAC curatorial program has supported the commissioning, production, and presentation of ambitious performances and artworks that span time-based visual art, music, theater, and dance. The program’s polyvocal curatorial approach resonates through each project, generating time-based artworks that are diverse in content, method, technology, and audience experience. Alongside the curatorial program, researchers at Rensselaer use the infrastructure of EMPAC to expand the discourse at the intersection of digital technology and the human condition through a broad range of research projects in science and engineering that include cognitive computing, immersive visual and auditory environments, and physical computing. For more information, please visit empac.rpi.edu.

“One of the country’s most invigorating hubs for performance… When it puts on a public-facing show, it knows what it can do… At EMPAC, this memorable performance was just one in a series of important events… Keep an eye on EMPAC’s offerings.” – New York Times