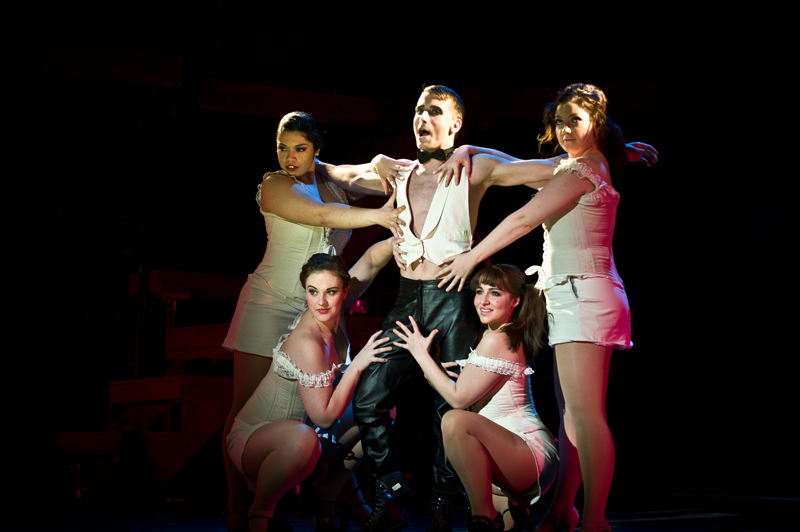 When John Kander and Fred Ebb wrote Cabaret, they of course hoped it would be a success on Broadway. Its success exceeded all expectations, especially with the release of the film starring Liza Minelli and Joel Grey. The songs are classic. Who doesn’t know at least some of the words to “Willkommen” which starts and ends the show.

Playing from April 7-17, 2011 on the stage of the Cohoes, New York Music Hall, directed by Jim Charles, there is only one more weekend to catch this classic, and with a fresh, young cast, we highly recommend it as one of our top picks. Performances are this Thursday to Saturday at 8:00 and on the weekend, there are two matinees, Saturday and Sunday at 3:00. Tickets are $25-35 and available by calling the box office at 518.237.5858 or visiting www.cohoesmusichall.com

An aspiring writer named Cliff Bradshaw has traveled to Berlin in search of inspiration when happens upon Sally Bowles at a cabaret called the Kit Kat Klub. She ends up moving in with him in a boarding house run by Fräulein Schneider and her suiter, Herr Schultz, a Jewish fruit-shop owner. As the Nazis grow stronger, everything is thrown into disarray.

Photo Gallery of the Show

Chris Chiles (Emcee) is a New York based actor originally from St.Marys, Ohio. Chris has had the pleasure to play such roles as Otto Kringlien in Grand Hotel at Ohio Northern University, Jack in Into the Woods at Findlay University Summer Stock Theater, Shroeder in Your a Good Man, Charlie Brown, Laurie in Little Women, Monostatos in the Opera Magic Flute and StewPot in South Pacific. Chris is excited to revisit the role of the Emcee and is excited to make his debut here at Cohoes Music Hall.

Jerry Christakos (Herr Schultz) has appeared here as Herbie in Gypsy, R.F. Simpson in Singin’ In The Rain, Roger Debris in The Producers, Julian Marsh in 42nd Street, Georges in La Cage Aux Folles, Captain/ Hennesey in Dames at Sea, Tateh in Ragtime, Fred Graham/Petruchio in Kiss Me, Kate, Captain Von Trapp in The Sound of Music, Henry Higgins in My Fair Lady, the Starkeeper in Carousel, and Christy Vann deCamp in Lovely: A Musical Comedy. He has also directed the Music Hall’s Sweeney Todd and Dracula, and created the wigs and headdresses for La Cage Aux Folles, Beehive and 42nd Street. Mr. Christakos created the role of Gabriel in the Broadway and London productions of Kiss of The Spider Woman, appeared Off-Broadway in Forbidden Broadway: Special Victim’s Unit, and toured nationally in Les Miserables (Enjolras), Andrew Lloyd Webber: Music of the Night and A Swell Party: The Cole Porter Songbook. He also appeared regionally as Daddy Warbucks in Annie at The Little Theatre on the Square, Billy Flynn in Chicago at the TriArts Theatre, Rev. John Witherspoon in 1776 and Mr. Ovington in How To Succeed in Business…; both at the Goodspeed Opera House. Other regional appearances include Arena Stage, Florida Stage, Actors’ Theater of Louisville, Coeur D’Alene Summer Theater and Arizona Broadway Theatre.

John Grieco (Cliff) is a 2009 graduate of Fordham University where he studied Computer Science. He recently appeared regionally in Sound of Music at the Fulton Opera House. Other regional credits include Curly in Oklahoma!, Billy Bigelow in Carousel, and Tommy in Brigadoon. New York credits include Three Wishes for Jamie (Musicals Tonight!) and a workshop of Finian’s Rainbow (Irish Rep). http://www.johngrieco.com

Ruthie Stephens (Sally Bowles) like her character, is also a travelling adventuress. After working for the Welsh National Opera as Dorothy in The Wizard Of Oz, Ruthie travelled the world as the singer aboard the Queen Mary 2. After this she began working at the Monte Carlo Casino also as a singer, before moving to New York where, amongst other things, she trains in aerial acrobatics at the Circus Warehouse. Ruthie is thrilled to be making her Cohoes Music Hall debut in Cabaret.