Mormons, Mothers and Monsters Fresh from the Musical Theatre Lab at Barrington Stage 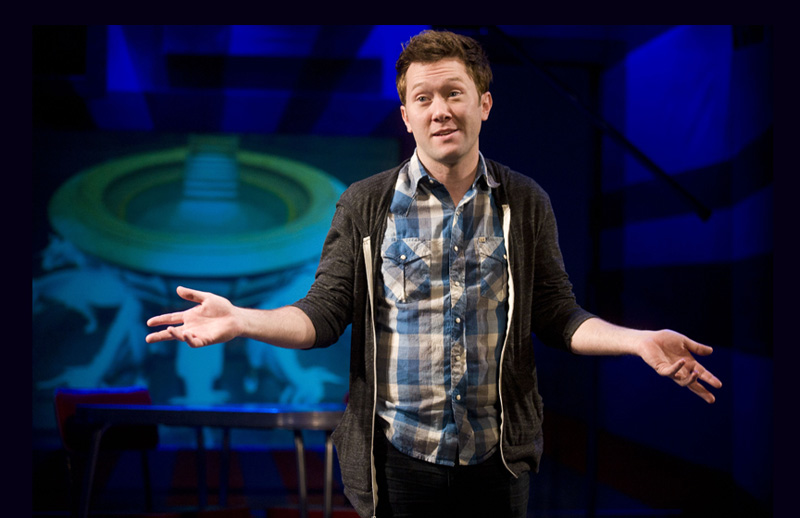 Mormons, Mothers and Monsters Fresh from the Musical Theatre Lab at Barrington Stage

Mormons, Mothers and Monsters is an entertaining new musical, with peppy songs, clever lyrics and a most unusual coming-of-age story. It revolves around an almost perfect son who turns out to be gay. He adores his Mormon mom. She does her best with some pretty defective husbands, dragging her little family through three divorces in her efforts to provide the both of them a family passport to Heaven.

In our lead photo above: Stanley Bahorek (photo by Kevin Sprague)

As a critic who has seen two large scale musicals done superbly in the past few weeks – both the Barrington Stage Guys and Dolls and Berkshire Theatre Group’s Tommy were stunners – it’s important to think of these lab shows as a sort of cabaret musical. The cast and forces are small. Most of them are not drawn from fully developed books but rather from the creator’s own lives and experiences. They have been created with but a few weeks of rehearsal and minuscule budgets and are taking their first baby steps towards the larger Broadway stage. They neither pretend to be fully developed musicals ready for the Great White Way, but rather a sort of personal musical evening to be shared by like minded friends. When we enter the theatre, we never know what to expect, and love the combination of surprises and new experiences. On that basis Mormons, Mothers and Monsters succeeds brilliantly, and has already begun to find its audience.

The Musical Theatre Lab at Barrington Stage has distinguished itself by finding and nurturing young talents at the earliest stages of their development. William Finn, the Artistic Producer of these efforts may have a mantle full of awards, but he knows firsthand how difficult it is to get an idea to the stage. This lab has provided a means to get new voices in musical theatre heard and discussed. Sam Salmond (Book and Lyrics) and Will Aronson (Music) are no doubt looking foward to both the public’s reaction and the critical comments, albeit with a mixture of dread and excitement.

So how did they do? Not bad, first time out of the gate. But there is a bit of an issue with the subject matter, touching as it does on religion, defective husbands and the ordeal connected with coming “out”. Among the older generations these are subjects that are studiously avoided, while younger people talk easily about phony faiths, farting, friending and, um, fucking. It is likely that the partisans who love this musical will be younger, more open to ironic and authentic discussion of these subjects while the older crowd is likely to use euphemisms like “boring” and “tiresome” to signal their discomfort with the subject matter. (7/22: Indeed one review reads:”Neither the wearisome material nor the even more wearisome performances give us any reason to care…”) But there are no hard and fast rules here.

Mormons, Mothers and Monsters is a totally original new work by two major new talents. The boy in the story is buffeted by successive divorces and finds himself named first Samuel Liam Doherty, then Samuel Liam Wood, and finally Samuel Liam Salmond. It is natural to conclude that this is drawn from the life of the book and lyric writer, Sam Salmond.

Its subject matter delivers insights into formerly hidden aspects of everyday life for many young children in pseudo-religious and abusive households. In this story with its pedophile, murderous and abusive husbands, the worst thing was not the beatings, but the words said by one father to his son as he left: “No matter what you do, you will never be worthy of love.” To which the narrator comments: “Why did you let yourself feel anything for him? He was a monster.”

But of course the son does find love, not in the dysfunctional families, for one brief moment at least, with another young man inside a Mormon Temple. Or was it all just a fantasy…

The cast is superb with highest praise to Jill Abramovitz as the mother. She wears her character like a glove, a perfect fit of parental devotion and doting on a perfect son played by the exceptionally childlike Taylor Trensch. He manages to convey the passage of the years with a combination of innocence and inventiveness. As the defective husbands – and monster – Adam Monley uses a variety of caps, clothes and characterizations to differentiate them all.

As our guide and narrator, Stanley Bahorek is both the boy’s inner voice and conscience, fading in and out of the story as needed to fill in the gaps. But he alternates between real memories and false ones. It works to show the confusion of the boy. Still his character is mostly a device that enables the tale to move – and sometimes lurch – forward. Here I wonder if the use of this one man Greek chorus helps or hinders the flow of the musical.

Director Adrienne Campbell-Holt not only kept things moving, but added the many flourishes that kept the whole enterprise feeling light and fluffy even as it dealt with heavy subjects. Vadim Feichtner kept the musical direction under a tight reign, and it never overshadowed the players, yet hammered some of the songs into my memory.

Several songs stand out, most notably “God Made Everything Good” which is one of the songs first introduced last Labor Day weekend at the annual Bill Finn “Songs by Ridiculously Talented Composers…” event. “Hump the Pole” and its attendant stage business made some of us blush a bit, but it rang true. I knew an MIT student who did the same thing hanging from a door. Those who have vanilla lives have no idea…or do they?

There is nothing more difficult in theatre than putting a musical together, and you can imagine just how tough it is for writers and composers who have barely finished their formal training and have only begun to accumulate the real world experience that ultimately provides the depth of great writing. Of course this is exactly the reason the Musical Theatre Lab exists, to provide that very commodity.

Over the past half dozen years or so, Barrington Stage has offered more than a dozen such small-scale musicals to its devotees. Some have lit the stage and then quickly faded from view. Some, like The Burnt Part Boys have gone on to success off-Broadway. Sometimes it provides a showcase for actors to evolve. One that comes to mind is Aaron Tveit from the Music Lab’s Calvin Berger. He now stars in Catch Me if You Can on Broadway. Others continue their development process in other musical theatre labs in other cities.

Mormons, Mothers and Monsters has good bones, and deserves to go further than just this lab production. As marriage equality becomes more accepted, and musicals about Mormons have become a proven Broadway cash cow, this musical may emerge as one of the first to conflate the subjects of religion and being gay into an evening that is both entertaining and informative.

The Musical Theatre Lab as usual gets my vote as being the bravest new works incubator around. Mormons, Mothers and Monsters may be a bit of a preemie, so lets hope it survives to grow up and fulfill its potential.