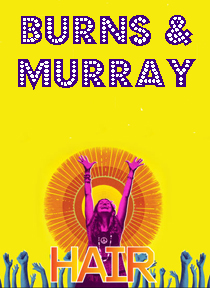 Larry Murray: Gail, you did it again with your crazy fashion choices, I am trying to hide from the groupies, and you decide to go all hippie on me. That tie-dye top with the bell bottoms and purple Birkenstocks was so outré, you had the cast members traipsing over to see the outfit even before the show began.

Gail Burns: I gotta be me, Larry! Isn’t that what 1960’s fashion was all about? But it was alarming to be the ONLY person, other than the cast, in tie-dye…

Larry: Well perhaps I’ll buy a camouflage hoodie and sunglasses to don when you play dress up for the theatre. I don’t want people to think I had anything to do with it. Hell, even a fellow critic passed us by without saying hi, I think he was aghast. I am afraid of what you might choose to wear for Amadeus, you don’t have any powdered wigs at home, do you?

Gail: No wigs in my closet, but there were plenty of great ones, and one or two clunkers, on stage at Cohoes. My son joked that you should really cast “Hair” a year in advance so everyone has time to grow the required locks before opening night. Comparing the cast’s head-shots online with what we saw on stage proved how times have changed.

Larry: The cast of Hair had some pretty frizzy looks, and they really shook it. Tunisia Renee who brought the opening number “Aquarius” to life was wonderful. And I couldn’t help but admire Amanda Nicole Marasch who delivered a heart rending “Frank Mills”. So who impressed you?

Gail: Alex Mace as Berger and Jack Bartholet as Claude were just about perfect.

The most touching sequence when the actors left the stage through the auditorium while they were singing, and we could hear them receding into the background, which was an absolutely magical moment as the echoes died away. That moment alone was worth the trip to Cohoes. But there was another memorable surprise, an actor in the chorus who simply stood out from all the rest…he had extra energy, great extension as a dancer, and from his exuberance I suspect he was having the time of his life.

Gail: I noticed that member of the tribe, too. He was always a little more energetic. I think his hame is Cameron Bartell, and he was one of the three men who did “Crazy for the “Red White and Blue.”

Larry: He kept stealing my eye during the ensemble numbers, too. He’s someone to keep an eye on for sure, though if there was a dance captain, I suspect he would be told to tone it down a bit, to “blend in” not “stand out.” But the others should have turned it up a notch or two as he did.

Gail: I have to say that overall it has to be the costumer, Kate DeShazo, she really nailed the look. The temptation is to go too bright and colorful, too Austin Powers, which is NOT what the Hippies were all about. That was Carnaby Street. In his New York Times review of the 1968 Broadway production of Hair Clive Barnes assured his readers that the cast bathed. This was important information because real hippies didn’t, and therefore were not people you wanted to be confined at close quarters in a theatre with for long periods of time. Director Janie Wallace and her team struck an excellent balance between authenticity and hygiene. Even the “brief, dimly lit nudity” at the end of Act I was remarkably tasteful.

Larry: “Dimly” lit or “barely” lit? The restrained lighting may have been artistic and safe, but it was a bore. And they clumped the company together masking most of what has been – in other productions – a scene of touching vulnerability. For Cohoes the nudity was just a stagy silhouette. They played it pretty safe with the flag scene, too. I don’t think the American Legion is likely to be upset, the veterans there treat flags far more harshly at their ritual flag retirement ceremonies than we saw onstage. Happily the other controversial element was left intact – they did not downplay the language. That remained as gritty as in the original production.

In mmost respects the production does a masterful job of recreating the spirit of the 60’s. As I recall, the original production had a rocky start, not too many critics actually liked it. In its first incarnation the top ticket price was all of $2.50. Some writers made a point of saying how much older their audience was than those on stage, and that there were no hippies to be seen in the theatre.

Gail: Well, I was too young to see the original (blushing coyly), but I wasn’t a babe in arms. I was about ten and I knew that even at the time of its success off-Broadway in 1967 and on Broadway from 1968-1972. Hair was considered a sanitized and crassly commercial version of reality. No wonder that we look at it now, 45 years later, and wax deeply nostalgic. Here we have the past as we wish it were – happy, tuneful, innocuous, fake.

Larry: Although it purports to celebrate the counter-culture, they pretty much ignored Broadway as old fashioned, and in fact it was when off and off-off Broadway really took off.

I think Hair is really a tribute to the energy and spirit of youth, with all of the contradictions and imperfections that implies. The energy on stage at Cohoes was amazing, I think it could have powered the whole city for a week. It may have run a total of two and a half hours plus intermission, but it went by in a blur. Forty songs and most were only a two or three minutes in length.

Gail: Although I remember the songs being ridiculed back then, but now it is clear that Galt MacDermot’s score is a classic. It is almost completely sung through and the range of musical styles is impressive. The Cohoes Music Hall band, under Josh Zecher-Ross’ baton, was flawless. I loved having them on stage.

Larry: I found Janie Wallace’s direction dynamic for the cast of twenty. I felt exhilarated just watching them go through their paces, they never stopped. And the music was almost perfectly balanced. The band not only sounded fabulous, but was the gas that powered the singing and dancing.

Gail: But while I adored listening to that superb cast belt out MacDermot’s rousing tunes and Gerome Ragni and James Rado’s raw and funky lyrics, the show as a whole made me deeply sad. Young people in the 1960’s took their anarchy and demands for social justice and change very seriously. They made plenty of mistakes, young people always do, and they also created an astonishing shift in American culture, but in so many substantive ways it is obvious that they failed, we failed, and that is tragic.

Larry: There are so many parallels to the current political scene and Occupy Wall Street. Many people think its main focus was on the war in Vietnam, but Hair also addresses two or three other wars that continue to this day. The race war which has come a long way, and the drug war which has not. The sexual revolution started then, and continues to this day with Marriage Equality being slowly adopted. But we have only come part way, and the military industrial complex remains omnipotent, with it being almost superseded by the Corporate oligarchy.

We were a sharply divided nation generationally then, and we are polarized, red-blue, left-right today. I wonder, Gail, can you talk about Hair without talking about Politics?

Gail: No, absolutely not. As a mother raising children during decades that were increasingly restrictive and isolationist, I strove hard to give my sons the breadth of choice and viewpoint that I saw as the best of the 1960’s efforts. Hair is simultaneously great entertainment and an excellent way to engage young people in a dialogue about how times have changed in the past forty-five years – what has been accomplished and what still lies ahead for their generation to tackle.

Larry: I think people should go see Hair for themselves, whether for nostalgia or for fun since it is both. It may be a long time before something this unusual, and good, comes along again.

So do you know if we are now actually living in the Age of Aquarius and what that signifies?

Gail: We are now officially shifting into the astrological Age of Aquarius, Larry. Each astrological age, resulting from the very slow processional movement of the Earth’s rotation, is approximately 2,150 years long, on average, so Hair’s creator’s were correct in saying that that was the “dawning” of the age. We are still shifting out of the Age of Pisces.

According to sources cited on Wikipedia: “Ages are believed by some astrologers to affect mankind while other astrologers believe the ages correlate to the rise and fall of mighty civilizations and cultural tendencies. Aquarius traditionally “rules” electricity, computers, flight, democracy, freedom, humanitarianism, idealists, modernization, astrology, nervous disorders, rebels and rebellion. Other keywords and ideas believed associated with Aquarius are non-conformity, philanthropy, veracity, perseverance, humanity and irresolution.”

Larry: Time to wrap it up, and without revealing the end, the musical did have a point to make. For all the individuality we each can muster, it can quickly be shorn away with the simple buzz of a haircut and the donning of a uniform. In a way, Once in the same costume, it’s difficult to tell people apart and being forced to march to another’s tune is never good for the soul.

Gail: In the rewritten version of Hair, Claude says: “you’re living right smack bang in the middle of the Stone Age? Well, this folks, is the Web 2.0 Psychedelic Cybertastic Stone Age. Without a doubt, the most exciting time this weary, whirling square globe has seen for generations. And it’s your age… you are living it, you are psyching it, you are stoning it, you are blogging it, you are texting it.”

Larry: Time to get to work doing just that, blogging it, texting it, making sure people know about it. It gets a big nod and a “go see for yourself” from both of us.

Next up, Burns and Murray banter about Amadeus, now playing at Hubbard Hall in Cambridge, New York.