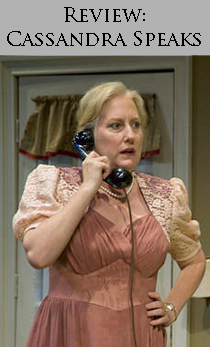 A Theatre Review by Larry Murray

You have to see Cassandra Speaks, it is a wonderful play, it’s as simple as that. Actor Tod Randolph and writer Norman Plotkin have plucked Dorothy Thompson from the dust of history and underserved obscurity and brought her amazingly, even brilliantly, to life again.

Dorothy Thompson was a pioneer and a professional. She wrote a widely syndicated newspaper column for 22 years that was read by millions. She was, in many ways, the Oprah of her day. And it wasn’t easy being her. I can imagine how many times she would hear things like: “You write just like a man,” as if digging for facts and finding news stories was just for little boys.

An important voice in the years leading up to World War II, she accurately saw the coming conflict and horrific genocide of the Jews, yet few listened to her warnings. In Vienna, she forced herself to learn how to read and speak German. She interviewed Hitler in his early days. She knew what was going on having read his pamphlets, and trailed him into the beer halls and rallies of the haters, those who were looking for a scapegoat for their own failed hubris.

She was a friend of – and almost as well known as – Eleanor Roosevelt. She was, for many years, married to – and outshone – the notorious drunk Sinclair Lewis.

In fact, up until the time that journalist Dorothy Thompson began to cover the politics of war and hatred, women tended to get their political opinions from their husbands.

As someone who always thought for themselves, Dorothy Thompson was a handful growing up in the miserable snowy environs of Buffalo, New York. In her twenties she worked to advance the women’s suffrage movement. Then she went to Paris and turned to writing and reporting. Back in the days when getting posted to a foreign capital was considered either a hardship or a punishment, male reporters shunned the assignments. She ended up in Vienna and found her first regular assignment. It didn’t pay much either. But Dorothy Thompson saw this as an opportunity to write about more than women’s fashions, food and family life, a role that automatically went to women in the day, and sadly, is often still the case.

In Cassandra Speaks, Tod Randolph slips into the character of Dorothy Thompson as if it were her own life being portrayed on stage. Norman Plotkin’s play is part biography, part re-imagining what Thompson’s life must have been like, writing, lecturing, organizing and getting married three times, raising a son and giving advice to politicians and political movements. She was – and on stage still is – a wonder to behold. The thought kept going through my head that people like her are rare as gold.

Disillusion comes only to the illusioned. One cannot be disillusioned of what one never put faith in. – Dorothy Thompson

As I wrote in an earlier preview in Berkshire on Stage, Dorothy Thompson really pissed off Adolph Hitler when she was in Germany, She told it like it is, and das fuhrer, not liking the truth to get around, expelled her, the first American correspondent he personally ordered out. Still she managed to interview the “little man” as she called him, and to read Mein Kampf which few Germans actually did. It was an anti-semetic polemic which she found a handy guide to WWII. “He told us what he was about to do, and he did it,” she says in the play.

That’s how she earned the title of the “First Lady of American Journalism.” Time magazine named her the most influential woman in the country, second only to Eleanor Roosevelt, and she was Michael Kanin’s inspiration for the 1942 comedy Woman of the Year.

That Thompson was her own person, a journalistic icon, and a complex person with both courage and brilliance is only part of it. She was a groundbreaking pioneer of her day, and a timeless role model for the ages. These facets of her professional life mesh with her down to earth human emotions on stage in a delicate dance of dramatic exposition. The elements of this biographical story are so carefully woven together under Nicole Ricciardi’s direction, that Randolph needs only to bring the lines to life for us to ponder and admire.

Randolph does more than just act out her part, she glides into it, virtually donning Dorothy Parker in one of the most complex performances I have seen in years. It is an astonishing tour de force, and immediately puts her at the top of the list as the best actor of the year.

But even in a performance of near-perfection, sometimes there are small fault lines.

Cassandra Speaks is set on a very hot June day in which she is about to marry for the third time. In a bizarre coincidence, the audience was fanning itself throughout the play, the Elayne P.Bernstein Theatre’s air conditioning not being in use. The unfortunate result is that the audience left talking more about the heat and oppressive stuffiness than the play.

The set by Patrick Brennan was lovely and functional, centered around Thompson’s desk and typewriter, with sitting areas to entertain guests and conduct interviews. There was only one dress worn during the show, which you can see in the photos, designed, according to the program, by Kara D. Midlam. It was an inexplicable choice, but what do I know from fashion in 1943 when the play was set. As Thompson said in the play: “I don’t get to go shopping very often, and it was rather expensive.” That may explain it all.

In a a few days Berkshire on Stage will post another review of this play by Gail Burns and Roseann Cain, who will undoubtedly bring another set of opinions to the table.

Happily, Cassandra Speaks runs all summer at Shakespeare & Company giving you ample opportunity to meet this reporter and journalistic pioneer. She shaped the way international news is covered by combining daring reportage with both diligent research and observable fact.

Dorothy Thompson, Sigrid Schultz, and Helen Kirkpatrick were the first women reporters to cover the volatile political climate of central Europe in the 20’s and 30’s. They became the reining Grande Dames of foreign reporting before the second world war broke out. While derided by men as the “Cassandra’s of the Coming Storm” it is Dorothy Thompson’s prescience that is still with us today.

The prices are ridiculous… I don’t see how people can go back and forth to work or to school. How can we afford the gas?
Dorothy Thompson