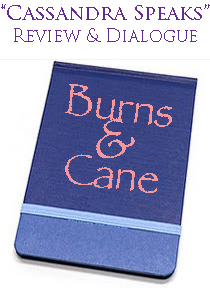 by Gail Burns and Roseann Cane

Gail: Before we start, I want to introduce BerkshireOnStage.com readers to my friend Roseann Cane. She is an actress and director based in Columbia County. She also has many years’ experience as a writer and editor. Roseann and I met in 2006 when I reviewed her performance in a production of “Social Security” at the Ghent Playhouse and we had a misunderstanding, which we turned into a wonderful friendship. I hope we are proof to the actors of the world that Theatre Critics ARE human, what do you think, Roseann?

Roseann: So long as we prove  – to the critics – that actors are human! Seriously, actors and theater critics share a common love, the theater, and a common goal, which is to celebrate it, share its bounty, and promote its growth. So here we are.

Gail: And I am so glad that “Cassandra Speaks” is the first show we get to write about together because it is about a ground-breaking female journalist, Dorothy Thompson (1893-1961). Sadly, arts journalism, and particularly theatre criticism, is still largely male dominated. We may be the first all female team to play in this league! How did you like the show?

Roseann: There is much to love about Shakespeare & Company, but I felt a decided frisson when you told me we were going to see “Cassandra Speaks.” I’m a sucker for plays that marry political significance and psychological insight. For years I’ve been intrigued by Dorothy Thompson. And I’d never seen Tod Randolph on stage, though I’d read great things about her.

Gail: I am a huge fan of Randolph’s and always look forward to seeing her on stage. This season we are in for a double treat because she is doing “Cassandra Speaks” in repertory through September 2 at Shakespeare & Company and then from August 15-26 she’s appearing as Edith Wharton in “The Inner House” at the Wharton Salon at The Mount – an adaptation by Dennis Krausnick of Wharton’s 1934 autobiography “A Backward Glance.”

Roseann: Well, I found Randolph delightful. What a radiant presence she has. From the get-go, she established a sense of intimacy, making me believe I was a confidante of the magnetic, resolute, vivacious woman Randolph was portraying. Nicole Ricciardi’s direction is sure and skillful. Indeed, the work of the entire production staff of this production is top-drawer. Patrick Brennan’s set, a comfortable, lived-in–yet–elegant office in the Barnard, Vermont home Thompson shared with her second husband Sinclair Lewis (1885-1951), is a beautiful piece of work. Kara D. Midlam’s lovely costume design completed the visual feast.

Gail: Brennan’s set is the first thing that catches the eye as you enter the Elayne P. Bernstein Theatre and it makes a great impression. When it was first mentioned that is had been Thompson’s home with Lewis I became excited that the play was set in Thorvale, Lewis’ home in Williamstown, MA, giving this show true Berkshire roots. But he bought that property after their divorce.

The play is set on June 16, 1943, the day of Thompson’s wedding to her third husband, Maxim Kopf (1892-1958), and Midlam’s flattering dusty rose cocktail dress perfectly fit the period–and Randolph’s figure.

I loved that playwright Norman Plotkin showed us Thompson as a fully three-dimensional human being. Too often influential women are reduced to giggly school girls or bitter spinsters by male playwrights in an attempt to “humanize” them. Thompson came across to me here as a strong, smart, independent woman with a flourishing career, many friends, the capacity to love, a healthy sex life, a son she adored, but who also had inner fears and vulnerabilities that we all share. But you know more about her life than I do, having read “American Cassandra,” the 1991 biography by Peter Kurth on which Plotkin based this play. What did you think of how she was portrayed?

Roseann: For all my admiration for Randolph, I found her work impeded by Plotkin’s flawed script. You see, I did think Plotkin made the mistake of “humanizing” Thompson the very way you describe, sometimes with the unfortunate result of reducing her to a stereotype.The 90 minutes of phone calls, flashbacks, and anecdotes are heavily punctuated with panic attacks and histrionic declarations about the impending marriage. She has to sit down, she feels faint and nauseous, she begs friends to advise her. Surely she is making a terrible mistake! She is horrible at marriage! Perhaps she really doesn’t love Max. She needed to rescue him from his tortured past, just as she’d needed to rescue second husband Sinclair Lewis from alcoholism. How can she be certain Max truly loves her?

Problem is, this is not a question of dramatic license. It is completely at odds with Thompson’s history. According to accounts by myriad friends and colleagues, she and Kopf were utterly in love. Moreover, Thompson fought to marry him. Kopf was inconveniently married to his third wife when he and Thompson began their secret, passionate affair. Thompson eventually arranged a substantial pay-off and a divorce for the third Mrs. Kopf.

Gail: That’s fascinating and sheds a whole new light on Thompson for me. Knowing that going in I think I would have reacted as you did, but since I went in a veritable Dorothy Thompson virgin, I enjoyed the woman I met as Plotkin and Randolph presented her.

What really struck me about the play and Thompson’s true life story, is the Cassandra aspect. In Greek mythology Cassandra is given the gift of prophecy by the god Apollo, but when she failed to return his love he also cursed her so that no one would believe her when she spoke. Thompson met and interviewed Adolph Hitler and actually read “Mein Kampf” (1925/1926), which not many did then or have done since. She spent much of her energy during the fifteen years before this play is set, in writing about and traveling around speaking about the threat he posed and how he planned to conquer Europe, if not the world. She knew the truth and spoke it clearly – Plotkin has her tell us at the start of the play that her newspaper column has a syndicated readership of 8 million – and yet NO ONE heard her or believed her. Absolutely astonishing and terrifying!

Roseann: I suspect that Plotkin used the device of Thompson’s wedding day to substantiate a theory that what drove Thompson was a deep-seated need for rescuing and caretaking. I don’t buy it. I think it minimizes and degrades her magnificent lifelong fight against injustice.

I was also disappointed that we heard almost nothing of Thompson’s son, Michael “Mickey” Lewis (1930-1975), and nothing at all of her beloved stepson, Wells Lewis (1917-1944), who was tragically killed in the very war Thompson strove so hard to warn the world of and to avoid.

Gail: But ultimately we both really enjoyed “Cassandra Speaks” finding it thought provoking while beautifully directed, produced, and acted. I would highly recommend it for people with high school and college age girls/women in their lives. Thompson, who started her career chronicling and supporting the women’s suffrage movement from her graduation from Syracuse University in 1914 until American women earned the right to vote in 1920, is a perfect example of what women can and should aspire to in their lives in these days when we are being referred to as barnyard animals by elected officials who would restrict our human rights.

Gail: By the way, I wore nothing particularly exciting to this opening since a reader complained that Larry and I talked too much about my wardrobe in our Burns & Murray dialogue. What were you wearing?

Roseann: Oh, dear. You noticed I left the chain mail at home. I was afraid of rust, so just my vintage Dr. Dentons and the usual tin-foil cap.

Cassandra Speaks runs from May 25 through September 2 in S&Co.’s Elayne P. Bernstein Theatre in Lenox with an official Press Opening on Friday, June 1 at 8:30PM. Tickets are $15-$50, and S&Co. offers a wide range of discount options, including discounts for groups, students, senior citizens, military, teachers and our very popular 40% Berkshire Resident Discount. To view a complete schedule, receive a brochure, or inquire about discounts, please call the Box Office at (413) 637-3353 or visit www.shakespeare.org. For customized group visits – which may include artist talkbacks, tours, and catered events – contact the Group Sales office at (413) 637-1199, ext. 132. Founders’ Theatre is hearing aid assisted and wheelchair accessible.