Review: “Fiddler on the Roof” Comes Vividly to Life at Barrington Stage 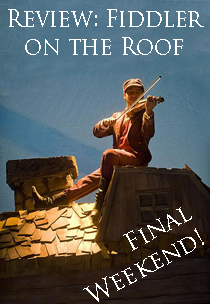 Review: “Fiddler on the Roof” Comes Vividly to Life at Barrington Stage

Julianne Boyd and Barrington Stage Company love to take chances. Big musicals require large casts and sets, and represent a serious financial commitment.  Sponsors (like Berkshire Bank) take a risk too. Happily,  if you ask anyone who was at Sunday’s opening of Fiddler on the Roof – which is the first musical of the Berkshire summer – Barrington Stage has once again staged a total and complete winner. It has everything. Make your plans now, you are guaranteed to leave the theatre with a whole raft of colorful characters dancing in your head, and humming some wonderful old fashioned tunes.

The major reason for this Fiddler’s success is its lead actor.

The role of Tevye is being played – for the first time – by Brad Oscar who opens the show with the popular song “Tradition” and then rockets to the heights as the musical unfolds. In the end we watch him  slowly hauling his milk wagon off the stage – now filled with a few household possessions – as the curtain comes down and the audience applauds and applauds until their hands are red. Opening night, there was a standing ovation to boot.

Back in 1964 when the original show opened, Howard Taubman of the Times wrote that if “Sholem Aleichem had known Zero Mostel, he would have chosen him, one is sure, for Tevye.” He might update that reference had he been able to see Mr. Oscar.

Brad Oscar portrays Tevye so perfectly, one can only think of that classic show business phrase: “Brad Oscar is Tevya.” He has even incorporated small bits of stage business that are a homage to his predecessors Zero Mostel, Topol and even Nathan Lane who once did a takeoff on the show. It’s a remarkably complex depiction which is ultimately uniquely his own.

You might say it takes a village to create a musical, and in the case of Fiddler on the Roof, nothing could be more true.

When the lights come up we are taken to the Russian hamlet of Anatevka in 1905 as the Tsar was evicting Jews from their villages. It is based on the Yiddish books of Sholem Aleichem about Tevye the Milkman, and dozens of other characters who were his neighbors.

So in fact, the village and its people are the heart and soul of this musical.

Another standout in this production is Joanna Glushak as Golde, his wife, who is as intimidating as she is hard working. She is the ultimate practical and grounded partner to a husband who clearly lets his heart rule as often as his intellect. In the second act when she sings “Do You Love Me?” with Tevye, we finally get a fleeting glimpse of the human side of her. Glushak’s portrayal is strong enough to stand up to, and on occasion, dominate their scenes on stage together. Such chemistry is wonderful to see.

Oscar’s Tevye is strictly his own creation, and makes this production fresh and new.

There are more than a dozen identifiable characters on stage and they all deserve credit for the uniqueness of the roles they created. All five daughters are wonderful, but especially Rebecca Kuznick (Tzeitel), Stephanie Lynne Mason (Hodel) and Dawn Rother (Chava).  The two youngest, Emma Grace Foley (Shprintze) and Abigail Schilling (Bielke) were charmingly naive and lovable.

Yente the Matchmaker (Rachel Coloff) was all-business, all-the time, and Motel the Tailor (Colin Israel) was perfect in his role. Alexander Levin as Perchik the revolutionary student and teacher delivered a solid reading, as did Jason Simon as Lazar Wolf, the Butcher.

I was especially impressed by Travis Nesbitt who played one of the Russian Soldiers, but perhaps it was for the frustrated humanity he represented in a story of Jews and Gentiles alike ,both of whom seemed to have blinders on.

Present at the performance was the lyricist for Fiddler on the Roof Sheldon Harnick, who worked with Jerry Bock (composer) and Joseph Stein the writer of the book. Earlier he regaled a rapt audience of his own at a free Barrington Stage “Conversations with….” in the same theatre. His ability to conjure up the days of the musical’s creation and journey from idea to one of the most popular musicals ever written helped give the performance that followed an almost historic aura.

Like the original production of Fiddler which was both choreographed and directed by Jerome Robbins, this production had just one leader for both elements as well, Gary John La Rosa who formerly was a Berkshire actor, now making his BSC directing debut. He has staged 200 productions elsewhere and his experience and panache are very much on view. The dance elements were as strong as the dramatic ones, and were so ingeniously integrated it is hard to remember where one left off and the other began.

Dance is a very big component of Fiddler, since the fantasy and dream sequences are so essential to filling out the character’s identities. So too are the dances of celebration, as at the wedding scene. Choreography also helps move two dozen people on and off stage seamlessly, in just a matter of seconds. The quartet of Russian dancers was appropriately showy while the trio of Sisters were heavenly and etherial. The artistic highlights of the evening, both turns were all too brief. It was clear that the dancers put in lots of time in rehearsal to perfect the unity of their movements, and as a result they are delivering Broadway class performances.

On stage there are 27 people in the cast, (BSC’s West Side Story had previously set the mark at 24) while in the pit, there’s the largest orchestra (nine pieces plus conductor) that Barrington Stage has ever assembled in Pittsfield, and the truth is, the small pit won’t take any more. It was never meant for more than a vaudeville band. But the musicians sure made a glorious sound, a brilliant blend of strings, brass and other instruments that provided substantial heft and diversity for the ear. Music Director Darren Cohen had a perfect sense of balance between the voices and instruments, and Ed Chapman’s sound design – which included some hilarious corks popping in the wedding scene – made sure everyone could hear every word.

The scenic designer did well on the multi-purpose stage house and tailor shops, but the impressionistic (minimalist?) large drop pieces were undistinguished, and in one case looked unfinished. Anatevka is more suggested than realistic. The lighting by Jeff Davis was mostly unobtrusive, though once in a while had some hot spots – as in the family photo that begins this review – with too much contrast between Tevya and his family, a minor quibble at best.

It is a pleasure to see such an honest production of a classic tale, with deliberate craftsmanship as director Gary John La Rosa sought to reproduce the joys of the original show, including its stunning choreography. As a result, this Fiddler on the Roof is likely to go down as one of the classic productions at Barrington Stage Company. It is one big, winning musical, the first blockbuster hit of the summer.

Additional Events in Connection with Fiddler on the Roof

A Celebration of Yiddish Folkore & Music:
July 8. New Riffs on Everyone’s Favorite Yiddish Story with Aaron Lansky, Founder and President, Yiddish Book Center, Amherst, MA. Sunday at 3pm. Mainstage, 30 Union Street, Pittsfield. Fiddler on the Roof is warm, familiar and fun – but it’s a far cry from the stories by Sholom Aleichem on which it’s based. In this lively presentation Lansky will explore the deeper meaning of those rollicking and often profoundly unsettling tales. Free (reservations recommended).

July 9. Fiddler Off The Roof, A Klezmer Event with Golem and host Seth Rogovoy. Mainstage, 30 Union Street, Pittsfield. Monday at 7pm. Hailing from New York City, the acclaimed band Golem entertains with its brash, unique style of old-time klezmer, Yiddish theater music and Eastern European folk juiced with rock ‘n’ roll energy and a 21st century sensibility. Preceding the concert, host Seth Rogovoy puts the music of Fiddler on the Roof and Golem into context of hundreds of years of klezmer history in a multimedia program. This event is presented in coordination with the Yiddish Book Center’s YIDSTOCK: Festival of New Yiddish Music. Tickets: $30 and $25.