Burns and Murray review “Dr. Ruth, All the Way” at Barrington Stage Company 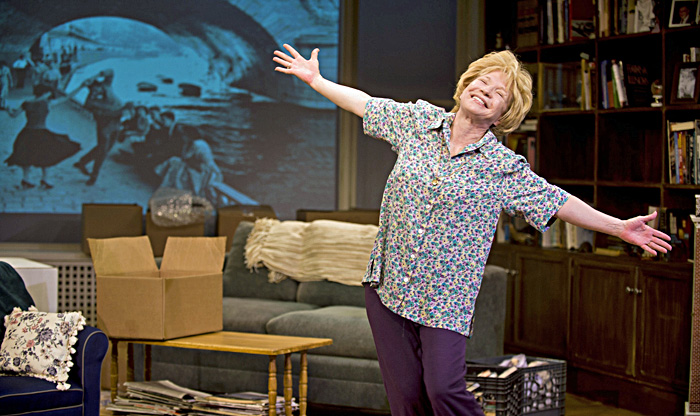 Burns and Murray review “Dr. Ruth, All the Way” at Barrington Stage Company

Burns and Murray review “Dr. Ruth, All the Way” at Barrington Stage Company
by Gail Burns and Larry Murray

Ed. Note: Dr. Ruth, All the Way returns for a second run at Barrington Stage September 19 to October 7, 2012. Read Update

Larry Murray: Throughout my life I have looked closely at successful people for a good role model to learn from. Dr. Ruth Westheimer may be it. The play that Mark St. Germain wrote about her received its world premiere last night at Barrington Stage Company. The playwright spent months with her and last night we joined her on her journey, in one of the finest stage productions I have seen in the past decade. Biography on stage doesn’t always work, but the gods were with us on this one. Did you have a similar reaction, that we were witnessing something not only original, but also transformative?

Gail Burns: Absolutely! This play, this production, this performance are inspiring and life-affirming, as well as being highly entertaining. And for me having Dr. Ruth herself so obviously and enthusiastically in the house enjoying the show made the play especially poignant to me. You cannot fool the person who lived this story and so I thoroughly believed that every word of what I was seeing was true in some way to Dr. Ruth, her personal ethos, and her story.

Larry: I find it difficult to put my finger on the key element that made this evening of theatre so rewarding. It comes down to whether it was the subject matter, Julianne Boy’s direction or Debra Jo Rupp’s portrayal, right down to that famous accent.

Gail: This is a production where all the pieces fall perfectly in place. One-person shows can become talking-heads, but there is never a dull moment as Boyd has Rupp flying all over Brian Prather’s wonderful set. Indeed I don’t believe Dr. Ruth is ever idle in real life! St. Germain employs the “audience as guests” technique, so Rupp is speaking directly to you, inviting you into the story.

Also Westheimer has allowed a remarkable number of personal effects to be incorporated into the set – actual photos of her and her family are projected onto the walls of the set as Rupp holds up the originals. At one point Rupp sings a duet with a projected video of Tom Chapin. This is one of the most flawlessly executed fusions of technology and live stage action that we have seen outside of a state-of-the-art facility like EMPAC, wouldn’t you agree, Larry?

Larry: Brian Prather did those projections as well, and yes, EMPAC (RPI’s Experimental Media Performing Arts Center in Troy, NY) has even more sophisticated equipment, but rarely used to such dramatic effect. The images and films blended naturally into the journey on stage. It’s wonderful to see state of the art technology used to further enhance such a dramatic life story.

Gail: It is easy to think of Dr. Ruth as one big sex joke – and she would be the first to laugh both at the word “big” (she is a TINY woman!) and at the sex joke – but even though I knew very little of her life story ahead of time, I knew it would be fascinating. You had the honor of meeting her and interviewing her Larry. (Read it Here) Tell me and our readers about that experience…

Larry: As you know Dr. Ruth found some time to talk to me, and to answer some questions about the show. She is as smitten with it, as I am with her. As a general rule critics are not supposed to become friendly with those involved with a performance, but I flaunt that rule, preferring instead the insights that getting up close and personal with the artists can provide.

Gail: Did you get any from her, or the play?

Larry: In person she is the perfect Jewish grandmother, all business, all smiles and when she turns the tables and asks you a question, it is impossible not to answer. On stage Rupp channels this favorite technique, pulling “a Westheimer maneuver.” But what I got from her was the assurance that what I would see on stage was real, that she told things to St. Germain that she had never told anyone else, and that this process required a level of trust that was as high as her confidence that it would turn out right in his hands.

So many of the things we both wanted to know about her were contained in this biographical play. Her real life story is stranger than fiction, don’t you think?

Gail: It is a remarkable story of courage, intelligence and endurance of the human spirit. Born in 1928 in Frankfurt, Westheimer escaped the Holocaust at age 10 through the sheer luck of being chosen as one of the 300 German-Jewish children accepted by Switzerland as part of the Kindertransport. The rest of her family presumably perished at Auschwitz.

From Switzerland she went to Palestine and then the newly formed nation of Israel where she served in the military as a sniper (she is still, at age 84, an excellent shot.) Marriage to her first husband took her to France, and her first divorce kept her there. A second marriage brought her to the United States where her first child was born, but a second divorce left her a struggling single-mother in New York City in the 1960’s.

Her very happy third marriage to Frank Westheimer, the birth of their son, and her hard-won doctoral degree in education (earned when she was 42) set the stage for the second half of her life, about which far more is known publicly.

Larry: One of the things I had always been curious about was how she developed such a sure sense of what is right and wrong in sexual matters. But that was the wrong question, since she is pretty nonjudgmental about sexual things, just a fountain of sound advice. Since it appears that a good portion of the people rely on their churches for sexual rules, and often see it conflated with visions of hell and torment if they get out of line, Dr. Ruth doesn’t buy into that school of thought.

Gail: As a devout Orthodox Jew, Dr. Ruth had it easy in terms of theological baggage. I am not Jewish and do not pretend to be an expert, but as I understand it Judaism does not attach the same concepts of sin and evil to human sexuality that Christianity has over the centuries. Judaism is all about family and home and you can’t have either without love and sex. Jews view sex as a God-given gift to be enjoyed with mutual love and respect in a committed relationship, which is exactly the philosophy that Dr. Ruth espouses.

I believe her main splits with Orthodox Jewish beliefs are her pro-life stance, which St. Germain states succinctly in the play, and her open attitude towards homosexuality. Because family is seen as the center of Jewish life, the inability of homosexual relationships to produce children makes them sinful in strict Orthodox teaching.

Larry: In fact, hers are nonjudgmental opinions, some of which we hear as the play begins, and as a coda in the second act as she begins her late career as a sex education expert on radio and tv.

I have long wondered about how Dr. Ruth developed her approach to talking about sex, it seems so natural and spontaneous. In the play she refers to the Talmud and how it “says that a husband owes his wife sexual satisfaction.” And of course she pursued studies in that area once she arrived in the USA.

During our interview, I asked her about this. She immediately replied: “The ability to talk so openly about sex is because in the Jewish tradition, sex has never been considered a sin, rather an obligation among married people. In that tradition it says that the husband should talk to her, so that she would be willing to have sex, and that is what I talk about for women to be given extra time to become sexually aroused, there is a recognition of the differences between us all sexually.” For those interested in these roots, she said, “I did a book called Sexuality in the Jewish tradition, with an orthodox writer, the editor of Jewish Weekly.”

Until Dr. Ruth, Americans pretty much allowed conservative religious movements not only to dictate the terms of conversation but also to change the nation’s laws and public health policies.

Gail: While both Judaism and sex are fascinating subjects, they are not what this play is about. It is about a woman’s life. In these dark days for American Women’s Rights, I think a story like Dr. Ruth’s – of one woman achieving her goals and making a difference – needs to be shouted from the rooftops. No one is going to silence her! I loved the moment late in the play when we see the photograph of Dr. Ruth’s four beautiful grandchildren and St. Germain had her say: This is Michal, Leora, Benjamin and Ari. My grandchildren. When I look at them, I know Hitler lost, and I won.”

And that is a statement about sex. Women are vessels of life. Genocide is about preventing a people from living, thriving, loving, reproducing. Dr. Ruth lived to do all of that and to teach others its importance in many, many ways.

Larry: Now with the play about her life, and the terrible setbacks she endured as a woman, an orphan and person without a country, people can see how she handled such contentious roadblocks, and prevailed.

Gail: St. Germain has perfectly captured Dr. Ruth’s whole being – her infectious joy, her deep sorrow, her intelligence, her dedication. This past winter, when I was thinking I would not be reviewing this summer, I tried to convince myself that there really wasn’t anything I wanted to see this season anyway. That lie fell apart every time I saw Debra Jo Rupp’s face smiling up at me from Barrington Stage publicity. I knew in my heart that this would be a very special experience, and I was right. I encourage all of our readers to go and share in Dr. Ruth’s story.

Dr.Ruth, All the Way runs from June 19-July 21 on the St. Germain Stage of Barrington Stage Company. For tickets call 413-236-8888 or click www.barringtonstageco.org Running time about two hours plus one intermission.