Burns and Cane Review “Legally Blonde” at the MacHaydn Theatre 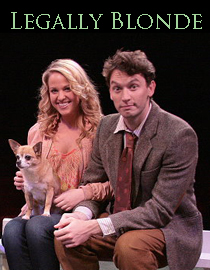 Burns and Cane Review “Legally Blonde” at the MacHaydn Theatre

Roseann Cane: I moved to Columbia County in 1998, and it did not take me long to learn that the Mac-Haydn Theatre is beloved here. Over the years I’ve heard so many warm reminiscences from folks who grew up in the area, folks who saw their first show there, and some whose only experience of live theater was in the audience at a Mac-Haydn production.

Gail Burns: Absolutely, I have had many wonderful experiences at the Mac-Haydn over the years. Their quirky, in-the-round performance space allows them to present theatre in an almost cinematic way, and there is no doubt that their big dance numbers are second to none. They have raised up and trained at least two generations of theatre artists. Its a marvelous place.

Roseann: And I was ready to have a good time. Maybe I didn’t have strong feelings about seeing Legally Blonde, but I was eager to experience this cherished theater. And I knew, or knew of, a few actors in the show. I’d been hearing great things about Monica Wemitt. And I knew that Eleah Jayne Peal, who I thought was just wonderful in Urinetown at the Ghent Playhouse last winter, was in the chorus.

Gail: I was ready to experience this 2007 Broadway vehicle which has recently been released for amateur and professional production and is being staged EVERYWHERE this year. I have never seen the film, which is typical of me, and hadn’t heard the score before, which is unusual.

Roseann: But, oh, my ears. As soon as the lights went down and the music erupted I realized I’d be uncomfortable for the duration of Legally Blonde. And when the lovely ladies of the chorus, mic’d to the nines, descended on the stage, I knew I was in trouble. I don’t care for mic’ing in the theater to begin with, but why, oh why, would any performer or musician need amplification in a theater as small as the Mac-Haydn?

Gail: Actually, Roseann, performers do need to be miked at the Mac because they are always facing away from three-quarters of the audience. If you aren’t familiar with the lyrics or plot of a show you really do need to see an actor’s face to understand what’s going on. But sadly at the performance we saw, which was the first public performance of this production, the sound system was malfunctioning miserably for the entire first act. It was painful. They fixed the problem during intermission and the difference was immediately apparent, but I felt like I only really heard half the show.

Roseann: Let me admit right off the bat that I have a problem with this trend of morphing movies into musicals. The U.S. has a sumptuous history of musical theater. Taking a film that did well at the box office is a shortcut to success, if you define success as making easy money, but it’s also a dismissal of creativity, new ideas, depth, and all the things that make the theater a transformative force. That said, I can understand from a business point of view why the Mac would produce Legally Blonde. Apparently, the show has enjoyed international success. I saw the movie Legally Blonde. I thought it was cute and entertaining, if not memorable. But what made the movie entertaining was that it was silly and funny, with an essential sweetness. It turned stereotypes inside-out.

Gail: I don’t have a problem with the concept of film-to-stage, but they have been way overdone in recent years and I am heartily sick of them.

Roseann: My complaint with this musical version is that the sweetness was missing, and, more importantly, the wink to the audience was completely absent. I think much of the fault lies in the script by Heather Hach. But director John Saunders could have mitigated some of the many problems by making different choices. For example, had the characters been played WAY over the top (think Charles Busch), we would have all been in on the secret. But the characters, especially the women, were stereotypes that struck me as demeaning rather than campy or satirical. I found the portrayals of women as shrill, vacuous Barbie dolls or love-starved losers or humorless bitches truly aggravating.

Gail: What I had heard about the film had prepared me for a story of how one young woman, who had always defined herself by her looks and relationships with men, came to understand herself more fully as a complete, independent, intelligent human being in spite of being blonde and preferring to dress head to toe in pink 24/7. Instead I got a story about how you can get into Harvard Law School by wiggling your butt in a skimpy costume. The whole thing just felt like a girlie show – all T&A and no substance. And the score by Laurence O’Keefe and Nell Benjamin was unmemorable.

Roseann: In the opening scenes, Leanne Smith presented a very low-key Elle who suddenly became a dunderhead when she showed up at Harvard Law School. If Elle’s persona is not established from the start, and we don’t believe that Elle’s decision to apply to Harvard is borne of naiveté, any surprise or joke is squandered.

Smith is a very pretty young woman, and physically she’s certainly right for the part, but I don’t think she’s yet developed the acting chops to present a fully-formed character. I’d hasten to add that Ms. Smith does not deserve all the blame here; this script would have been a challenge for even the most experienced actress.

Gail: I liked Smith much better once the problem with her mic was fixed and I could hear her! Its very hard to develop a character if no one can hear what you’re saying or singing about, even with a well-crafted libretto.

Roseann: The most sympathetic character in the show, tenderhearted hairdresser Paulette (played with warmth and effervescence by the fabulous Monica Wemitt), doesn’t find happiness until she learns to “Bend and Snap”—that is, to bend over and display her tush, then abruptly stand so her breasts bounce up. So I guess the message is that the only way to find happiness is to snag a man, and the only way to snag a man is to vigorously shake your T & A.

Gail: I don’t have words for how unspeakably heinous that message is, especially coming as late in the show as it does. At that point I had expected Elle to have discovered that she could succeed in other ways. And I fail to find any maneuver sexy that concludes with the woman tucking her elbows into her armpits like a demented T. Rex.

Roseann: Wemitt has a spectacular voice and a radiant presence, and I long to see her without a mic in a show worthy of her talent. Ditto Rob Richardson, who, as law professor Callahan, very nearly overcame the lousy script he had to work with. That’s the mark of a pro! Elyse Langley created a smartly drawn Vivienne, and Patrick Heffernan gave us a loveable Emmett.

Gail: I adore both Wemitt and Richardson and was heartbroken to see them struggling to sell such shoddy material. Heffernan had the only really three-dimensional and sympathetic role and I liked him immensely. Langley was saddled with such a dreadful character that I could barely appreciate her obvious gifts.

Roseann: Lauren French is clearly talented, and I hope to have a chance to see her perform in another show. I was so put off by the role of Enid as it was written, I think French’s hands were tied. Enid, a cerebral Harvard Law student, is a lesbian who loses 100 I.Q. points and salivates at the sight of a curvaceous woman. This brings me to another big problem I had with Legally Blonde—the show is permeated by an acrid scent of homophobia. The big courtroom number “Gay or European” took what could have been an amusing joke poking fun at the way we perceive other people and, instead, celebrated the skewed perception as reality.

Gail: I was literally aghast by that number and I struggle to put my finger on just why… poking fun at sterotypes is an excellent way to shatter them, but this bit missed the mark by a mile and just felt appallingly uncomfortable.

Roseann: Another missed opportunity? Travis Chinick’s costumes. Elle and her compatriots are from Malibu, so their clothing needs to look expensive. Tacky is not synonymous with cheap. What was up with that Professor Callahan’s big rhinestone tie tack? Callahan would be a conservatively elegant dresser, don’t you think?

Gail: The first thing I did when I opened by program was look to see who’d done the costumes, and when it wasn’t Jimm Halliday I was sad. Obviously I was ready to give Chinick a tumble, but he fell far short of my expectations.

Roseann: Choreographers Brian Murphy and Sara Sheperd, we are told, are “…veterans of more than a thousand performances of the first Broadway national tour of Legally Blonde.” My high expectations, unfortunately, were not met. For the most part, I felt that the ensemble dance numbers seemed crowded and chaotic, just not adapted to theater in the round from Jerry Mitchell’s original.

Gail: Here I disagree. I always enjoy the dancing at the Mac and I did in this show too. Because the Mac-Haydn company is invariably young, “Legally Blonde” is a great fit for them. Murphy and Sheperd have staged really athletic and exciting dance numbers. I was wowed by Brian Leggett’s tumbling runs.

I also really liked Kevin Gleason’s set and lighting for this show. Sets are problematic at the Mac-Haydn but the brilliantly white molding running around the top of the performance space gave the whole show s feeling of class and elegance that I enjoyed and that worked well as the action moved from a UCLA sorority house to Harvard Yard and then to the law courts.

Roseann: Because of the unfortunate stereotypes presented in Legally Blonde, I would not encourage our readers to bring their children. Actually, I noticed a good deal of yawning among the children who were in the audience when we attended, so maybe I’m being overly protective.

Gail: My first reaction was “What an awful message this show sends girls and young women!” Elle is not a teenager, she must be 21-23 when we first meet her in her senior year at UCLA, and 25-28 by the end of the show, but she dresses and behaves like an over-grown Disney princess, a trend I abhor. You don’t have to wear horn-rimmed glasses, a power suit, and sensible shoes to be a smart, strong woman. You are allowed to be YOU, and if you are girly and feminine and like to wear pink you still have every right to be taken seriously.

As I mentioned earlier, we did see the very first performance of this production. I hope that over the course of its three-week run at the Mac-Haydn that the technical glitches get ironed out and the cast coalesces to present a more even and focused show.