Burns and Murray Review “All My Sons” at Barrington Stage Company 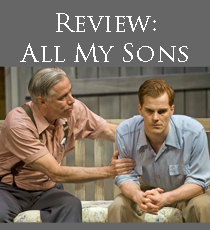 Burns and Murray Review “All My Sons” at Barrington Stage Company

Larry Murray: If we compiled a list of the one hundred essential plays everyone should see, wouldn’t you include All My Sons since it is, well, the most Arthur Miller-ish of his many Broadway successes which include The Crucible, Death of a Salesman, View from the Bridge and many others.

Gail Burns: I was warned before I went to see All My Sons for the first time many years ago, that it was a good play, but out of date. That advice was dead wrong. All My Sons is a perfect play, meticulously structured, and painfully timely in its message.

I actually like this the best of all the Miller plays I have seen and read. It was the tenth play he wrote and he had decided that if it was not a reasonable success he would give up playwriting and pursue a different dream. Luckily for the theatre world All My Sons was Miller’s first commercial success, winning Tonys for Miller as Best Script and the production for Best Play of 1947. Imagine, without it none of the plays you just named would have been written. American drama in the second half of the 20th century would have looked and sounded very different indeed.

Larry: I would also recommend this production at Barrington Stage Company since it is competent, respectful of the author’s intentions and as professional as you will get anywhere in the world. It has so many elements going for it, like family secrets, a disillusioned son, and most important, the sort of morality tale that Julianne Boyd, who directed, loves to bring to the stage.

Gail: Every time I see this play I find immediate correlations to current events. Now, seeing it immediately after the Colorado theatre shooting, I saw it as a play about how the immediate family and friends of a mass murderer try to cope and move on with their own lives. Whenever I see the face of a James Holmes or a Timothy McVey on my TV screen I turn to my sons and say “I never want to be THAT mother.” This is the story of that family, those neighbors, those victim’s families. How do you live when that face and name on the screen or in the paper is that of someone you love?

Larry: So if someone has never seen it, this is a no-fail choice for a fascinating theatre journey with a great playwright. But – and here’s the rub – if you have seen this play before, you will wonder what is new in this umpteenth production, and here the answer is not quite so upbeat.

Gail: I favorably reviewed productions of this show in rapid succession in 2009 and 2010 and both brought me new insights into the plot and characters. Here, although everything is very professional and competent, I did not experience any visceral connection. I never was able to suspend belief and forget that I was watching actors on a stage.

Larry: I found myself drawn into the story once again, which is as much a portrait of a society as it is of Joe Keller (Jeff McCarthy), the father figure around whom the story swirls. His moral abdication in selling defective parts that caused planes to fall out of air killing World War II American pilots and managing to put the blame on his partner echoes even today as profit is put ahead of people.

Gail: Miller actually began writing All My Sons in 1941, but I cannot imagine the plot working in a wartime setting. 1947 is perfectly situated close enough to the end of the hostilities for them to still be fresh in people’s minds, and just on the verge of the post-war Baby Boom affluence and McCarthyism of the 1950’s. Miller did not serve during World War II, but his contemporaries did and were part of what we now call “The Greatest Generation.” This play gives a fascinating look at those veterans as disillusioned young men struggling to reenter civilian life.

Larry: Actor Jeff McCarthy hides Joe’s guilt under the guise of normalcy. He’s everyone’s good-natured neighbor, making jokes, throwing mock punches, and in general playing the beaming patriarchal dad. I think McCarthy could have turned that bonhomie up a few degrees, the better to mask his dark secrets.

Gail: McCarthy in particular left me cold. I didn’t feel he conveyed Joe’s rising panic as he realizes what his wife Kate (Lizbeth Mackay) has known all along – that their surviving son’s decision to propose to his late brother’s fiancee, Ann Deever (Rebecca Brooksher) the girl next door, will bring their carefully constructed world of deceit and denial crashing down in on them.

Larry: I agree that McCarthy sometimes underplayed his role, and I felt him stressing out, subtly, not quite yet in a panic. Maybe it came through because I was on the other side of the theatre from you and he was facing me more directly. It was visible in his expression as he stood on the back porch in those moments when he realized that his partner’s son, George Deever (Matthew Carlson), was about to return knowing the truth and planned to tell his sister Ann. For some reason I chose those moments to keep a watchful eye on McCarthy, and so I read the alarm all over his face and in his body language during parts of the second act. One of the things

It’s an interesting phenomenon since you often see things I miss. Part of it has to be that in a theatre we each have a different view of the stage. And the other part depends on where we are focused. So we are probably both right.

Frequently I purposely glance at the other actor, not the one talking, to get a measure the depth of their abilities. At these times they should not be big expressions, but a furrowed brow, small short air intake, raised eyebrow is enough to indicate a response as the other actor is talking. It’s why I am constantly cleaning my glasses,and try to get seats as close to the stage as possible. For me, an actor who is still reacting when the focus is not on them is a pretty fine actor.

I was equally impressed by Lizbeth Mackay as Joe’s wife Kate hit her difficult notes just about perfectly, especially as her surviving son Chris (Josh Clayton) got a little too close to the fantasy she was clutching about his brother Larry, whose plane was reported missing over the Pacific but whose body was never found. But I think there could have been even more contrast between her neighborly cheerfulness and suburban charm and the cries of despair as she grasped the truth in the melodramatic letter produced by Chris’s fiancee, Ann. That wail should have been gut wrenching, not merely pitiful. It brought me close to tears – as it does every time I see All My Sons – but it has also been known to start them flowing, and that’s my measure of a performance. Close, but no tears.

Gail: Ann is cunningly written role, she is a strong woman who has carried an incredible secret in her heart. If you, like me, are very familiar with the play, watching the actress playing Ann react to her old friends and neighbors should be fun and enlightening as to what way the director is taking the production. Again, while Brooksher is a fine actress, she never involved me in Ann’s secret. There is a difference between not giving away the plot and being true to the character. Ann knows what she knows from the start, a good actor/director team should be able to make it visible from that first moment as well.

Larry: Arriving at the theatre I was struck by the angular beauty of the set, a diagonal fence separating the Kellers’ house from the others that receded down the block, the work of David M. Barber. His scenic work is becoming a bit of a signature to the productions Julianne Boyd directs.

Gail: I loved the way the Kellers’ house loomed over the stage and spilled outside of the frame of the proscenium arch. It was as if the secrets it contained were too big to be comprehended in one glance.

Larry: And while we are on production, Scott Pinkney’s lighting design was unobtrusive but set the time of day perfectly. I couldn’t help but notice how incredibly neatly all the various lighting instruments marched up the sides and over the proscenium, not two by two, but three by three. It’s unusual to mention, I know, but usually the lights are sort of thrown up and never recognized for indicating the attention to detail a company is paying to a production.

Julianne Boyd directed and her attention to detail was just breathtaking. With ten characters and lots of coming and going, she had to be a good traffic cop, and even the throw away lines when characters were arriving and going were delivered fully worked out.

Gail: The encroachment of neighbors and community on the Kellers’ world is an integral part of Miller’s play, which Barber’s set and Boyd’s direction capture perfectly. With each national tragedy – and Joe’s act of criminal negligence that cost the lives of 21 servicemen falls into that category – we say we will never forget but most of us do. It is up to those most intimately involved to continue to remember and speak out for those lost and wounded. Each of those windows are watching eyes holding Joe accountable in their gaze.

Larry: I can’t fault any of the acting or staging, but wonder if in all the detailing and crisp direction they didn’t sacrifice some of the more visceral acting elements that comes with actors truly inhabiting their roles. Every actor on that stage was good with superb moments, but the synchronicity you often get with ensemble work seemed to not have gelled yet. Do you know what I am getting at?

Gail: These wonderful productions we see in the summer are rehearsed and teched in a remarkably short period of time, and this one played just three or four preview performances before opening to the press. Productions do take time to gel, and this competent company may have been just a few performances shy of perfection when we saw them.

Larry: So what’s our recommendation? I say if they have not seen this play before, it is a must-see, sort of like one of the basic building blocks of theatre experience.

Gail: Absolutely! Everyone will come away with something meaningful for them in their lives. Just because we have been blessed to see more satisfying productions over the course of our careers doesn’t mean this one isn’t going to just blow the socks off of someone else. All My Sons has so much to say that is relevant right here and now that you owe it to yourself to make an effort to see it.