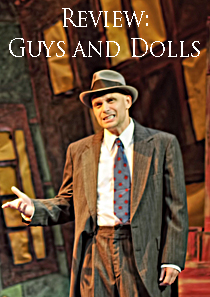 Review: Guys and Dolls at the Cohoes (NY) Music Hall
by Gail Burns and Larry Murray

Larry Murray: Guys and Dolls has opened the tenth season for C-R Productions at the Cohoes Music Hall, it’s a wonderful show, and it’s arguably the best musical ever written. The colorful characters, the hummable music, the bright costumes, they’re all theatrical heaven.

Gail Burns: C-R Productions’ Artistic Director Jim Charles says its one of his favorite musicals and he is not alone. Frank Loesser (1910-1969), who wrote the music and lyrics, was already established as a successful tunesmith on Tin Pan Alley and in Hollywood before trying his hand on Broadway with a musical adapation of Charley’s Aunt in 1948. Guys and Dolls (1950), based on a couple of Damon Runyon’s Broadway short stories, was his second Broadway show and won him his first two Tonys. He also penned the magificent but seldom performed Most Happy Fella (1956) and the less successful Greenwillow (1960), before winning two more Tonys and the Pulitzer for How to Succeed in Business Without Really Trying (1961) (Abe Burrows and Jo Swerling’s book for Guys and Dolls would have won the Pulitzer Prize for Drama had Burrows not been in trouble with the House Un-American Activities Committee.)

Larry: It seems like just yesterday (2011 actually) we had the pleasure of its acquaintance at Barrington Stage Company in another brilliant production. What do you think the difference is between them? (Link to Gail’s review)

Gail: I loved the BSC production last year. They are a larger, bigger budgeted company performing on much larger stage, so in a way it is comparing apples and oranges, but Guys and Dolls can be wonderful on a large or small scale. LoriAnn Freda’s Miss Adelaide was every bit the equal to Leslie Kritzer’s boffo performance, and I liked Paul C. Kelly as Nathan Detroit much better than Michael Thomas Holmes at BSC. But the best part of any C-R Productions show is getting to hear the score unmiked. And Cohoes always has a decent sized pit orchestra, while BSC has sometimes mounted musicals with two pianos.

Larry: Given the joy this musical brings, we can’t discuss this production without bringing up what has to be on the mind of everyone who loves this company, the uncertainty of its future. Looking at the cast, the sets and the overall production values, you would never know that this is a company in financial peril.

Jim Charles, who along with Tony Rivera started the company a decade ago, had a brief heart to heart talk with the audience after intermission in which he explained the $75,000 deficit they are facing, a combination of a drop in corporate funding, reduced subscription renewals and a long run of the musical Hair which lost tons of money because it didn’t sell enough tickets.

So this Guys and Dolls is a bit of a roll of the dice for them, and should help reverse that run of bad luck they have had.

Gail:I have been a HUGE fan of C-R Productions right from the start. A successful theatre company these days needs to connect strongly to its community, and C-R Productions has done just that with a terrific youth theatre program, C-R Kids, C-R Center Stars for people with disabilities and C-R Generations, which links youth with senior citizens in the area. Cohoes is Charles’ hometown and he and Rivera, who are a couple and new dads to boot, have put their hearts and souls into this company and the Music Hall always feels like a happy, homey place.

Community connections do help sell tickets but so do great productions and C-R Productions has had many more hits than misses over the many years I have been covering them. Broadway quality shows for $30-35 a ticket?? Come on, Capital Region, get behind this company and this historic theatre and keep them afloat!

Larry: Getting Back to the production, I knew this was going to be a winner from the moment Nicely Nicely (Bryan Robinson), Benny Southstreet (Mark Burgasser) and Rusty Charlie (Jean Bonavita) opened with the “Fugue for Tinhorns.” It has to be one of the most intricate show tunes ever written, not to mention those great lyrics: “I’ve got the horse right here, his name is Paul Revere…”

Gail: I was hooked even earlier, with the opening of “Runyonland” – Rivera, who directed, and choreographer Christopher George Patterson had the large cast of two dozen players racing all over the place. As I said at the outset, the stage in the Music Hall is not large, but you forget that completely during the big dance numbers. Such energy!

Larry: What always impresses me about C-R Productions is how they successfully mix Equity actors with some of the Capital region’s best resident actors. As Nathan, Kelly was at the top of his game, and I just fell in love with the whacky characterization Freda created for Miss Adelaide. Exceptional also was Joshua Phan-Gruber as Sky Masterson, and that trio was so outstanding that Christina King had the tough role as Sarah Brown, the prim and proper Salvation Army lady. You are far more familiar with many of the cast members, how did they strike you?

Gail: I loved the whole cast. King had a few weak moments, especially early on, but she grew into the role and into my heart. I hadn’t seen Burgasser before, although he has performed a lot on local stages, and now he’s a new favorite (loved his lime green socks!) Robinson, with lots of help from the rest of the cast and Patterson’s great choreography, really knocked it out of the park on my favorite song, “Sit Down, You’re Rockin’ the Boat.” And its always great to see local stalwarts like Sky Vogel (Harry the Horse), Carol Charniga (General Cartwright), William Sanderson (Arvide Abernathy), and Patrick White (Lieutenant Branigan)

Larry:The pit band was six strong and had a great sound, though that trumpet still has serious problems with softer passages, I guess brass instruments were never meant to be played quietly. Music director Joe Schermann had a good ear for finding the balance between his players and the singers. They never drowned out the vocals, unless the vocalist wasn’t delivering.

Gail: As I was waiting for the elevator after the show I overheard Schermann giving notes to some of his musicians. These folks are serious about their sound.

Larry: And finally we come to the sets, costumes, lighting. I thought the overall design of the stage was a mixture of styles, but felt mostly art deco which turned out to be perfect for the period.

Gail: There are a lot of set changes in this show, and many of the sets descended from the flies and almost all had momentary hang-ups, which I have seen happen before at Cohoes. And while Renee Butcher’s lighting design is fine, whoever is running that follow spot needs a serious dressing down. The light was always late and unfocused and during “More I Cannot Give You” the spot was on Sarah instead of Arvide, who was actually singing, for almost a minute!

But Christina Williams’ sets look fine and allow plenty of room for the dancing. I especially liked the mission and sewer sets. And Karin Mason’s costumes are fun and move well. The break-away dresses for “Take Back Your Mink” are wonderful! The audience literally gasped when they came off, and then enjoyed the sexy black lingerie-look ensembles underneath. The four Hot Box Girls – Melissa Basolo, Rachel Broadwell, Rebecca Kostell, and Maiza Ornelaz – really rocked that number!

Larry: To sum up, nobody in the Albany area does musicals as often, or as professionally as the great team at the Cohoes Music Hall. And this Guys and Dolls is absolutely hitting a home run every night. Here’s two “thumbs up” for our readers, right Gail?

Gail: Oh yes! This is a fun production of a great show. And if you don’t support your local theatre by buying tickets and giving as generously as you can of your time, talent, and treasure, they may not be there for you, your kids, disabled folks, and seniors tomorrow.

Guys and Dolls is a terrific family show, and with a new school year looming, think about taking the kids with you as a late summer treat, before homework and school night curfews get in the way.

Larry: And if any of our readers would like more information on how they can help the company financially, Jim Charles can be reached at 518-237-5858, Ext. 3 or at jcharles@cohoesmusichall.com.

Cohoes Music Hall and C-R Productions present Guys and Dolls, Book by Jo Swerling and Abe Burrows, Music and Lyrics by Frank Loesser, Based on The idyll of Sarah Brown and characters by Damon Runyan. August 2-12, 2012. About two and a half hours with one intermission. www.cohoesmusichall.com, Cohoes, NY, Box Office 518-237-5858.