Burns and Cane Review: “A Funny Thing Happened on the Way to the Forum” at the Theater Barn 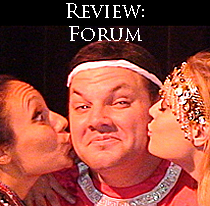 Burns and Cane Review: “A Funny Thing Happened on the Way to the Forum” at the Theater Barn

by Gail Burns and Roseann Cane

Roseann Cane: A Funny Thing Happened on the Way to the Forum first opened on Broadway in 1962 and has enjoyed many incarnations, including two revivals on Broadway (one in the ’70s and one in the ’90s), over the last half-century. I would have loved to see the Cantonese version produced in Hong Kong just a few years ago! It’s easy to understand its popularity. Smart, bawdy, upbeat…what’s not to love? And the show has a solid pedigree, thanks not only to its esteemed creators, but because it’s based upon the works of the Roman playwright Plautus, and celebrates his stock characters—the cunning slave, the dirty old man, the braggart warrior—as well as his joyful vulgarity.

Gail Burns: When I told a friend I would be seeing/reviewing ……Forum I was asked if I wasn’t heartily sick of it, and I answered no, for all the reasons you have outlined above. I have seen many productions, but three stand out in my mind as really special: the all-male version at the Williamstown Theatre Festival in 2010, starring Christopher Fitzgerald; the 2007 production starring Jim Charles at the Cohoes Music Hall; and the 2002 production at the Theater Barn starring Matthew Daly and Anthony Devine. So I was obviously very excited to see what the Barn would do with this show in 2012.

But I have to say that I was disappointed from the moment I entered the theatre. I remembered Abe Phelps wonderfully colorful set from 2002, and this time he produced nothing but grey monoliths.

Roseann: Now, as you know, Gail, I’ve recused myself from reviewing a number of plays this season, because I have a personal policy not to review my friends. I suppose it was inevitable that the fates would conspire to place me and my notebook on the wayward path of writing about a big musical like …Forum in which, unbeknownst to me until opening night, two friends of mine, John Trainor and Amy Fiebke, were cast. So I shan’t say a word about them.

Roseann: I had fun at The Theater Barn’s production, although I didn’t find it entirely satisfying, perhaps because Trey Compton’s direction seemed uneven. His choreography wowed me—it was ebullient, saucy, and inventive, and expertly realized by the dancers. Otherwise, there were some directorial missteps. The Proteans (Ben Katagiri, John Cardenas, and Jed Krivisky, who play a variety of roles) came off as too studied, acting stupid where they should have been being wacky. I longed for less self-consciousness and more slapstick, and my impression was that Compton need to take more time with these actors. I do understand that this may be too much to expect of a director of summer stock, where rehearsal time is severely limited.

Gail: The stage at the Theater Barn is very small and Phelps’ set was fairly large. Compton did a great job of moving a LOT of people around in an efficient and entertaining manner. It is a stage that he is familiar with as a performer and a director. But I agree with you that the overall feel of the production was uneven.

Roseann: I think the whole show would have benefited from more spontaneity and inventiveness. Enough with the rubber chickens, already. They just aren’t funny the third or fourth time they’re thrown onto the stage.

Roseann: As the smart-ass slave, Pseudolus, the glue that holds the show together, I found Robby May terrifically entertaining. He has a great belting voice to boot. I hope he gets progressively wilder during the show’s run.

Gail: I was disappointed in May. The three previous productions I mentioned each starred a great clown. Fitzgerald, Charles and Daly were entrancing, and each made Pseudolus his own. Sadly, May is not a clown. He is a solid musical comedy leading man, but that is not enough. Where are the clowns? Send in the clowns!

Roseann: But what happens in the moment, or seems to, is another story. While it’s normally an unforgivable breach for an actor to lose focus and react out of character, the rule doesn’t apply to …Forum. In the Roman theater, the actors looked right into the faces of the nearby audience, and addressed them directly. The audience expected and loved this interaction. Especially when you consider the Roman fondness for obscenity, it must have been wildly raucous. I’m so glad we had a taste of this spirit when, last night, Pseudolus and Hysterium (Mikey LoBalsamo) lost it during a key cross-dressing scene.

Gail: That was the best part of the whole show, and I agree with you that there should have been more moments like that when the actors let loose. I must remind our readers however that the Barn opens shows cold, with no previews. We saw the very first public performance. Hopefully things will speed up, tighten up, and loosen up later in the run.

Roseann: Joe Phillips had some good moments as Senex (the dirty old man), but I didn’t perceive any real distaste for his wife, Domina (Fiebke), let alone revulsion, and that’s essential for his role to work.

Gail: I thought both Phillips and Fiebke were miscast. That seemed to be the theme for this production – talented actors in the wrong roles! After his stand-out performance in The Great American Trailer Park Musical I was really excited to see Shaun Rice, cast here as Marcus Lycus, as Pseudolus. I think May would have been better as Senex or Lycus, or maybe even Hysterium. Fiebke may be over 30 but she is a beautiful woman – slap a blonde wig on her and she could easily play Philia.

Roseann: Jordan Wolfe, as Hero, and Maggie Carr, as Philia, were winsome and amusingly goofy as the young couple in love.

Gail: I absolutely agree. Those two were perfectly cast and just delightful.

Roseann: I thought that Rice, who won me over too in The Great American Trailer Park Musical, was well cast as brothel boss Lycus. I also liked his naughty, luscious courtesans, the Gemini twins (Caitlin Lester-Sams and Mary Kate Morrissey), Vibrata (Halley Cianfarini), Panacea (Ruth Kennedy), and Gymnasia (Katie Clark).

Gail: The running gag Compton and Clark came up with to have her character completely bored by the whole thing worked really well and made me laugh, but occasionally I found myself watching Clark’s antics when my attention should have been elsewhere. The timing and balance were slightly off.

But May let me down again in the scene where he is checking out each of Lycus’ courtesans – there was no lust, no leering, no eyeballs popping out of his head like a Looney Tunes character, nothing.

Roseann: Nick Miller was appropriately hunky as the bloviating braggart warrior Miles Gloriosus, but I wish that he, too, had pushed it over the top.

Gail: I thought that Miller, who has really impressive biceps, by the way, was closer to the over-the-top spirit of the show than many of the other actors. In some ways I felt like he had stumbled in from another, better, production of …Forum in a parallel universe.

And continuing my list of things that were disappointing, Alyssa Couterier’s costumes were drab and some of them quite ill-fitting. Draping gentlemen in white fabric togas and then allowing them to wear dark boxer shorts underneath is cheap and sloppy. Again, Couterier did a bang-up job just two weeks back on The Great American Trailer Park Musical. What happened?

Roseann: While this is not the best production of …Forum I’ve seen, it is a very enjoyable evening of summer stock.

Gail: It is enjoyable enough. But since I know what was and what could have been on that stage I was deeply disappointed. Daly has continued appearing at the Barn in the intervening decade, in fact he was there last summer, and I had really, really hoped this production would star him with Compton as Hysterium – they have made a GREAT comedy team in Barn productions of Dirty Rotten Scoundrels and Stones in His Pockets – with Compton’s wife Lara Hayhurst as Philia. I wanted Abe Phelps to build another happy, colorful set. I wanted Allen Phelps to be cavorting about as Lycus the way he did it ten years ago. Compton, Hayhurst, Phelps, Phelps, and Bert Bernardi, who directed in 2002, were all in the house. I just wanted to grab them all and say “Make it wonderful!” Sigh…

The Theater Barn presents A Funny Thing Happened on the Way to the Forum with Book by Burt Shevelove and Larry Gelbart,, Music and Lyrics by Stephen Sondheim, Directed and Choreographed by Trey Compton at the Theater Barn, New Lebanon, New York from August 23 to September 2, 2012. Box Office call (518) 794-8989.