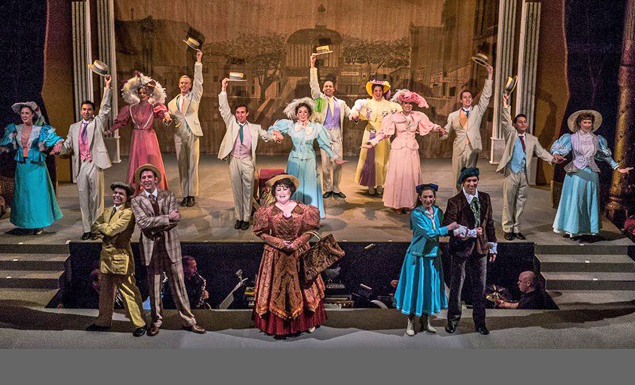 Monica M. Wemitt was born to play Dolly Gallagher Levi, which is why, after two monthes of pain and parsimony, I climbed in the car and drove over the Taconics to see her do it at the Cohoes Music Hall. I had seen her in 2009 at the Mac-Haydn and had exceedingly happy memories of her eating that chicken at the Harmonia Gardens.

Wemitt had understudied Carol Channing in this role in the 1995 production of “Hello, Dolly!” Channing is notorious for never missing a performance, although I believe Wemitt did get to go on for her once. But how terrifying is going on to house full of people who have paid to see Carol Channing? Yikes! But here everyone had paid to see Monica M. Wemitt and they were not disappointed.

I joked beforehand that I wasn’t excited about seeing “Hello, Dolly!” but about seeing Wemitt. My mind had lumped “…Dolly!” in with a bunch of other “classic” American musicals which were beloved for an iconic performance rather than for any merit of the script or score itself – “Funny Girl” springs immediately to mind – but I was very, very wrong. “…Dolly!” is a well structured show with a panoply of appealing characters and lovely melodies.

The original source material for “Hello, Dolly!” was a one-act farce entitled “A Day Well Spent” written in 1835 by British playwright and drama critic John Oxenford. It was turned in to a full-length play “Einen Jux will er sich machen” (“He Will Go on a Spree”) in 1842 by Austrian playwright Johann Nestroy. Nearly a century later Thornton Wilder created an American version entitled “The Merchant of Yonkers” which ran for a thuddingly disastrous 39 performances on Broadway.
Notice what all those early incarnations have in common? No Dolly.

It wasn’t until Wilder reworked the material and moved the formerly minor character of a widowed Yonkers matchmaker front and center, that a successful play, “The Matchmaker” (1955), was produced. All Dolly wanted was to be the center of attention. That’s why she gets the exclamation point after her name in the title of this 1964 musical with a Jerry Herman score and a libretto by Michael Stewart.

After watching Edward Albee’s George and Martha duke it out in “Who’s Afraid of Virginia Woolf?” what could be more soothing and regenerative than “Hello, Dolly!” where a whole slew of well matched couples come together over the course of the show? Dolly and Horace (Mark A. Burgasser), lonely, middle-aged and widowed, are meant for each other. The charming romance of the equally lonely 30-somethings Cornelius (Peyton Thomas Tucker) and Irene (Sarah Franz), the star-crossed plight of the tear-sodden Ermengarde (Molly Martinez) and her artistic Ambrose (Sean Zia), and the easy mating of the young and giddy Barnaby (John Cardenas) and Minnie Fay (Jen Morris), are each entertaining and heartwarming.

Choreographer Michele Tibbits worked with Wemitt on that 1995 tour and here she has recreated Gower Champion’s original choreography, which is fascinating in its restraint and period detail – the period in question being the “Gay Nineties” aka the last decade of the 19th century. Particularly for the women this means none of the athletic and provocative dance moves that we are accustomed to. The men get to cut loose in the Waiters’ Gallop, but the female characters, with exception of Andrea Christensen’s hoochie-coochie dancing Ernestina Money, keep their ankles demurely covered at all times.

Director Jim Charles and scenic designer David S. Goldstein have made sure to feature the 19th century splendor of the Cohoes Music Hall (built 1874) right up there with Jimm Halliday’s beautiful costumes. It is always wonderful to see shows that actually could have played on the Music Hall stage a century or so earlier up on the boards. Although neither of the 19th century versions of “…Dolly!” would have likely been staged, the house is right for this mid-20th century incarnation.

Most of the costumes featured were designed for the 2009 Mac-Haydn production, although I recognize some from other productions at that theatre as well, but certainly Wemitt’s drop-dead gorgeous ensembles were all made just for her Dolly. Sadly, while she looks fabulous in them, she also seems physically restrained by them. This is unusual for Halliday, who is known for costumes that move beautifully with the wearer and allow movement. Perhaps Wemitt is struggling with another issue that restains her movement, in which case she has my full sympathies, but the effect was of her being very tightly corseted into her clothing and preventing her from being her most brilliant.

But nothing can stop her megawatt smile! Wemitt lights up the stage whenever she lets it loose. She is also an excellent comedienne – she did not disappoint me in that chicken-eating scene – although she is at her very best when in close contact with the audience, as she is at the Mac-Haydn.

Irene Molloy is very much the tragic character plopped down in the middle of this farce, but Franz brought her to life tenderly with her gentle beauty and soaring soprano. I remember as a child listening to “Hello, Dolly!” on a Sunday afternoon radio show that played entire original cast albums in sequence, and being puzzled by this one song in a minor key: “Ribbons Down My Back.” Franz helped me understand it, and Irene, in a whole new light.

I didn’t feel enough tension between Burgasser and Wemitt to make their romance work for me. Was I asleep at the switch, or did Horace never call Dolly “A Damned Exasperating Woman” in this production?? If he did, it must have passed me right by for I never felt Burgasser’s exasperation. Tucker and Cardenas made a fine comedy team and were by far the best dancers among the speaking characters – as always, C-R Productions has rounded up a fine corps of dancers for the ensemble. Martinez’ Ermengarde grew on me, but I never did cotton to Morris’s Minnie Fay. She just rang false to me from start to finish.

The Hall was quite full for the Saturday matinee I attended, and I had fun chatting with some older audience members as we waited for the elevator after the performance. Among those in attendance some had seen Channing or Ethel Merman on Broadway, or Mary Martin on tour, but one gentleman had seen Pearl Bailey in the title role. I recalled how downright scandalous it had been to present the show with an all-black cast back in the mid-1960s and that “…Dolly!” was the first musical to attempt such a color shift. It was scandalous not only because black performers were playing white characters – an idea that didn’t sit well with extremists of either race – but because the world wasn’t yet ready for the notion of color-blind casting that Joseph Papp was just beginning to pioneer then. You could have an all-white cast or an all-black cast, but you couldn’t yet portray a racially blended world.

In another couple of decades there will be older ladies and gentlemen leaving productions of “Hello, Dolly!” and fondly recalling the time they saw Monica Wemitt in the role. Why not add this experience to your theatrical memory book?