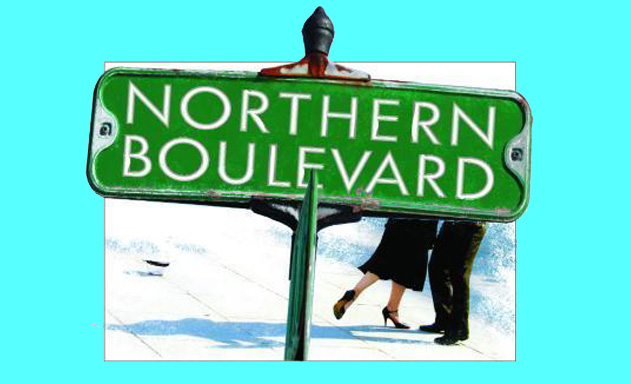 Larry Murray: It was a special night for Bennington, Vermont, with the opening of a brand new theatre by the Oldcastle Theatre Company and the premiere performance of Northern Boulevard, an impressive new musical by Bennington composer Carleton Carpenter, all watched over by a full house of residents, supporters and friends.

Gail Burns: From the opening comments by Eric Peterson, it seems to be a million dollar addition to downtown Bennington – neither of the company’s previous homes have been downtown. If the community embraces this new location, it could have the same sort of impact on Bennington that the Barrington Stage Company and the newly reburbished Colonial Theatre has had on Pittsfield.

Larry: I think the new facility is both efficient and flexible, design wise, being a large black box with movable seating modules, which are both nicely raked seating for great sight lines and quite comfortable. I didn’t think about my bum for 2.5 hours, which is not always the case in even the newest theaters.

Gail: I was slightly disapointed to see another long, rectangular theatre, reminiscent of the Elayne P. Bernstein Theatre at Shakespeare and Company, but then I realized that the seating is moveable and the design for this particular show was dictacted by Carl Sprague’s really handsome set.

Larry: The look of the set with its chrome stools reminded me of Bennington’s famous Blue Benn when it was new.

Gail: Yes, Jerry’s Deli was shaped like a diner, typically long and rectangular, after all, having had their start as railroad cars.

A quick thing we should mention about the house, one that I am now particularly aware of, is that it isn’t yet wheelchair accessible. If you can climb a few stairs – there are about eight of them up from street level to the theatre – then you are fine, but if you can’t walk and/or do stairs then you will have to skip this production. Oldcastle will be fully ADA compliant when they give this building its Grand Opening in March for Around The World in 80 Days.

Larry: They still have another $200,000 to raise for their own lighting system and to upgrade the roof and insulation. The urgent appeal of fundraising often becomes tougher once a place opens because people think the job is finished.

Gail: It was probably a blessing in disguise when the 40 year old company was asked to leave the Bennington Center for the Arts. It has enabled them to secure their future in their own home. They’ve done wonders to the old Knights of Columbus building at 331 Main Street, and have worked out a wonderful arrangement with Greenberg’s for parking. The Greenbergs were also instrumental in getting the Lazarus theatre company – as somebody called it – back up and running again. Building aside, Larry, how did you like the new musical?

Larry: The show was not cutting edge as far as musicals go, but rather had the temperament of a near and dear old friend who constantly surprises and delights. That’s because Carleton Carpenter wrote the music, and the opening of the theatre was also a bit of a tribute to this Bennington born and bred talent. Over the years he has acted in films, on stage and television, plus worked as a magician, author and songwriter. From Bennington High School to the present day he has been loyal to Bennington, and has been active over the years in the LGBT community as well. He appeared in The Boys in the Band which was a groundbreaking play.

Working with book writer Kevin Brofsky, the musical takes us to Northern Boulevard in Queens, New York, where Jerry and Roslyn SImon (Gil Brady and Cotton Wright) open a deli which survives wars, civil unrest, blackouts, not so secret affairs, and the ups and downs of restaurant life. The musical enables us to follow the delicatessan’s history from the day they first rent it to the day they lock the door.

Setting a show in a deli is really a great vehicle for having a parade of interesting people stream across the stage.

Gail: Back in 2007 I saw a very different musical with a very similar premise at the now defunct New York State Theatre Institute (NYSTI). It was called American Soup (Gail’s Review) and it chronicled 50 years of American history through the lives of an Italian-American family who ran a restaurant in Queens. Northern Boulevard is somewhat different – it covers 40 years and the family is Jewish.

Because NYSTI had an internship program through the Sage Colleges, they could literally send a historical parade of people across the stage. Oldcastle is an Equity house, so every actor is expensive. With a cast of only seven, some of whom play double or even quadruple roles, there was not enough people-power on stage to create a true panoply.

American Soup also matched the musical style in each scene to the era in which it was set, which Carpenter didn’t attempt. Carpenter was clearly more interested in his characters, for whom he has written charming songs, while Brofsky was more focused on the historical aspects of the story. But in the end I found both the historicity and story-telling-through-character to be weak in Brofsy’s book. There was obviously no budget for costumes, make-up and wigs which would have identified the era, so here we just had brief snippets of radio broadcasts at the opening of each scene to help explain what year it was, and even those were often unclear to me. When the heck did Hurricane Hazel hit? What year was it that Anwar Sadat was assassinated? I needed more robust clues. (Ed.Note, Google says Hurricane Hazel was 1954, Anwar Sadat’s assassination 1981)

Larry: I loved two of the characters. The first was Cheryl Howard who played a variety of colorful roles as the deli’s neighbor(s) over the years. She was, alternately, Jewish, Irish, Hispanic and African American, each with a change of dress, wig and bearing. She conveyed them very effectively, and passionately. In a duet with the incredible Richard Howe, who played Saul Gelbart, the pair knocked the roof off the new theatre, and when they left the stage I would have bet my bagel (as one of the song lines said) they would do an encore. I was greatly disappointed that it did not happen, but as the show moved forward it did indeed swing back to that number for the two to have another go at it. Of course it was the traditional “show stopper” and it brought the audience to its most ecstatic applause of the evening.

But there was another song that touched you deeply, what was it?

Gail: Well anytime Richard Howe is on the stage I am happy, and I agree with you that he was particularly charming here. His Act II duet with his grandson, Michael (Patrick Thomas Spencer) was another delighful and funny number, but I found myself really touched by  Brady’s solo after his son’s death, and also by the little anniversary song that Michael wrote for his parents – A Silvery Sort of a Song.

Larry: I liked Brady as Jerry, his character went from eager new business owner to retiree, and in between he was a WWII veteran, a father, then grandfather, and endured the seven stages of marriage to Roslyn (Cotton Wright).  His acting was perhaps a bit too subtle for my taste, I think he could have taken more risks, painted a broader difference in the characters of the young Jerry, the cheating Jerry, the long suffering Jerry, and the reconciled to retirement Jerry. His hair might have gotten grayer, his posture might have slumped a bit as he aged, and his voice could mellow from the young clear one to a deeper, more timeworn one as he packed up for Florida.

Cotton Wright is a David Mamet style actor – the playwright says all a good one needs to do is to “just deliver the lines” and forget all the fancy stuff. Wright’s plain vanilla role as Jerry’s boring wife left me cold, and that was likely her intent, for Jerry did indeed wander off, and referenced her life in the suburbs as one of PTA’s, garden clubs and the usual innocuous and safe activities that pass for a real life.

Gail: I was thoroughly disappointed in Brofsy’s writing of the character of Roslyn and by Wright’s non-performance in the role. A lot happened to American women between the 1930s and the 1970s. The most exciting thing that happened to Roslyn was that she stopped wearing an endless parade of tweed pencil skirts (which are terrible for dancing in) and put on a pair of black slacks. Whoop dee do!

Jessica Raaum, as “the other woman” Dorothy “Dottie” Fisher, was far more talented and far more interesting and got MUCH better costumes to wear from designer Deborah Peterson. She got a couple of knock-out numbers, notably the title song which is still stuck in my head, but again Brofsky did little with her character. Here was a woman who chose not to marry or have children and who carved out a successful career for herself and at the end of the show she was still pining for her high school sweetheart, Jerry. Sheesh!

Larry: Holding all this together was the musical accompaniment of piano and drums under the direction of Jeffrey Buchsbaum who I assume was playing the upright. I couldn’t find a credit for the drummer in the program – nor a song list for that matter – so rather than flail about on these elements, let us say Oldcastle needs to add a decent piano to their want list. The instrument either didn’t hold its original tuning or the damp weather had addled its strings, it was the sort of tinny, battered piano too many tone-deaf theatre companies end up using, not realizing how immeasurably the presence of a bright, perfectly tuned piano can add to a musical production. Did you come away with any quibbles, or am I just being picky and persnickety?

Gail: Well I was excited that it WAS a piano and not a synthesizer. I thought that single instrument, with the percussion, was just right for Carpenter’s nostalgic music.

Larry: The natural voices, without amplification were a treat, I wish more theatre companies would go back to trusting the singers to project.

Gail: My quibbles were primarily with Brofsy’s book, and I wonder what handing this premise and these songs to another librettist might do. There is a lot to like about this show, but the book tries to tell too many stories and ends up failing to tell any of them adequately.

Larry: There is so much about Bennington that is a magnet for me, and the rebirth of Oldcastle is just one more feather in the cap of that community. Let’s hope everyone in the Bennington region makes the trek to see this wonderful new theatre and musical.