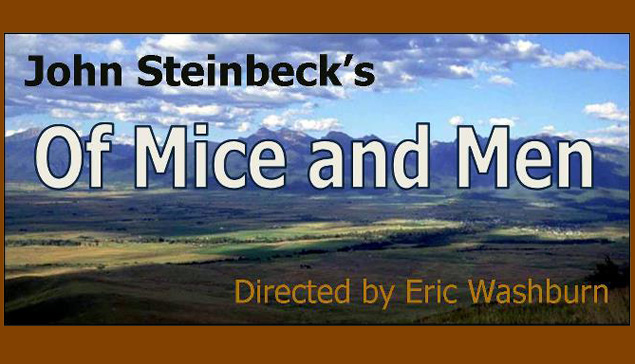 Review: Circle Theatre Players “Of Mice and Men” at Sand Lake Center for the Arts

by Gail Burns and Larry Murray

Larry Murray: During the great depression of the 1930’s the migrant workers weren’t from Mexico, they were your neighbors, often displaced by the collapsed American economy and without a home to call their own. John Steinbeck wrote a novel about this, an unblinking view of both the society that existed at the time, and contrasted its optimistic humanity with the prejudices that was America at that time – racism, sexism and the difficulty people with disabilities faced, often with little sympathy from others. It’s a tough play, but a fair accounting of that era.

Gail Burns: The major “safety nets” for many disabled and elderly then were friends and family. Lennie Small, who is mentally disabled, has no family. He is extraordinarily lucky to have his friend George Milton. But while George is mentally much more capable, he needs Lennie to justify his existence as much as Lennie needs him for the basics of life. Lennie gives George a purpose for being, a fact that makes the ending twice as tragic.

Larry: Against the background of this unlikely friendship between two migrant workers, Lennie and George encounter other bindlestiffs in much the same situation. That word really describes their world.

Gail: The word bindlestiff refers to both the iconic bundle in a kerchief tied to end of a stick and the hoboes who carry them. It was a lonely life on the road and few men teamed up as George and Lennie do. But it was equally lonely for many on who stayed put as well. The western United States was lightly populated and there was no highway system connecting communities.

Larry: It was Route 66 or rutted roads back then.

Gail: On the ranch near Soledad, California, where George and Lennie arrive to work at the start of the play, several of the residents are isolated. Elderly Candy (Dick Griffin) lost a hand in an accident and he knows that he’ll be “on the state” as soon as he’s unable to work. Crooks (Al Boyd), the black stable hand, suffered a back injury. That and his race serve to isolate him from the other men. Curley (Scott Luscier), the boss’s son, isolates himself with his anger and aggression. And the poor teenager he’s recently married, referred to by Steinbeck only as Curley’s Wife (Jill Wanderman), is completely alone as the only woman on the ranch. Many of them latch on eagerly to George and Lennie’s dream of buying their own farm and “living off the fat of the land.” That dream includes idependence, but more importantly it creates family.

Larry: The Circle Theatre Players have a real affinity for plays that reveal a lot about us as a society of human beings striving in an often difficult world. Their love of the words of Steinbeck, words he often stated with the utmost simplicity and clarity, they nevertheless address the lives of the marginal and poor souls who find themselves dispossessed, and does it with understated drama that propels this story along.

There seemed to be two narrative arcs as the play unfolded, the contrast between the tragedy of life, and the inextinguishable faith in a better one if only we stay true to our goals. That message remains constant even today. And while Lennie is part of the tragedy, so is Curley whose woes are self-inflicted, and his wife, whose thirst for socializing and someone to just talk to is constantly thwarted. As Lennie, George Filieau was amazingly affecting, as was his pal George, a gorgeously gifted Bill Douglas.

Gail: I loved Filieau and Douglas in the leads. Griffin, Boyd, and Dennis Skiba as Slim brought real heart to their roles. Wanderman worked hard, but she is too mature for the role – Curley’s Wife is clearly still in her teens – and hampered by unattractive costumes and make-up, the very things that should be helping her appear younger and more breathlessly sensual.

Some of the smaller roles were played by less experienced actors, but a glance at the cast bios and a chat with director Eric Washburn convinced me that this group of actors really liked each other and enjoyed working together, which is one of the best reasons for community theatre to exist.

Larry: Gail, your support for community theatre over the past decade has been a bit of a lonely campaign to get those who attend the professional theatre to return to the roots, to see that there is remarkably resilient work being done in these smaller theaters too. This production is a shining example of that.

Gail: The amount of money a company has to spend, the size and furnishings of their performance space, and whether or not their performers have chosen to join a union, are no indication of the caliber of work they do. The biggest and brightest company can still produce a flop in a multi-million dollar house, while a community group can make magic with five actors and two chairs in a barn. There is no theatre not worth seeing.

Circle Theatre Players is celebrating their 30th anniversary this season. Their current facility, the Sand Lake Center for the Arts, a renovated 1835 church and former town hall, is nine years old and about to undertake a major renovation of its performance space, including the construction of a handicap accessible stage – right now each show starts from “the ground up” building one. While that will be good in many ways it may also stifle the creativity of the directors and set designers. I imagine CTP has used the space in various configurations over the years, and they started off “in the round” – literally at the round Church of the Covenant United Methodist Church down the road, hence their name.

Larry: Only some of the extensive credits listed in the program are repeated below in the traditional critic’s documentation of key people who put this show together. All of them, credited or not, took time out of busy lives, cleared their calendars for weeks of rehearsals and performances, and took many hours to bring this classic play to life. Researching and memorizing lines is not an easy task, and while there I noticed some minor stumbles and flubs, there were very few of them, and that is nothing short of amazing. Most people have trouble remembering four lines of a poem, much less a dozen pages of dialogue.

Washburn and producer-assistant director Jane Nielsen had to have had sleepless nights meshing this whole production together.

Gail: That’s the curse and the joy of community theatre. You grumble and groan as your evenings and weekends are consumed with rehearsals and tech, and then once you hear the applause you are ready to do it all over again tomorrow.

Speaking of applause, the final moment of this play is so powerfully tragic that the audience doesn’t want to clap, although the full house with whom we attended made an effort out of kindness. In the last production I saw of this play, the final moment was staged with George and Lennie looking straight out into the house. Here Washburn has then facing stage left so you see their faces only in profile, and you are not looking down the barrel of that gun.

Larry: The staging and technical aspects for Of Mice and Men are also remarkable since the performing space is not really a fully equipped theatre, designed for actors, but a multi-purpose space that serves a variety of events at the Sand Lake Center. With barely two dozen older lighting instruments, they were able to light four completely different scenes fully and effectively. That is a bit of a miracle, for sure.

With scenery changes they had to keep the props and set pieces to a minimum, especially since they had no wing space, flies or storage room backstage. And did you notice how well they employed the sounds of horseshoe throwing during the barn scene between Lennie and Curley’s wife? The balance of sounds, distant voices and what was happening on stage was just about as perfect. Someone was really paying attention to all the details which is why this play becomes so deep and meaningful when you see it. And see it you must.