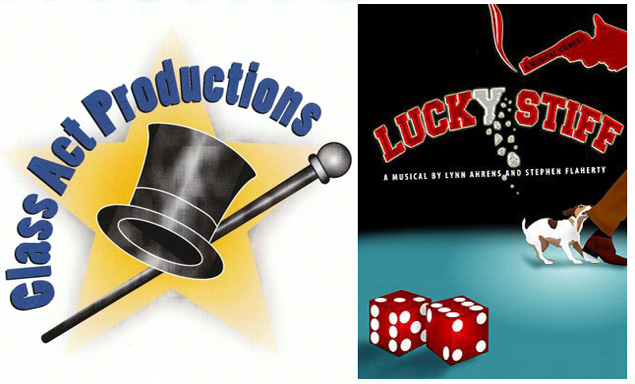 Larry Murray: Lucky Stiff is a daring choice for Class Act Productions. From the first moment it appeared on the off-Broadway scene in 1988, just about everyone has hailed the clever lyrics of Lynn Ahrens. Who else could come up with a love song called “Nice” that starts off “It was nice hating you…” It’s little wonder she won the Richard Rodgers award for them.

Gail Burns: This is the very first musical from the Tony award-winning team of Lynn Ahrens (book and lyrics) and Stephen Flaherty (music) who went on to fame and fortune with Ragtime and Once on This Island. Ahrens and Flaherty were taking a course in musical theatre, and this was their final exam, if you will, the culmination of their work. This shows in its tight construction and brisk pace – I imagine that their assignment was to write a 90-minute musical, which this is, once intermission and the laughter of the audience is shaved off.

Larry: One of the toughest things in the world is writing musical farce, Stephen Sondheim did it with A Funny Thing Happened on the Way to the Forum. That show opens with a chorus singing “Comedy Tonight” while Lucky Stiff belts out “Something Funny’s Going On” which, appropriately enough, ends with a gunshot and a corpse, setting up the whole premise of the show.

Gail: Let me see if I can give you the essence of the fun without giving too much away. Lucky Stiff, based on the British murder mystery The Man Who Broke the Bank at Monte Carlo by Michael Butterworth, concerns a young British shoe salesman named Harry Witherspoon (Oliver Ord) whose lackluster life is suddenly and dramatically altered when he is left $6 million in the will of his American Uncle Anthony. But the money can only be his if he takes the corpse (Michael McDermott) on a final vacation to Monte Carlo. In hot pursuit is the rival inheritor, the Universal Dog Home of Brooklyn, represented by one uptight chick named Annabel Glick (Erin Harwood). They are in turn pursued by the legally blind Rita La Porta (Katie Hughes), Uncle Anthony’s lover who believes she is also his murderess, and her hapless optometrist brother, Vinnie DiRuzzio (Brian McBride Land). Along the way they meet a mysterious Arab (Bill Depew) and a sexy French chanteuse Dominique du Monaco (Elizabeth Sterling), along with an assortment of others (Alan Angelo, Peter Caracappa, Henry DiMaria, Maria Lally Clark, Michael O’Farrell, Melissa Pelletier, and Cait Webber). Mayhem ensues! Who will get the money? Will the fact that Harry and Annabel are escorting a corpse scuba-diving and sky-diving be discovered? And what about that heart-shaped box?

Larry: As with Sondheim’s Forum, it’s tough to get all the ingredients to work together. Both Forum and Lucky Stiff are  shows that are challenging to stage – they can’t be either too “over the top”, nor “too refined” but rather somewhere between the two extremes.

There have been many promising revivals of Forum including one with Whoopi Goldberg only garnered mixed reviews – proving musical farce can easily fall flat if all the ingredients aren’t exactly right. Williamstown Theatre Festival finally gave America a brilliantly wrought Forum a couple of years ago. This is my first Lucky Stiff, and I am now sorry I missed the Theater Barn’s production (Gail’s Earlier Review Here) you loved so much.

Gail: I did love Lucky Stiff when first saw it at the Theater Barn in 2005, and I predicted then that it would become a favorite of community theatre groups, which it has. There have been quite a few productions regionally in the intervening years. But what I failed to notice then was that it requires six really strong singers, which is a lot for a community group to muster, especially in a spot like the Capital District where there are a number of opprotunities for amateurs and the available talent is spread pretty thin.

Larry: This production has the energy and dedication from the performers that is needed, but there was no catalyst to make it soar. Instead the whole exercise just fell flat for me, with constant accent slippage, vulgar barebones music accompaniment, untrained voices and missed notes, resulting in a shrill and lame evening of missed musical opportunity. And that barn of a theatre, the audience felt lost among all the empty seats. It’s totally unfair to put a small, growing company in such an oversized venue. It amplifies deficiencies and masks their natural strengths.

Gail: I thought there were some decent voices in the cast, but Gary M. Hoffman’s direction was lackluster and everyone was just struggling to fill the 1,000 seat cinderblock cave that is the Schacht Fine Arts Center Theatre. In a small house this could have been a charming show. As it was Hoffman and the company were hard pressed to fill space physically and vocally. Musical Director and pianist Maria Elmer had only percussionist Kelly Palmer to help her play the score.

Adam M. Coons was stretched mighty thin as Technical Director and Set Designer/Master Carpenter. He shared the Sound Design duties with Stephen Foust, and they were sadly the weakest element. Sound effects were so over-amplified as to be both painful and incoherent (was that a door slamming or SCUD missile exploding?), while the performers’ mics were frequently not turned on until a few words into their next line or song.

But despite these problems the bottom line is that Lucky Stiff is a tiny gem of a musical. It just doesn’t belong in a great, big house.

Larry: Ahrens and Flaherty not only channeled Sondheim, but started a trend of manipulating dead men in wheelchairs as comedy fodder. In 1989 the film Weekend at Bernies followed, as well as Weekend at Bernies II (2009). The concept of dragging a corpse along on adventures was then spoofed on SNL, and there were reports of people pretending dead people were alive for years afterwards. For example, In 2008, in Hell’s Kitchen (New York City), the New York Daily News reported that two men tried to pass off their dead friend as alive so that they could collect his social security check.

Gail: McDermott has both the easiest (no lines to learn) and hardest (gotta sit very, very, very still) role in the show. He does a nice job – I swear I never even caught him breathing – and even gets one brief “dance” number in a dream sequence.

Larry: The contrast when McDermott came back to life was simply brilliant. The fantasy sequence is a highlight of the show.

One of the worthy goals of Class Act Productions is to provide opportunities to and for actors, directors and others a chance for hands-on experiences in the theatre through performances, classes and workshops, and this complex musical certainly filled that challenge. Watching those who volunteered to be stagehands try to figure out where various set pieced belonged took me back to my own roots. I even heard a prompter’s line delivered from stage right during the nightmare scene. Community theatre has its moments of adoration and applause, but just as many of learning by doing.

Gail: Our first experience with Class Act Productions was their brilliant production of William Finn’s A New Brain, (See Review Here) directed by Michael Menshing, last May at the James L. Meader Little Theatre, a much more intimate house. You weren’t able to come with me when I saw their production of Dirty Rotten Scoundrels (Review Here), directed by Brian Avery, last August at the Schacht, but I was distraught then at how poorly suited this house was for this troupe. And now Lucky Stiff compounds that problem with lackluster casting and direction to wind up at a production level below what either of us feels comfortable reviewing.

We  like to see plenty of amateur/community theatre. Just last week we were at the Sand Lake Center for the Arts for a terrific community production of Of Mice and Men, (Review) and Lettice and Lovage, which opened this past weekend at the Ghent Playhouse, and is getting great reviews. Everyone is allowed a clinker, but I fear that A New Brain was the exception rather than the rule for CAP at this point. I wish them well as the progress and grow and look forward to returning when they have gelled into a more consistent pattern of excellence.

Class Act Productions is proud to partner with the Mohawk-Hudson Humane Society for this show. Anyone who brings a donation for the Humane Society gets $2 off the price of their ticket. The list of approved donations is available HERE.