Venture capitalists get rich on “Other People’s Money” at Oldcastle Theatre Co. 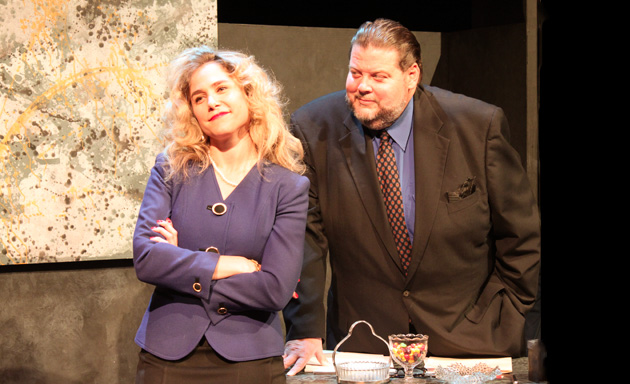 Venture capitalists get rich on “Other People’s Money” at Oldcastle Theatre Co.

Other People’s Money is a dramatic eye-opener at Oldcastle Theatre Co in Bennington, VT
by Larry Murray (Reprinted from his original Broadway World Review)

Ever since the Oldcastle Theatre Company in Bennington, Vermont opened its new theatre downtown they’ve been on a roll. Their latest offering is Jerry Sterner’s OTHER PEOPLE’S MONEY is one hell of a play, especially if you are wise to how money is made these days, and it is not by working hard, let me tell you. If tales of greed, lust and power pique your interest, here is a brilliant production of an older gem in Southern Vermont that is simply two hours of pure entertainment that might evoke a few gasps as you realize that what you are seeing is all basically true.

Just over the Massachusetts border from the Berkshires, Bennington, Vermont shares the region’s incredible affinity for well done plays by professional casts on subjects that are not the normal summer straw hat fare. With OTHER PEOPLE’S MONEY, they chose a complex play that hits close to home dealing in depth with one of the greedy practices that caused America to lose so many manufacturing jobs. It is possible that seeing this play will give you an inoculation against such tactics being successful in the future because all business is ultimately personal when jobs are involved.

In 1989 the play OTHER PEOPLE’S MONEY: The Ultimate Seduction, opened at the Minetta Lane Theatre in New York, and the production ran for two years. It was voted the best off Broadway play by the Outer Critics Circle. Mitt Romney would likely praise the play, since it gives voice to the logic behind corporate takeovers, often euphemistically called “reorganizations”.

Legendary corporate raider and billionaire Carl Icahn is still at it.

The play shows these parasites as they really are, cold, ruthless destroyers of jobs, communities and families. They love to pretend to take the high road and be called “reorganizers” but what they really do is take older companies who have paid their bills, provided employment to thousands and provided stability to communities for decades and dismantle them. By selling off the land, machinery, and raiding all the liquid assets, they can often make millions while throwing people out of work and guaranteeing foreign competitors a bigger share of the American market.

The play starts simply enough, as William Coles (Richard Howe) the general manager of New England Wire and Cable gives a quick introduction to the company, its owner Andrew Jorgenson (Phil Lance), and his secretary, Bea Sullivan (Paula Mann). The three pretty much run the whole operation, and from the outset is clear that Jorgenson cares a lot about his 1200 workers, but is also pretty bull-headed, behind the times and reluctant to turn over the reins to fresh management and thinking. His company is a sitting duck for the predators. As a result, the lives of everyone on stage and in the plant are about to change, and not for the better.

They are visited by Larry Garfinkle (a brilliant Paul Romero), a man whose sheer obese size screams “capitalist pig” and has uncouth manners to boot. Self indulgent, unfeeling and obsessed with money, his character is the embodiment of greed. He may be a handy caricature and a gross exaggeration of the sharks who prowl our economic waters today, but not by much. He visits the dowdy and grimy no-nonsense Rhode Island plant in an ostentatious stretch limo and asks where the nearest Dunkin’ Donuts is. He sends Bea in his limo to fetch a dozen and is aghast when she returns with locally made healthy ones. If all of this seems somewhat unbelievable, you share that reaction with the plant owners who dismiss the potential buyer as unfit to own it.

With the ominous notes of Richard Strauss’ Thus Spoke Zarathustra rumbling in the background the stage right wall parts, revealing the corporate raider’s office from which his side of the battle is waged. Plant managers on one side, raiders on the other, the stage is set.

The cast is uniformly brilliant, their characters so sharply drawn that they make this unlikely story become sadly believable. Romero as Larry the Liquidator dominates the stage from his office nook, taking on lawyer Kate Sullivan (a constantly morphing Jenny Strassburg) repeatedly as she tries to outwit and outsmart the intruder.

Back at the plant Andrew Jorgenson, the sixty-something who inherited the place from his father, knows how to say “no” and dig his heels in. His plant manager Bill Coles is onto the game but is sadly ignored and taken for granted by Jorgi, because the old duffer does not have the foggiest inkling of what evil he is dealing with, nor how to get to “maybe” much less “yes.” As Jorgi, Phil Lance shows us time and again that his heart is in the right place, but is unable to wrap his mind around, much less accept, this invasion of new economic tactics on his family business.

OTHER PEOPLE’S MONEY has the feel of “Our Town” at times, though the backwardness of Jorgi reminds one of the lessons in “Death of a Salesman,” the penalties of being behind the times. And over it all, like the devil himself, Paul Romero as Garfinkle the money grubber, bellows and blusters and laughs at their innocence and naiveté. In a performance of a lifetime, Romero sneers, drools and laughs mockingly and with such gusto that Mephistopheles himself would be jealous. No play has better captured and explained the noxious things involved in leveraged buyouts.

As the play unfolds Jenny Strassburg as the lawyer Kate tries to wake up Jorgi by explaining that once the stock is purchased and accumulated by Larry the Liquidator, he is no longer in control. An old school guy, he believes his friends who own his company’s stock would never betray him.

Over the course of the two act play we learn that what these vampires do is buy shares with money mostly borrowed from others and inducing other investors to go along with a hostile takeover. Then, by using the newly acquired companies’ assets as collateral, maximizing the companies’ value on paper, and raiding the liquid reserves, they finally sell them off piecemeal reaping millions, usually within a few years. Or take on so much debt to fill their pockets that they go belly up. Back in the 80’s these takeovers were even more brutal, to the extent that legislation was passed, poison pills invented and white knights courted. But if a company used any of these solutions they were still left weaker and less heathy at the conclusion of the corporate tussle.

As it turns out there is indeed a company called New England Wire Technologies in New Hampshire, and it is doing well. That’s because their stock is primarily employee owned, and that is perhaps the best assurance of stability. Unlike the blather issuing from the takeover gurus, it proves that just because a company is old does not mean it is obsolete. It is the greedy opportunist in the silk suit and stretch limo who is the villain here, for they are raping the foundations of American economic strength for personal gain. They are the ones who fight regulation because it makes them accountable, not immune.

As a play, OTHER PEOPLE’S MONEY is not all business, it has back stories, suggestive flirting between the lawyer and the takeover artist, and many other elements that makes for taut, suspenseful theatre with colorful characters that you will not soon forget. It is perhaps the major achievement, artistically, for the playwright. Jerry Sterner who made his fortune in real estate, and retired to write. He is buried in Washington Cemetery behind his old building in Brooklyn. His head stone is inscribed sardonically with: “Finally, a plot.”