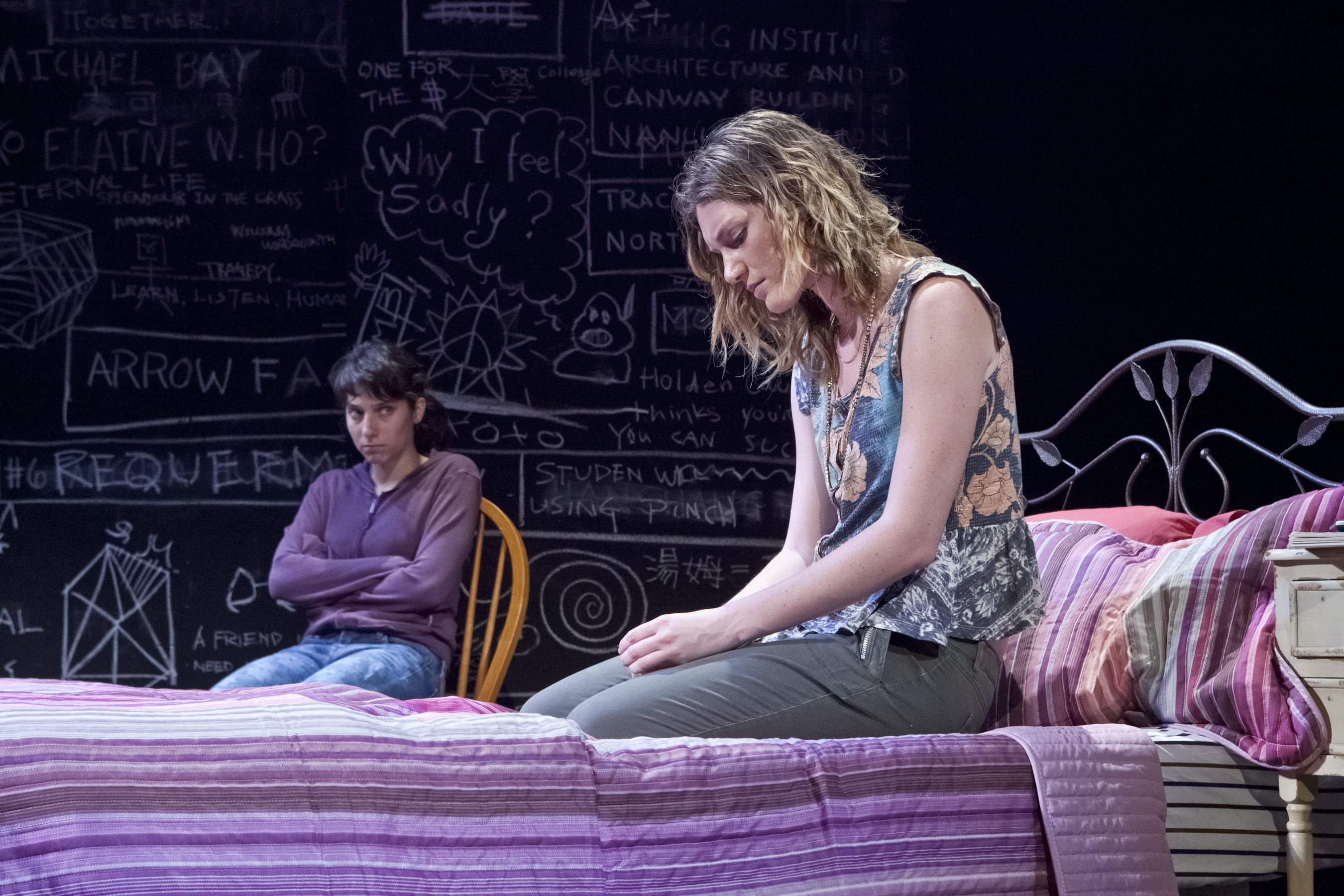 Ask anyone over 20 if they would like to turn back the clock to their teenaged, high school days and the majority will recoil in horror. No restoration of energy, hair, sexual or athletic prowess, eyesight, etc. can compensate for the misery and insecurity of late adolescence. But while few desire a permanent return, that phase of life can be an interesting one to visit, which is what Anna Ziegler invites you to do for 90 minutes in Life Science.

The play follows the lives of four classmates in their senior year. Dana (Jess Jacobs) is refusing to even apply to college and longs to do something to make a real difference. Tom (Julian Leong) is applying, probably, to Yale, where he will, probably, be accepted because he not only meets the academic requirements but because he is a double minority – an adopted Asian Jew. Mike (David Kremenitzer) knows his first choice school but is unable to decide whether he wants to be with Dana or Leah. Leah (Arielle Lever) is pretty sure she wants to be with Tom, but worries about how her mother will cope when she, the only daughter, leaves the nest.

Will Dana and Mike get back together, and, if so, will she sleep with him? Will Leah and Tom get back together? (She won’t sleep with him.) Will Dana’s family adopt an orphaned Palestinian boy? We learn the answer, sort of, to some of these questions by the time the cast walks upstage to the strains of Bob Dylan’s “Forever Young” which is the one thing none of us can ever be.

Ziegler started writing this play while she was teaching high school, and she was, literally, mimicking her students. That is fun to do as a writer – find a unique voice and replicate it – but it doesn’t necessarily mean you have a play, or even a story.

And thus far in this review I have omitted two key pieces of information about her characters. They are all wealthy and Jewish and are students at an academically elite independent Jewish Day School in the Washington, DC, area. Ziegler reveals the teens’ religious/ethnic background in dribs and drabs, but never explains to you the very specific world in which they live. As the graduate of an elite independent all girls’ day school in New York City, I understand it better than many, so things seemed pretty normal to me, but I know I am in the minority. The independent school world is a unique universe almost impossible to describe to those who have never inhabited it.

Not only does Ziegler fail to explain the world in which these kids are living, I think she has also watered down the religious aspect of a Jewish independent school. Families who choose to send their children to Jewish schools have very specific reasons for doing so and such schools are not just clones of non-sectarian independent schools. The boys would wear yarmulkes in school and Jewish faith and identity would play a much larger role in these teens’ education.

Even having read some pre-opening publicity, it took me a good half hour to remember why everyone in this play was Jewish. And that is sad because Leah, the character with whom I think Ziegler identifies the most closely, has some very interesting concerns and opinions about being a young, Jewish woman in today’s world, that would be so much more interesting if the playwright took the time to give them their proper context.

That being said, the four Equity actors and director Joe Cacaci do a fine job with the script they are given. The actors are all well in their twenties but “pass” convincingly for teens. Kremenitzer is saddled with the least fleshed out and consequently least likeable character, but the rest of the cast easily win audience sympathy as the reenact senior year – a time when life as they have always known it if fated to come to a crashing end, whether they are ready or not.

Jacobs’ has the most implausible role. It is easy to believe that a scared and confused young woman would glom on to the idea of motherhood as her salvation and the easy route to adulthood – way too many teenaged girls have children for that very reason – and that Dana would see the adoption of an orphaned Palestinian, whose parents have been murdered by Israelis, would be a way to accomplish something has an individual that will make a statement and an atonement all in one. But it is completely implausible that her parents, who are otherwise described as aloof and disinterested in their daughter, would support the idea.


The relationship between Tom and Leah is rather more interesting and charmingly written than any of Mike and Dana’s rather predictable angst over him being “ready” for sex and college and her not. Leong and Lever are sweet and appealing in their roles, and Ziegler has really given voice to their characters’ individuality and angst.

Chien-Lu Peng has designed an entertaining set encased in what appears to be chalkboard filled with notes and scribbles such as would be found in the margins of any high school textbook. “Writing” the set, in which scenic artist Carl Sprague undoubtedly had a hand, must have taken almost as long as writing the play!

All theatres these days are obsessed with the idea of attracting teens and 20-somethings as regular ticket buyers – training up a new generation of supporters, as it were – and Berkshire Playwrights Lab encouraged me to bring a teen or two with me. It was Solid Sound weekend in my neck of the woods, but I did find a young woman, a 17-year-old rising senior at BarT (Berkshire Arts & Technology Charter Public School), who likes theatre better than music, to come along. I also brought a life-long friend with whom I had shared many ludicrous teenaged adventures. And I think that we two 50-somethings enjoyed Life Science better than my teenaged friend, as it brought back vivid memories of escapades shared and now thankfully passed.

Personally, I don’t think that adults writing shows about teenagers, especially when those teens aren’t played by teens, is the best method for luring teens into the theatre. In general, young people want to be adults and they are also know good entertainment when they see it. My teenaged companion enjoyed Life Science and certainly the topics of parental and academic pressures and expectations surrounding college applications and acceptance resonated with her. My comments on the relative merits of the characters and their individual plot-lines also reflect her opinions shared with me on the ride.

There are a few scenes in which the characters “talk” electronically via text/chat/e-mail, during which no one speaks out loud and you see their typed words projected on a screen. This actually worked pretty well and held my attention. The one sustained scene staged this way wore thin towards the very end, but I was surprised how engaged I was with watching two actors pretend to type! But my young companion confirmed my suspicion that teens do not use full sentences in their electronic communications as is shown here. I can understand why Ziegler and Cacaci chose not to write the dialogue in the shorthand that is used, but it does break any notion that these are real teenagers.

Ziegler has had two plays featured in the BPL reading series over the years – Variations on a Theme in 2008 and An Incident in 2011- but Life Science is a published work with previous productions under its belt. In his curtain speech Cacaci, who is also a Co-Founder and Co-Artistic Director of the BPL – explained that their “five year plan” had included the mounting of a fully staged production in this, their sixth season, but I was surprised that they hadn’t chosen a script they had previously nurtured. The last thing Berkshire County needs is yet another theatre company. I had hoped that BPL would adhere to their mission statement (see below) and allowed us to see the next step in the development of a play in which local audiences were already invested.

Berkshire Playwrights Lab is the area’s only theater dedicated exclusively to encouraging, developing, and presenting new plays. Through readings, workshops and fully-staged productions, the Lab provides emerging and established writers with a professional and creative environment, while offering audiences the engaging and provocative opportunity to share in the dramatic evolution of premiere works.