Review: “My One and Only” is a Crazy Big, Tap-Happy, Musical in Cohoes, NY 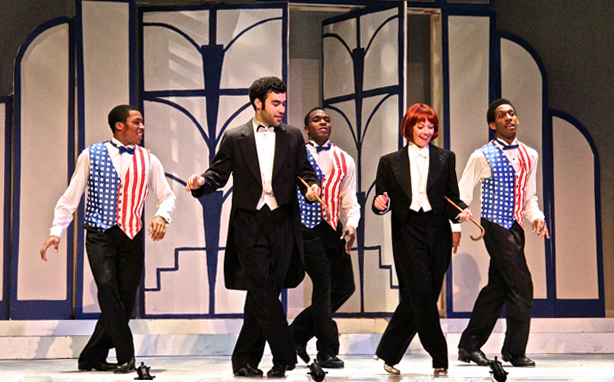 Review: “My One and Only” is a Crazy Big, Tap-Happy, Musical in Cohoes, NY

Review: My One and Only at the Cohoes (NY) Music Hall Simply Sparkles
by Gail M.Burns and Larry Murray

GAIL BURNS: Well, Larry, My One and Only (MOAO) is one big, tap-happy treat at Cohoes. I had a bundle of fun!

LARRY MURRAY: There is both so much fun, and a sort of righteousness that goes with being able to make so much noise with your feet! What did you think when you first saw MOAO on the Cohoes schedule? Did the old theatre buff in you say:”hooray and about time”?

GAIL: I was excited to have another chance to see this “all-new” Gershwin musical, which I’d seen on Broadway in 1983, with Tommy Tune and Twiggy in the leads. And I was surprised to realize it had taken me 30 years to have a second chance at it. I had very happy memories of my first encounter.

LARRY: Well so do I Gail, I saw it in its pre-Broadway run in Boston and enjoyed it very much, but we saw very different shows.

GAIL: Indeed, the story of how MOAO made it to Broadway reads like a sequel to 42nd Street. There’s a great retelling of it here [link], by Don Shewey. for our readers who enjoy backstage history. But we are here to write about what C-R Productions has done with the show.

LARRY: Don and I both wrote for the Boston Phoenix during different decades, and it broke my heart when he left Boston for bigger things. Shewey lived through the years that L’enfant terrible Peter Sellars was driving Boston theatre critics crazy. (He was director of the Boston Shakespeare Company for the 1983–1984 season.)

He staged the first version of MOAO, was fired, which brought about the Mike Nichols pre-Broadway version which I saw in Boston; and then finally the one you saw, the one that actually opened on Broadway. By then, Tommy Tune was doing everything except tearing the tickets: a one man whiz as director, choreographer, and lead performer. From then on Tune became central to every show he was in, and they all had his signature DNA in its construction and performance. In 1995 while doing Buskers he broke his foot and was in a cast, on stage, for six weeks, He still dazzled everyone. Happily with My One and Only, you can be dazzled by just the Gershein music…

GAIL:…but people love it for all the fabulous dancing! In the Cohoes production, director/choreographger Christopher George Patterson allows the wonderful cast to dance up a storm.

LARRY: There were times the sounds of all those feet hitting the ground was almost thunderous. In the end it is the dancing that makes this show sing, and that’s a good thing because the book is woven of the barest gossamer. Nevertheless, this whole production simply shimmers on the Cohoes stage. In the end all the theatrical elements work to simply focus the eye on the dancing, and this production has solid bones.

“There probably aren’t a lot of actors my age who tap dance.” Actor Christopher Walken

GAIL: Indeed. In its final iteration MOAO was all about the direction and choreography, and Tommy Tune’s footprints are still all over it.

LARRY: Nicky Romaniello who takes on Tunes role isn’t as tall as Tune whose height amplified his legs – but inch for inch he still has incredible energy and just pours it on.

GAIL: I was happy to note that in the role of Captain Billy Buck Chandler that Romanielllo retains Tune’s native Texas twang. Just as his beloved aquanaut, Edythe Herbert (Erin West), has Twiggy’s London accent.

LARRY: From the moment that the New Rhythm Boys – in this production a barbershop trio – (Phillip S. Deccus, Romainson Romain, Avery Royal) Opened the show with “I Can’t Be Bothered Now,” they sent up a shower of sparks that set many members of the audience afire. Glancing over the crowd I spotted both some younger folk and an unmistakable veteran who knew the timeless craft well and obviously appreciated its difficulty. God, how I have miss the joys of great tap dancing – just being in its presence always makes me want to smile and shuffle along.

GAIL: Well there’s plenty of it here. I was one of the attendees bouncing in my seat.

LARRY: It seemed the whole cast enjoyed themselves immensely. Tap dance is not dead, and still seems to appeal to young people who have taken the trouble to master it.

GAIL: I was really excited that there were so many black performers on the stage. In 1927, when this show is set, tap was still primarily a black artform, and Patterson matched the choreography to the era and gave it an appropriate ethnic feel. I loved the running gag about “We don’t get too many white, tap-dancing aviators in here.” Classic.

LARRY: Romaniello certainly held his own against Gregory Omar Osborne’s Mr. Magix in the challenge dance to the title song. Osborne and Daryl Stewart as Rev. J.D. Montgomery gave real heft to their secondary characters which constrasted nicely with the fluffy storyline for the leads.

GAIL: I could hardly wait for the second act duet between Ellisha Marie’s fiesty aircraft mechanic Mickey and Kris Anderson’s dastardly and heavily accented Prince Nicolai Erraclyovitch. When they sang “Funny Face” both performers proved how wasted their big voices and comedic talents were in such small roles.

“I liked tap dancing because I liked hearing the results of my movements.” New York City Ballet Dancer Suzanne Farrell

LARRY: With more than a dozen Gershwin songs and virtually non-stop dancing, its a wonder the cast didn’t run out of breath long before the final curtain. For no other reason than to be wowed by the stamina of these dedicated performing artists, let’s hope people make a point to see this show. Those of us who are a bit older already love the timeless music of Gershwin and the nostalgia of the era when flying to Paris solo made news. For the younger crowd there are sure to be ideas they haven’t met before. Some may even find a way to include elements of tap, shuffle and soft-shoe into their own movement vocabulary.

I was about to suggest we wrap this up, but we haven’t even mentioned David S. Goldstein’s art deco sets and the incomparable costumes by Jimm Halliday.Your turn Gail.

GAIL: Every time the chorus boys and girls appeared they were in another dazzling ensemble.

LARRY: Halliday’s creations sparkled, he buys sequins by the thousands, and you need every one of them to stand up to the showy dancing.

GAIL: This show really is all about the corps of dancers, and all are marvelous. Goldstein’s sets were great and took the action from New Jersey to “tropical” Staten Island to Morocco. I was less enamored of his lighting.

LARRY: As an old backstage hand, I can be critical but I think the sets and lighting at Cohoes are evolving. There is a positive thrust to the overall direction they are heading and change does not come cheap. During the past year the company has upgraded a lot of its lighting and the set designers have been creating glossier sets. Those Broadway shows cost all those millions because of the complicated electronics, computers and mechanized set changes. But we are not on 45th Street and Broadway, we are on Remsen Street.

In Cohoes, they still do everything the old fashioned, hand crafted way, pulling ropes for the scenery, moving set pieces manually, and trying to created fluidity of illumination with barely a hundred lighting instruments and what seems to be a manual light-board without sufficient presets to add subtle touches as the cast moves about. Most people don’t notice those things, but I do, and sometimes have to bite my tongue. Still I want to emphasize for my Braadway buddies that over the years that has been much to marvel at, and the future will see still more improvements as they work out the occasional roughness of the transitions. Sometimes set drops and follow spots need more rehearsal time, too.

David Goldstein, Theresa McKenzie and Robert Norman put these enormously complicated shows together in record time, a few weeks at most, and money does not grow on trees, as they say. So their creativity has been smoothing and improving in what has to often be a “make do” situation. There isn’t a technical problem that can’t be solved with more money, but given the modest resources, the solutions have to come from their own creative imaginations. That’s one part of theatre that has never changed. I know. I once saved coffee tins for improvised footlights in the first theatre company I worked for. In time we bought the real things.

Finally the pit band – some six hard working musicians – gave the musical a joyous sound, except when one player was a bit lacking. In this case I think the player hadn’t carefully tuned his instrument to the others pitches, though the small gap heard at the outset of Act I seemed to have pretty much resolved by Act II. Music Director Ryan Bolinger has recruited a nice sounding ensemble of players and the orchestrations he chose worked very well with the score.

GAIL: But those imperfections aside, this is a return to the glory days of C-R Productions under Tralen Doler’s talented hands.

My One and Only is so much fun…and you can bring the kids. Though you should be aware that there are just a couple of very 1983 words in there of the blue sort, that you wouldn’t expect to hear in a Gershwin musical.

LARRY: I hardly even noticed them, today’s television being so much more explicit and I remember when “hell” and “damn” were enough to get your mouth washed out with soap. So I say, hell, bring the whole family. They’ll have a damn good time.

As you can see, tappers use special shoes with metal “tap” plates added to make their sounds. “Classical” tappers use their arms and upper bodies to blend movements of ballet or jazz into their tap routines. All “Hoofers” try to use every part of their shoes to make their feet sound like drums.

Clogging is similar to tap dancing. Cloggers perform with an up-and-down body motion and tend to make the most sounds with their heels. Tap dancers stay light on their feet and tend to dance to the melodies of music, rather than to the beats. Cloggers often dance in groups, such as in Irish step dancing.