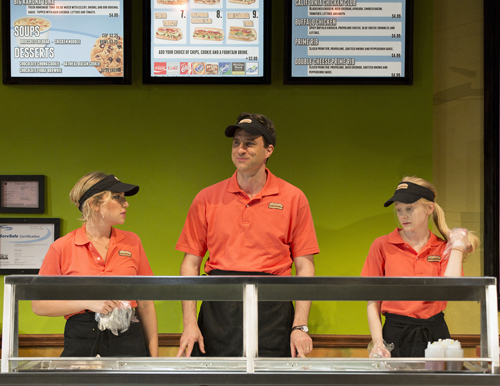 Once upon a time in America every city and town had its own locally owned and operated set of restaurants. One of the joys of traveling was arriving someplace new and asking the locals where they liked to eat, and then trying them out. Some places still cling to real food, places like Williamstown. But in the rest of America, that all changed in the 1970’s and today the American food industry is dominated by franchises of rubber-stamp food that is boring, monotonous and profitable. It stopped being “cheap” a long time ago. The largest and poorest group of American workers in the US are those that labor at these chain operations, some 3.5 million of them, and they live the life of the eternally trapped with all sorts of rules and no individuality or creativity allowed.

In Bess Wohl’s fascinating new play American Hero we meet three workers and one boss, and guess who keeps the owner’s operation functioning. Sheri, Jamie and Ted fill out their employment forms, meet the boss and in the first section of the play are in a race to prepare and wrap their Heroes (or Subs, Torpedoes, Hoagies or whatever) in under twenty seconds.

In the unnamed franchise where they work, it seems everything is dictated by a flawed company manual. Then, on opening day when the owner is nowhere to be seen, they resolutely carry out their responsibilities as expected.

The employees stay because they really need the work. When supplies begin to run out, the corporation wants the workers to keep the franchise open, but of course it does not tell them how to refill the dwindling supplies.Trying to get someone to actually pay heed to the mounting problems is futile. How they deal with an impossible situation in the face of frustration and indifference is the point of Wohl’s play, and in the end, her story has its heroes.

That sets up the foundation for the rest of the rest of this “slice of life” play as we get to know the people behind the visors and uniforms. We learn why they don’t have much of a life outside their jobs, and – in fact – their lives are a mess. To begin with these employees who make maybe $8 an hour simply have no money to spend, no health insurance, no nothing. They contribute nothing to the American economy (they can’t even afford to eat out themselves) but don’t worry, they are important because they contribute plenty to the corporate bottom line.

As Sheri, we meet introverted and mousey Erin Wilhelmi who has a whole life going on in her head but is taciturn in person. Sheri manages to work two of these lousy food service jobs and has to sleep in her car, so, big surprise, she is constantly exhausted. The desperation of her condition is matched by her resolve to survive, and she gives up her privacy only grudgingly. When she fills out her job application her body language tells us a lot as she tries to shield her scribbling from the watchful eyes of the owner. Sometimes small gestures can be funny in a sad way. In the moments before she is hired she has no inkling that she is about to become an American Hero. But not until she has suffered more.

Ari Graynor in the role of Jamie is pretty much her opposite, an outgoing, party-girl whose life is in its complex stage with courts, child custody and companionship all looming as big concerns. Outgoing without revealing too much, she too has secrets.

The third employee is Ted, (James Waterston) who with his business degree chafes under the rules but still defends them loyally. He has experienced corporate culture and wants back in, though right now he is taking any job since he was recently ousted from the executive suite. Turns out he has a secret problem too, and is “really” working on it.

As Bob the owner, and several other characters, Omar Metwally comes and goes, spicing up the interactions between the three workers as a customer and corporate executive as well as the mysterious boss who has sunk close to half a million in his franchise not knowing that the whole corporate operation is in disarray and headed to Chapter 7.

It is surprising how much Bess Wohl’s American Hero has the feel of Jean-Paul Sartre’s No Exit. Perhaps that’s because she may also see that painful philosophical arguments are most persuasive when presented as fiction, dotted with a little humor. The themes and memes presented in American Hero is that the individual is still the cornerstone of economic growth, that when given a chance to innovate, most everyone can find and use those creative muscles once again, and within that gift there is always hope. On the other hand, as the play demonstrates all too clearly, when the dull hammer of rules, regulations and corporate ignorance come into play, everyone points the finger at everyone else and nothing positive is accomplished.

The production on the Nikos Stage looked great, everything about the retail sandwich shop was close to authentic, right down to the counter where sandwiches were prepared in those twenty seconds. The only problem was that while the set was detailed and beautifully finished, the props i.e. the food in the counter’s bins were virtually empty. So instead of a hilarious scene with food flying as they practiced making subs, you heard the clatter of empty containers and saw maybe one leaf of lettuce and one tomato with all the rest of the cold cuts and condiments being mimed. Having been a method prop person myself at one point, I almost wept at the lost opportunity. Lucille Ball wept as well. Remember those chocolates on the conveyor belt? Well,this scene cried for realism to take it from humorous to hilarious, and to underscore the humanity of the three workers at the same time.

Beyond that, director Leigh Silverman really kept things moving, through the routines of putting up and taking down chairs and stools, turning the sign on the door, putting on and taking off plastic gloves, and parading the mostly empty containers back and forth to the chiller. By repeating the opening and closing procedures over and over, it effectively drove home the point that the work in franchises is dull and boring.

What I admire most about American Hero is its effort to reflect life authentically, and while it is not a perfect play yet – Wohl and the cast were making changes right up to the opening – it is close. Its characters are well drawn, it has context and subtext galore, and brings to life the people we interact with behind the counter or register. How odd that we see them almost every day but never give them a thought.

American Hero a meaty play with plenty to chew on, so be sure to go and grab a bite.