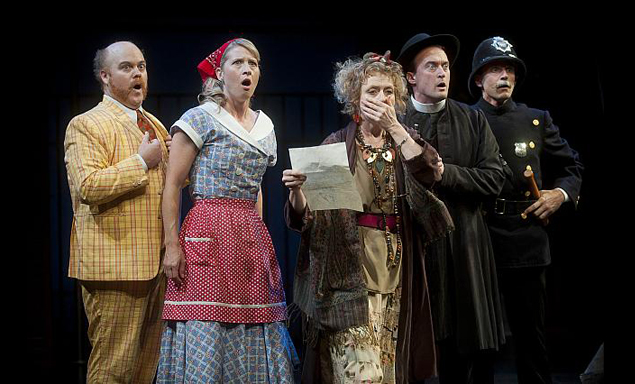 Review: This Rarely Produced “Love’s Labour’s Lost” is set in the 1940’s
by Gail M. Burns and Roseann Cane

Roseann Cane: I had high hopes from the getgo when the charming and exuberant Tony Simotes bounced onto the stage to welcome us to the press opening of Love’s Labour’s Lost. As the play opened, his announcements continued over the radio–a 1940s era radio whose purpose, I trust, was to transport the audience to what director Lisa Wolpe describes in her notes as “…the provocative backdrop of a post-war 1940’s–a time of picking up the pieces while forging new ground in women’s rights and capabilities.”

Gail M. Burns: For a Shakespearean play, Love’s Labour’s Lost is just full of women, and Wolpe has added to their number by casting a woman, Paula Langton, as the schoolteacher Holofernes. She and her actresses also do a good job of giving the ladies distinct personalities, in spite of few spoken lines, (Did Alexandra Lincoln as Jaquenetta have more than five lines?), although they are undoubtedly drawing on clues in lines and scenes which Wolpe cut. She cut about a third of the text, and this production still runs two and a half hours. When Shakespeare & Company last mounted this play – outdoors to The Mount in 1999 – it ran three hours and I believe they made cuts then too.

Roseann: In this rarely produced Shakespearean comedy, the King of Navarre (here played by Jason Asprey), and his three lords, Berowne (Mark Bedard), Dumaine (David Joseph), and Longaville (Andy Talen), take an oath to devote themselves entirely to scholarship (and avoiding the company of women) for three years. Then the Princess of France (Brooke Parks) and her three comely attendants (Kate Abbruzzese, Kelly Galvin, and Nafeesa Monroe) arrive for a visit. Naturally the King falls in love with the Princess and the lords fall in love with the ladies. Enter the saucy wenches and lascivious fools, and merriment, identity tricks, ribaldry, and a dash of heartbreak ensue.

Gail: Love’s Labour’s is no one’s favorite Shakespearean play, but it doesn’t make the bottom of the list either. There is a lot to like about it – excellent clowning and charmingly poignant romance in abundance – even though it is over-long and disjointed. Unlike any of Shakespeare’s other comedies it is based on relatively current events of the time, specifically the events leading up to the 1572 St. Bartholomew’s Day Massacre which occurred about a quarter-century before the play was written. In fact, reading over the introduction to the Arden edition of the play, it occurred to me that Love’s Labour’s is so incomprehensible to us today because it is too full of topical humor. Sort of like watching an episode of The Daily Show from the 1590’s.

Roseann: But why did Wolpe set the play post-World War II? I simply could not buy royal oaths of scholarship, or really any of the plot twists and turns, happening in that era. It saddens me that the conceit served only to distract and confuse.

Gail: I agree with you, I didn’t think the change of era worked for the play, although it did for the costumes and music – what was the fun little instrument Langton was playing? A mandolin? A lute? A soprano banjo? But while the ladies’ costumes were glamorous, when the Princess and her ladies appeared in slacks I was momentarily confused, but of course that would have been permissible for women camping out in the late 1940’s. L.L. Bean probably sold the gear!

Roseann: While the many strong performances couldn’t save the play for me, kudos are in order. Especially good were Asprey, who brought poignance and depth, providing a striking contrast with the abundance of tomfoolery; Charls Sedgwick Hall as Boyet, the Princess’s attendant, who found just the right balance of intelligence and playfulness; and Michael F. Toomey as the wildly histrionic Costard. Brooke Parks made a fetching and tender Princess. Paula Langton was a showstopper as Holofernes–at once a good thing and a bad one. Talented and unique, Langton seemed, through no fault of her own, to come from another play entirely. Perhaps Wolpe cast her in this male-schoolteacher role to bolster her theory about the post-war 1940s “…forging new ground in women’s rights and capabilities.” This only created a jarring distraction.

Gail: Frankly, while I enjoyed Langton’s performance and musical numbers, nothing about her costume or deportment said “schoolteacher” of any era to me. But she was teamed with two men who can spin comic gold out of the coarsest straw – Josh Aaron McCabe as Nathaniel and Ryan Winkles as Dull – so I enjoyed her scenes. Winkles got to show off his physical comedy chops in a delightful silent moment where he fell asleep while on watch.

Toomey is another actor who can always make me laugh, and I really enjoyed him as Costard, in his custard colored suit with his fringe of naturally red hair fluffed up like Bozo the Clown’s.

On the distaff side Abbruzzese’s tough-as-nails Katharine and Monroe’s sly and sexy Rosaline caught my eye. I wish I could have understood more of the humor in Edgar Landa’s Don Armando, but the combination of a thick Spanish accent and Elizabethan couplets did me in.

And I thought Bedard was a smooth and satisfying Berowne. His romance with Rosaline is very modern and therefore accessible.

Gail: What? You didn’t LOVE those dancing Russians? That was my favorite comic bit.

Roseann: I did enjoy those dancing Russians, actually. But otherwise, Dibble’s lavish choreography, though beautifully executed, disrupted the fluidity of the play instead of enhancing it.

Govane Lohbauer’s costumes were for the most part lovely, especially those created for the women in the cast. Junghyun Georgia Lee’s set was pleasant enough, but rather familiar to Shakespeare & Company fans. One of this company’s delightful hallmarks is the physical agility of its actors, but in this production, the all-too-familiar ladder to the second tier of the set was yet another awkward distraction. Like many other aspects of this production, the climbing characters seemed forced and inappropriate.

If I may be forgiven for borrowing from another Shakespearean play, King John, I think the Bard said it best:

Therefore, to be possess’d with double pomp,
To guard a title that was rich before,
To gild refined gold, to paint the lily,
To throw a perfume on the violet,
To smooth the ice, or add another hue
Unto the rainbow, or with taper-light
To seek the beauteous eye of heaven to garnish,
Is wasteful and ridiculous excess.

Gail: Yes, this is indeed Shakespeare’s Everything-And-The-Kitchen-Sink play, but I found more than you did to enjoy in its merry antics. Love’s Labour’s Lost is sort of like our infamous Berkshire weather, if you don’t like what’s happening now just wait a few minutes and it will change. I think for the large part Wolpe’s cuts and changes made this behemoth enjoyable and accessible it a modern audience, for whom it is a largely unknown Shakespearean treat.