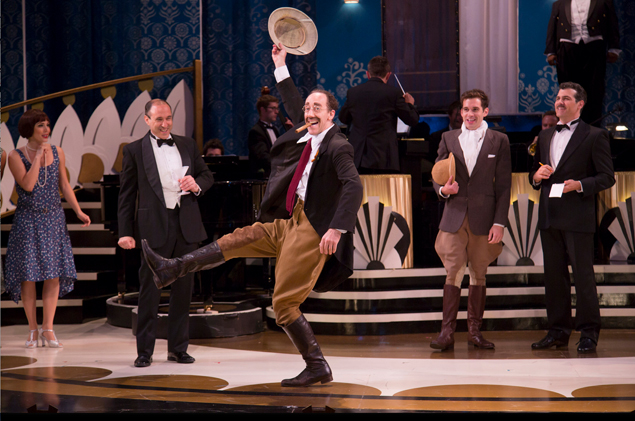 Larry Murray: Hooray for Jenny Gersten and the Williamstown Theatre Festival (WTF) for opening their third season with an outrageous musical, Animal Crackers. The original Marx Brothers Broadway hit was made into the film just about everyone has seen. The modern day actors who play the Marx Brothers get away with some of the most outrageous antics ever seen on a Berkshire stage, and made me surrender my staid composure.

Gail M.Burns: Actually, in these days of small cast comedies where a handful of actors play a variety of roles – such as The Hound of the Baskervilles – I think we have seen Marxian zaniness on local stages in recent years, but not their level of anarchy. There was no fourth wall for the Marx Brothers, sometimes I don’t think there was even a floor! It would be just like Harpo to roll it up and put it in his pocket in the middle of a big dance number.

Larry: Many people read the first few lines of a review like this and assume that the whole show is a send-up of the hilarious Groucho, Chico and Harpo, plus Zeppo, but this is no gag-every-second show, it has some beautiful songs and great dancing in it as well. The plot is often looney-tunes but the book has many subplots that don’t involve the famous Captain Spaulding, but reporters, society types and artists.

Gail: Again, this was typical of stage musicals of the 1920’s – Animal Crackers opened on Broadway in 1928 and was the Brothers third stage success. Plot was secondary and variety was considered essential. Hence you had a sort of layer-cake of comedy, romance, song and dance, and cheesecake (ie scantily clad women).

And yes, Zeppo is in this one. He was in all three of the Brothers’ stage shows and their first five extant films. Here he is played, on and off, by Adam Chandler-Berat. Zeppo’s character name is Horatius Jamison, and you can spot him most clearly in the opening number and in “We Are Four of the Three Musketeers” towards the end. Poor old Zeppo. When he left the act, Paramount tried to cut the Brothers’ salary, to which Groucho replied “We’re twice as funny without Zeppo.”

Larry: Animal Crackers is set up like a vaudeville show, with a dozen discrete scenes in each of the two acts. The film gets the story told in an hour and a half or so, but the stage show is a full two hours, so there is more time to fill with various “acts” as the evening progresses. Groucho gets a couple of long comedy monologues, Harpo plays his harp, Chico the piano and everyone gets a turn on stage. The dead giveaway for the vaudeville style is that the stage is completely cleared after each number and new players alternate in the next scene, only to return two scenes later if you catch my drift. Perhaps that is why the audience leaves remembering a tap dance number or a surprising entrance or exit.

Gail: This production is an adaptation of the original stage show by director Henry Wishcamper. There have been a few other stage versions presented over the past thirty years. This one retains some of the original score but also interpolates other, more popular, songs by Bert Kalmar and Harry Ruby. And it leans heavily on the 1930 film as well, although the goal of that was to recreate the stage version, so it is fairly safe to say that it is an accurate window on that production. I was thrilled that Wishcamper reinstated the fantastic “DuBarry Scene” at the end, which is the stuff of theatrical legend, instead of using the more logical film ending.

Larry: Everyone played a variety of roles, even Joey Slotnick as Groucho/Captain Spaulding who was amazing. There were only nine principals in the cast, though there seemed to be an army of swift stagehands that quickly moved props and furniture pieces off the tight playing area. Slotnick was in the Goodman Theatre’s version in 2009-10 as was Jonathan Brody as Chico/Emmanuel Ravelli and Mara Davi as Arabella Rittenhouse and Mrs. Whitehead. The rest of the cast was new for this production.

Gail: Slotnick and Brody were dead on in their impersonations. In fact I think Brody was a better Chico than Chico was! He has a twinkle in his eye and is an excellent piano player. (Both Chico and Harpo did stints as piano players in bordellos in their youth.)

While I liked Brad Aldous as Harpo/The Professor, and was duly impressed that he pulled off both a harp and a tuba solo, he somehow missed a core essence of Harpo. For some reason Harpo has been played by women in many stage shows concerning the Brothers, as he was in Wishcamper’s staging at the Goodman, and I can understand why. There is a certain purity and agility that it is difficult for a grown man to recapture, although there was never anything effeminate about Harpo, and he was not a young man, being 40 the year Animal Crackers opened on Broadway.

Larry: As Mrs.Rittenhouse, I loved Ellen Harvey who seemed much younger than the society matron in the motion picture, who was unforgettable. Wasn’t that Margaret Dumont?

Gail: Groucho referred to Margaret Dumont as the Fifth Marx Brother, and she appeared in both the stage and film versions of Animal Crackers. To me, recreating her visually and vocally would be as important as recreating any of the Brothers, but here she is younger. Ellen Harvey looks more like Natalie Schafer (Lovey Howell on Gilligan’s Island) than Dumont, and lacks that ladies immovable sense of gravity, but she is fun and funny and her strong operatic soprano adds greatly to the ensemble numbers.

Larry: I was impressed with the comedy chops that just about everyone in the cast demonstrated, especially Jacob Ming-Trent as Hives and Roscoe W. Chandler. When he launched into “Keep Your Undershirt On” with the “Vaudeville Girls” that opens act two, I was blown away by his sense of timing and physical comedy. I think the Marx Brothers infused everyone around them with their zaniness.

Gail: The Marx Brothers really had it made as celebrities. They had international fame and complete personal anonymity since no one ever recognized them out of costume. Groucho had to grow a real mustache in later life so that people would believe it was really him on television. The brothers also looked very similar and could (and did, particularly on stage) go on for each other. Groucho is quoted as saying the Zeppo played Captain Spaulding better than he did and he would have gladly surrendered the role if only they’d let him smoke in the audience. So it was fun that Wishcamper allowed his “Marx Brothers” actors to appear on stage in minor roles, sans costume/make-up and completely unrecognizable.

Larry: While the production has some topical references and the benefit of updated theatrical lighting and sound, it was a relief to see the characterizations of the Marx Brothers left alone. Can you think of any productions where they were reimagined?

Gail: Staging a Marx Brothers vehicle without any Marx Brothers always raises the question of whether you have your actors play Harpo, Chico, Groucho, and Zeppo, or whether you let them create their own interpretations of the Professor, Emmanuel Ravelli, Captain Jeffrey T. Spaulding, and Horatius Jamison. Wishcamper has done the former, which is undoubtedly what the audience wants although I think doing the latter would be fascinating. The Brothers were always billed by their stage names, but they always played other named characters, even though they were always ultimately Harpo, Chico, Groucho, and Zeppo. But they were never Adolph, Leonard, Julius, and Herman Marx on stage or film.

Larry: For me one of the highlights is when the lovers Mary (Renee Elise Goldsberry) and John (Adam Chanler-Berat) croon the gorgeous duet “Watching the Clouds Roll By” and the ballroom’s curtains rise to reveal a scene of blule skies,roiling clouds, and dancing angels in puffy skirts. Nothing lasts forever and soon the romantic scene in interrupted by goofiness from the Marx Brothers that was so unexpected and well done that the set itself got a round of applause.

The production brought back much of the creative team that did it at the Goodman in 2009. Even there it had a small band, but the arrangements were first rate, as was the set and costumes.

Gail: Musical Director Kris Kukul led the six-piece band, which was placed smack in the center of the stage. They not only did right by all the music, but joined in the fun on several occasions, with David Gardos allowing Chico and Harpo to commandeer his piano more than once.

I was really impressed with Jenny Mannis’ bright and clever costumes. There were a LOT of quick changes going on backstage and every one of them stayed safely fastened during all the hectic physical comedy and dance. Robin Vest’s set had lots of surprises and worked very well at suggesting many locales without actually representing any.

Larry: The cast size seemed right for the production which only once filled the stage with apprentices during a brief dream sequence when the cast was all passed out from some sort of sleep powder…

Gail: …that Harpo was spraying on everyone. Actually, what he was theoretically spraying was a popular brand of insecticide called Flit, which was part of the “gimme a flash” routine earlier on. The product was a ubiquitous household name thanks to a successful ad campaign illustrated by Theodor Seuss Geisel aka Dr. Seuss!

Larry: Overall the director did a superb job of adapting this play for the 21st century and he certainly has a feel for carving each scene out of the shadow of the previous one. I think Animal Crackers shows that a play that is 85 years old can still have a lot to offer modern audiences that are looking for an evening out that combines a bit of theatre history with the sparkle and wit of timeless comedy that never goes stale. They’re offering special ticket deals for families with children, too.

Gail: I am so glad! I think the Marx Brothers, like Dr. Seuss, tap into that central core of silliness and fantasy that we hopefully all retain throughout our lives.