Review: Jayne Atkinson, Treat Williams roar and clash in “The Lion in WInter” 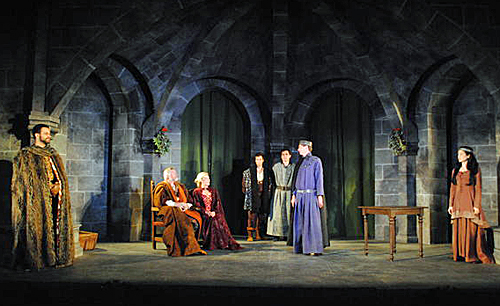 Review: Jayne Atkinson, Treat Williams roar and clash in “The Lion in WInter”

Treat Williams roars like a lion when his sons challenge him, while Jayne Atkinson quietly lies in wait, watching for her opportunity to strike back at the man responsible for her long confinement.

“What family doesn’t have its ups and downs?” asks Eleanor of Aquitaine in THE LION IN WINTER as the royal plots and plans swirl around King Henry’s palace at Chinon, France. It is Christmas, 1183 and she has been allowed out of prison and back across the channel to join Henry, his mistress Alnis Capet and his three sons Richard, John and Geoffrey. Their invited guest, Philip Capet, King of France, has no idea what an eventful holiday he is in for, since much of the deception and game playing also involves him as well.

Treat Williams as King Henry is truly Lord of the Manor as it is his incredibly fast mind that outwits and outsmarts every half baked plan his sons come up with, while the fiery Eleanor is smarter than them all, sometimes even building deniability into her treachery.

Ruling over the Berkshire Theatre Group’s THE LION IN WINTER is Robert Moss, the director. Treat Williams, secure in his role as King, sends the whole family plotting by his indecision over who shall succeed him, though it is Jayne Atkinson as Eleanor who dominates the stage with her charisma, perfect timing and deeply nuanced performance. Treat Williams’ role has him blustering a great deal of the time, the alpha male asserting his dominance, and Williams surely makes the most of it, warding off one challenge after another as they are thrust upon him by his own quarrelsome family. Together the two keep all the leaves in the air for a full two hours, as nobody can agree on which of the three sons should be his successor. All six characters in this play huff and puff, but not one of them can blow his house down.

“I’ve snapped and plotted all my life. There’s no other way to be alive, king, and fifty all at once, ” Henry observes, and at fifty he has lived a very long life indeed. In that far distant past, half a century was more than most people got to live. Henry reached that milestone intact, while others of that age were often in the process of dying, he was still fully alive and functional, a testament to the advantages of being the ruler. Kings back then were among the few able to eat better, stay warmer, and avoid wearing the body out with primitive toil and bouts of starvation. There was always the risk that comes with war, but Henry was known for winning, and not always through war.

Eleanor, was kept in confinement for a decade and a half, and she used her time to think up dozens of plans to foil the King she both loves and loathes, and to gain her freedom. As Jayne Atkinson employs one or another of them you can see the lights come on in her eyes, and share the satisfaction and forbidden pleasures that her cleverness brings her.

She is also a wit. When the youngest and immature of the sons, John (Karl Gregory) interrupts, Atkinson shows she is the master of the zinger: “Hush dear, mother’s fighting.”

What is impressive is how this play uses bogus history as the basis for a highfalutin family feud while gussied up in historic costumes, and trimmed with laugh lines galore. Despite its lack of accuracy it makes one feel quite scholarly nevertheless.

Aaron Costa Ganis (Richard) and Tommy Schrider (Geoffrey) are the more lethal and mature Princes, and on stage they thrash and clash over who most deserves to inherit the throne. They glower, pace and posture with authority and do their part to keep the machinations moving ever forward, as does Matthew Stucky as Philip King of France.

Almost as a sidebar to THE LION IN WINTER there turns out to be a secret gay relationship between Philip and Richard which is, of course, used as one more weapon in the war of words taking place in the palace. (For most of history male on male sex was not that big a deal, in fact it was just another fact of life.)

Tara Franklin as Alais Capet turns in one of her finest performances ever, a fragile combination of seduction and entrapment where King Henry finally gets entangled in his own impossible situation as he decides to marry her instead of honoring an agreement made with the French.

If this cascade of entrapment, vile plots and hidden daggers strikes you as somewhat quaint, Eleanor reminds us that is this is how you spent your time before the current era of texting, television and the printing press. “Well it’s 1183 and we are all barbarians!” she remarks, getting a huge laugh from the audience.

But then Atkinson continues, talking to her sons and getting to the core of the play. ” Oh, my piglets, we are the origins of war: not history’s forces, nor the times, nor justice, nor the lack of it, nor causes, nor religions, nor ideas, nor kinds of government, nor any other thing. We are the killers. We breed wars. We carry it like syphilis inside. Dead bodies rot in field and stream because the living ones are rotten. For the love of God, can’t we love one another just a little; that’s how peace begins. We have so much to love each other for. We have such possibilities, my children. We could change the world.”

All of the action takes place on a highly functional set designed by Brett J. Banakis. The Fitzpatrick Main Stage is a tough place to put cookie cutter sets, since the stage has unwelcome columns and no fly or wing space to speak of. His domed palace room with a ceiling that raises and lowers is marvelous. With the use of various tapestries, kegs and clever lighting (by Solomon Weisbard) it transforms itself from a royal bedroom to the throne room to a wine cellar as needed. The costumes by David Murin lent much to the atmosphere, though I found a couple of the more modern design touches like the hourglass on Eleanor’s dress and Richard’s stitching details a little distracting.

All in all, THE LION IN WINTER is funny, finding much humor in its mock history, and boils down to a love-hate story about some long ago royals. Just don’t compare what is on stage with the historical record. This is theatre, and the whole enterprise is built largely on fiction, spiced up with some fact. Historians never focused on the details that fascinate us today, so to make Henry and Eleanor and the three sons come to life a great deal of supposition must be used.

THE LION IN WINTER – one of my top picks of the summer – is made memorable by its cast of time-traveling actors who have great fun with the story. I suspect that Goldman who wrote the play in 1966 was partially inspired by Edward Albee’s 1962 play Who’s Afraid of Virginia Woolf. That’s likely the inspiration for the bitchiness between the characters. There’s some delightful black comedy as well, perhaps a bit of a parody of the TV series My Three Sons (1960-72) . An unusual combination to be sure, but it works.