Review: Berkshire Theatre Group tinkers with a classic: “Oklahoma!” at the Colonial 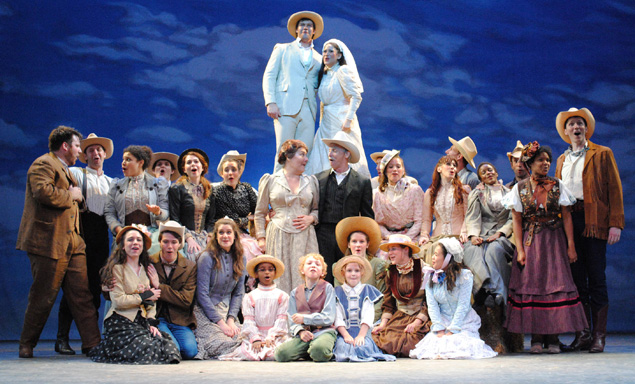 Review: Berkshire Theatre Group tinkers with a classic: “Oklahoma!” at the Colonial

Larry Murray: You know how much I have been hoping that Oklahoma! would be the third hit musical this summer, following On the Town at Barrington Stage and Animal Crackers at Williamstown Theatre Festival. I feel like my souffle had all the perfect ingredients and then just as it comes out of the oven, it collapses.

And I ask myself what the hell happened.

Gail M. Burns: Although I like Oklahoma! I was disappointed way back when the BTG announced it as their summer musical. It just seemed such a safe, uninspired choice.

Larry: Well, let’s do a little bit of detective work and see where things might have gone off track. First the music and lyrics by Richard Rodgers and Oscar Hammerstein II. Oklahoma! is a classic but even at the 1943 opening, the NY Post Critic said the songs were too much alike. And is there any 1940’s song whose lyrics are still the cats pajamas?

Gail: Frankly, that critic was nuts. The score to Oklahoma! is wonderful. All of the songs are instant ear-worms, and the 1940’s was a decade full of great music – both inside the theatre and for its own sake – great songs which we still play and sing today. What about that great Bernstein score for On The Town that we just enjoyed? And none of those songs even made the top ten. Rodgers and Hammerstein hit #1 with “Some Enchanted Evening” from South Pacific in 1949.

Larry: Then there is the book, which to give it credit, worked with the songs themselves to move events forward, but this is still not Chekhov. Much of the humor is the innocent-cornball joke kind of stuff which didn’t seem to get much updating.

Gail: Oklahoma! is based on a flop play entitled Green Grow the Lilacs by native Oklahoman Lynn Riggs. That play incorporated old folk songs, and Theresa Heilbrun, co-director of the Theatre Guild which had originally produced it in 1931, decided it needed an original score, so she approached Rodgers and Lorenz Hart. Hart found the script corny and uninspiring, (and I agree with him), but by that time he was ill and drinking heavily, so Rodgers forged a new collaboration with Hammerstein. Both men had already had great success in musical theatre, so they were able to have quite a bit of creative control over Oklahoma! (including rejecting Heilbrun’s idea that Shirley Temple, barely in her teens, play Laurey and Groucho Marx play Ali Hakim!) but Hammerstein hewed closely to Riggs’ original script, adding only the character of Will Parker and the ending in which Curly is acquitted of Jud’s murder.

Larry: The performers were really working hard, giving their all, and all the major roles were professionally cast. Some performers, like Austin Durant (Jud Fry) we thought did a terrific job. I really liked baritone Jarid Faubel as Curly and the light soprano of Diane Phelan as Laurey which was perfect for a young prairie girl. And the ensemble was pitch perfect in all the choruses. Helping them all sound good was Music Director Steven Freeman and the eleven piece orchestra in the pit.

Gail: The score is the best thing about this show and I think we all have the original Broadway cast or soundtrack recording stuck in our heads, so I was glad the BTG produced a real orchestral sound. I too enjoyed Faubel’s singing, but was really entranced by Matt Gibson as Will Parker. He seemed to me to be a true triple threat – a strong singer, dancer and actor. Sadly he was paired with Chasten Harmon’s loud and antic Ado Annie, who was a real disappointment to me since I love that character and have seen so many sparkling soubrettes shine in it.

One thing I just love about Rodgers and Hammerstein’s shows are their feisty female characters. They had a knack for featuring strong-willed heroines – Laurey Williams, Julie Jordan, Nellie Forbush, Anna Leonownes, Maria von Trapp – and their soubrettes are often equally empowered. Here Laurey is a sassy little spit-fire and Ado Annie rightly questions why men are sexually liberated and women aren’t.

Larry: The sets by Brett J, Banakis were a bit minimal, though, and some of the choices made – like the platforms disguised as fuzzy hay bales – were pretty awful. I was also put off by the smokehouse setup where the stage was 80% masked off and Jud and Curley sang “Poor Jud is Daid” – the setup was really odd. Then after a while, they blocked off the rest of the stage with a velvet curtain and Jud finished the scene in front of it, singing “Lonely Room.” For all its weirdness staging wise, it was the most effective scene in the whole darned show, wasn’t it?

Gail: Thanks to Durant’s fine performance, yes. The theatrical term for a song or scene performed on the apron before the closed curtain is “in one” and it is a device generally used to cover a big set change, but there weren’t any of those at all in this production, so it was an odd choice indeed. I found that director Eric Hill seemed determined to use the scenery, or lack thereof, to remind us that we were in a theatre seeing a show, a Brechtian device that is ill suited to Rodgers and Hammerstein.

Larry: And that scene was followed by the dream sequence, choreographed by Gerry McIntyre which revealed two things, that he had a great respect for Agnes DeMille and that Austin Durant as Jud Fry is a helluva dancer.

Gail: Gibson is the better dancer, but for a big man Durant really knew how to move and was an excellent dance partner to the women. Some of the other men were obviously struggling to do the lifts. In fact, many in the cast were struggling just to dance, which was sad.

Larry: Eric Hill directed and in an early interview he said the production would be lean and contemporary, but didn’t specify just what elements were involved. Certainly it wasn’t the costumes.

Gail: The David Murin’s costumes for Laurey were completely wrong, and always at odds with what the other women on stage were wearing. No orphaned farm girl living alone in Indian Territory with her maiden aunt would have had that large a wardrobe of spotless frilly frocks, which seemed to come from several different eras.

Larry: Continuing our quest for what happened we come back to the book and I think they put the whole show on a diet not by small cuts but rather through shortcuts – not spending time on the small and telling details which uplift and make human each of the characterizations. While there was no shortage of movement from everyone all the time, the gestures and poses seemed more formula than character driven, possibly because people are so inured to constant motion on television. There the camera is always in motion, panning or dollying and subject to constant cross cuts. The effect has conditioned most people’s eye to follow the motion and that is what we had in this show. Yet so little of it meant anything or helped us understand and identify with the people on stage.

Gail: This is an Oklahoma! without its soul.

Larry: Exactly. You just put your finger on the missing ingredient. It’s not enough to sing the songs, dance the dances and recite the lines with energy. The core of all that noise and motion has to be genuine heart and soul.

Gail: Sadly, I think Hammerstein gutted the soul when he decided to change the ending, I have always hated that kangaroo court scene. In the Riggs play Curly’s fate is more ambiguous. Thankfully they have that marvelous title song to fall back on at the end. How can you leave the theatre unhappy after hearing that?