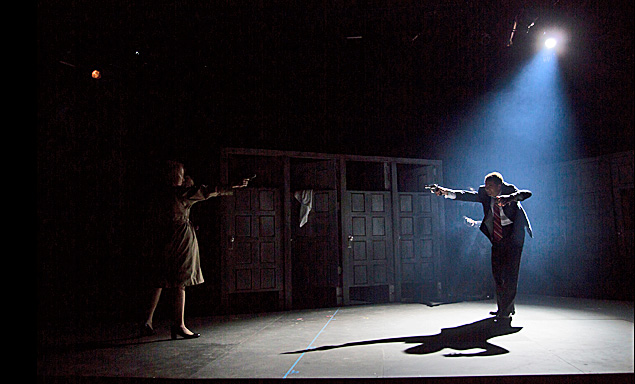 What is Hapgood about? Espionage, international intrigue and physics, yes, but at its heart it is a play about a working woman, a single mother, and how she manages the precarious balance between work and family life. It just so happens that this particular woman, Elizabeth Hapgood (Kate Burton), is a high-level officer in Britain’s MI6, so her work is espionage and international intrigue, and Joseph Kerner (Jake Weber), the father of her son Joe (Adam Langdon), is a Soviet physicist who may, or may not, be working both sides of the fence.

When Hapgood opened in London in 1988, starring Felicity Kendal and former WTF Artistic Director Roger Rees, it was a flop by Stoppardian standards. After a significant re-write, a Broadway staging in 1994 starring Stockard Channing met with more success, and I assume it is that version the WTF is using here, but it is still not Stoppard’s best work. The playwright strives to spoof the spy thriller genre, but gets so bogged down in physics metaphors which then have to be ploddingly explained to the audience in long-winded speeches to which close attention must be paid, especially since in this production Weber delivers them in a thick Russian accent.

I know enough physics to understand the broad realities Stoppard is playing with. Electrons can be in two places at the same time, and light is both a particle and a wave depending on how you look at it. “A double agent is like a trick of light. You get what you interrogate for,” Kerner says. And he is right, not just in physics but in most experimental models – if you set out to prove something or find something that is what you usually end up proving or finding. Here Hapgood and her team are looking in all the wrong places for people and things that may exist in two places at once, or not at all, and they are not very good at it.

In the opening scene, brilliantly staged by director Evan Yionoulis, a parade of young business-suit-clad men bearing briefcases whisk in and out of changing booths in the men’s locker room at a public swimming pool. In a life-sized game of three card monte they each leave a briefcase, take a briefcase, leave a towel, toss a towel. An American CIA agent, Ben Wates (Victor Williams) watches them while pretending to shave, but neither he nor we the audience understand what happens. It all goes awry and the rest of the play is spent watching Hapgood and company try to figure it all out and get things back on track.

The puzzle may or may not be solvable. Knowing Stoppard it is, but that is a topic for dry academic minds, many of whom live in Williamstown. It is very fashionable to pretend to understand Stoppard even if you don’t. Stoppard is a brilliant man, and he knows it, which makes his intellect his greatest asset and his greatest weakness. He likes to show off, and in Hapgood he shows off to the detriment of plot and character.

It was all edgy and women’s libby back in 1988 to have a single mother as the head of a covert government office, but Stoppard is unable to escape from the gender stereotype of the mother/woman and create a believable character. It is possible that he is also spoofing the “women can have it all” myth which was au courant in the 1980’s. Certainly no one, male or female, could behave the way Elizabeth Hapgood does and remain safe, let alone employed, in the espionage business very long.

So this is definitely lesser Stoppard, and a very prickly Stoppard, and yet the double whammy of his name and Kate Burton’s star power have sold this WTF production out. It is a strong production of a flawed play and, typical of WTF productions, it features a fine cast, a fascinating set by Christopher Barreca and Christopher Heilman, and expert lighting by Donald Holder. You may leave the theatre cursing Stoppard’s name, but no one else’s.

Burton plays the title role all British crispness and stiff upper-lip. She is just attractive enough without being too glamorous. You see why the men she works with and who work for her – and they are ALL men – both obey her and admire her. Weber brings a gentle scholarliness to Kerner. I found him easy enough to understand, when I understood the physics he was given to spout, but others complained that his Russian accent was too thick. Certainly his are lines to which you have to pay careful attention – accent or no accent.

Barreca and Heilman’s set is all a dark, matte finish gray, as is the floor of the stage. An army of faceless and efficient young men roll the many sets of doors – I believe there were 15 in all – about as the scenes change. Stoppard’s stage directions about the location of each scene are vague and the settings are various – a locker room, the zoo, Hapgood‘s office, the rugby pitch at Joe’s prep school, a shooting range, a photographer’s studio, a hotel room – so the designers have wisely given only the vaguest visual hints of these locales and allowed the script to flesh out the details.

My one big quibble was the bizarre casting of Langdon as young Joe. The 1988 script identifies him as an eleven year old boy. Langdon is clearly a grown man whose program bio lists his education as the Royal Academy of Dramatic Arts and Juilliard. It is hardly unusual to cast an older actor, old enough to be exempt from child labor laws, in a child’s role, but some attempt could have been made to find an actor who looked like Burton and Weber’s child. While they are both have straight, fair hair, Langdon has a cheerful mop of dark curls atop his head. The scene late in the play when the three of them are on the stage together is visually jarring. Unless Yionoulis wanted us to look at that scene and think “Wait a minute. That boy is not HIS son.” Another puzzle to solve? Or another red herring?