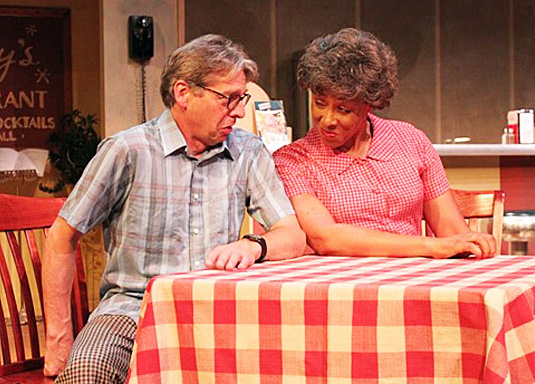 Carleton Carpenter, the composer and lyricist of Northern Boulevard, is 87 years old. A Bennington native and still a Bennington resident, he made his Broadway debut at age 18 and his film debut at 25. He scored a gold record before he was 30. Over the decades Carpenter has found success as a magician, singer, actor, screenwriter, song writer, and mystery novelist. And he has a long and happy association with Oldcastle, which first presented this “new old-fashioned musical” of his as the opening attraction in their new downtown theatre space in December of last year [link].

Northern Boulevard is an unabashedly old-fashioned, sentimental and nostalgic show, and I see nothing wrong with an older writer embracing that style. Carpenter lived the 40 years (1940-1980) covered by Kevin Brofsky’s script, and who better to look back and celebrate them?

I found I enjoyed this iteration of Northern Boulevard even more than what I saw last winter. The show is now shorter by a full half hour with little detriment to the storyline. I was aware of one cut early on that I found slightly jarring, but otherwise the show was tighter, zippier, and more focused than before.

All but two of last year’s cast have reassembled for this outing, once again under the direction of Oldcastle Artistic Director Eric Peterson – Brad Thomason has replaced Gil Brady in the leading role of Jerry Simon, and Brandon Duncan has taken over for Patrick Thomas Spencer as Jerry and Roslyn’s son, Michael, and a few other minor roles. Thomason and Duncan look enough alike to be father and son, and I found Thomason better able to play an aging Jerry than Brady had been.

I was especially pleased to see a stronger and more nuanced performance from Cotton Wright as Roslyn. The story follows Jerry and Roslyn from a few days after their wedding when they buy a deli on Northern Boulevard in Queens, NY, until the day they sell it. Last December I would have described this as Jerry’s story, but this time I felt that it was Roslyn’s. We know so much more about her than we do about him. Her parents, Saul (Richard Howe) and Celia Gelbart (Christine Decker) help them buy the joint and Saul often straps on an apron and works behind the counter. We see Roz run the deli, with his high school sweetheart, Dorothy (Jessica Raaum) while Jerry is off fighting in World War II, and we see her struggle to find herself as an individual after he returns and she stays at home raising their son.

As the title implies, the show is as much about the neighborhood as any of the people who happen to pass through the deli. Brofsky moves the story through history via the fairly shop-worn device of a radio announcement of current events during each scene change, and I was pleased to note that the clues as to what year it was now have been rewritten so they are easier for the average playgoer to quickly grasp. But Brofsky uses a much more clever device to telegraph the changing face of the neighborhood. Jerry and Roz and her parents are Jewish, and so is their Northern Boulevard at the start of the play. The vivacious Cheryl Howard plays their first landlady, the Jewish Mrs. Golden, but she also plays their second landlady, the Irish Mrs. McSherry; and their third, the Italian Mrs. DAngelo; and their fourth, the black Mrs. Washington. We never meet the fifth landlady, Mrs. Hernandez, but she is obviously intended to be Hispanic. Howard herself is black, and it is good pay-back for all those years that whites have “passed” as other ethnicities and races to have a black woman affecting Yiddish, Irish, and Italian accents for a change.

Howe repeats his delightful turn as the curmudgeonly Saul, and Carpenter gives him three excellent duets in which to show his comic range – first one with Decker (who is excellent as the mother-in-law from hell), then a grandfatherly romp with Duncan, and finally a show-stopping eleven o’clock number with Howard.

Raaum also charms again as Dorothy “Dottie” Fisher, the girl Jerry jilts for Roz. It is a bit of a head-scratcher why Jerry chooses the pale, angular, soft-spoken Roz over the bouncy, curvy, ambitious Dottie, but there’s just no explaining some men’s taste. On the other hand the idea of a smart cookie like Dottie remaining smitten with the slightly nerdy and decidedly unambitious Jerry is downright implausible! Raaum belts out the title song and looks delicious in Deborah Peterson’s costumes. If I was Roz, who may be meek but is no dummy, I wouldn’t have let Dottie continue to sashay around my husband for two seconds, let alone five years.

The moveable audience was positioned more cozily with Carl Sprague’s evocatively nostalgic set than previously. And I still wish Oldcastle’s budget would stretch to period costumes and wigs, especially for the women, which would help establish the period quickly and visually. Nothing establishes period more succinctly than clothing.