Review: Trust and deceit meet in “Tryst” at the Chester Theatre Company 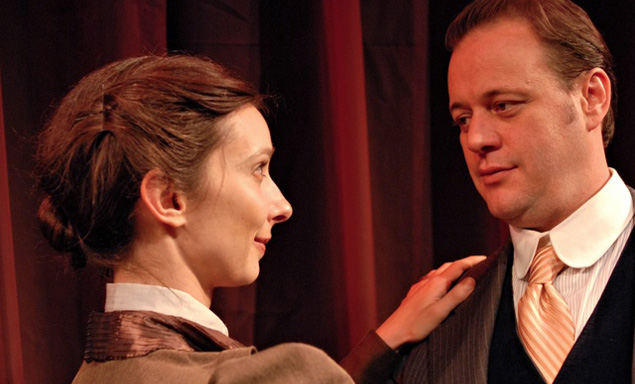 Review: Trust and deceit meet in “Tryst” at the Chester Theatre Company

This ‘twosie’ Tryst in Chester is a Crafty Thriller
Theatre Review by Gail M. Burns

This is what Chester does best and I will coin a new term for it – a “twosie.” Two actors, two acts, two hours. A crisp script, impeccable casting, and high production values. The company often selects plays with a special angle on life or one that keeps you guessing. Karoline Leach’s “Tryst” is a crafty thriller that delivers the goods, and this production – starring Justin Campbell and Allison McLemore under the direction of CTC’s Associate Artistic Director Daniel Elihu Kramer – is a fine example of the “twosie” genre.

Leach is a British author and playwright who has worked as an actor and director. While this play, which began its life in 1997 as “The Mysterious Mr Love,” has been produced worldwide, Leach is best known for “In the Shadow of the Dreamchild,” her biography of Lewis Carroll, author of the “Alice” books. Her debunking of what she terms “The Carroll Myth” has caused a stir in Carrollian scholarship since the book’s publication in 1999.

The advance publicity billed “Tryst” as “Downton Abbey meets Hitchcock” which is a pretty accurate description of the play’s setting and mood. Of the 2006 off-Broadway production, John Simon wrote: “If you crossbred the two Eugenes, O’Neill and Ionesco, you might get something like the fascinating Tryst” which succinctly evokes both the tragic and absurdist undertones of the play. Set in London in the first decade of the 20th century, there is much of the Penny Dreadful – which spawned such characters as Sweeney Tood – about the play. Leach took as her inspiration the true story of one George Joseph Smith (1872-1915), a notorious criminal about whom no more shall be said here.

George (Justin Campbell), who affects the surname of Love, is a professional cad who specializes in preying on lonely spinsters with nice little nest eggs put by. He woos them, weds them, beds them, gets them to put their bank account in his name, and vanishes. Under-employed in a milliner’s shop and still living at home with her parents, Adelaide Pinchin (Allison McLemore) is George’s perfect pigeon. He contrives a meeting and has married her and whisked her (and inheritance of £50 and a pretty little brooch) off to Weston-super-mare for a tawdry wedding night in under a week’s time. What transpires in the 24 hours following their wedding is thrilling and touching in equal terms.

I cannot imagine two more perfect actors for these roles.

Campbell is just handsome enough in a manner that perfectly suits the period. In his three-piece suit and bowler hat he looks like a turn-of-the-century magazine advertisement come to life. McLemore likewise has the perfect blend of prettiness and plainess to be absolutely believable as the desperate Miss Pinchin. Sara Nelson’s costumes for both players are simultaneously handsomely detailed and just shabby enough to place their wearers as solidly middle-class. The leg o’mutton sleeves on McLemore’s outfits would have been slightly old-fashioned even then.

Despite his caddish ways, Campbell makes Mr. Love very appealing, and McLemore is simply charming as his all too willing prey. Leach and Kramer have both characters spin certain webs of lies, or half-truths, until it is not quite clear who is playing who or what the final outcome will be. The final moments of the play are truly shocking and left the matinee audience with whom I attended literally abuzz as the lights dimmed.

I find it fascinating that this play has found success under this second title. The word tryst – meaning an appointed meeting or meeting place for lovers – is close etymologically to the word trust, and is not much in use today in American English. Many people I mentioned the title to assumed I was mispronouncing the French word “Triste” which mean sadness or sorrow. I am sure Leach had this close homonym in mind as well when she retitled this work.

The early scenes of George and Adelaide’s courtship are played in front of a drawn, but semi-transparent, curtain. The curtain is pulled and Christina Todesco’s fine set, representing the couple’s modest “honeymoon suite” where the rest of the action takes place is revealed as they arrive.

Kramer and sound designer Allison Smartt have selected some wonderfully cheerful rinky-tink period music which plays as the audience enters the theatre, setting a completely false expectation for what is to follow.

Leach seems to be a woman very much in her element in the Victorian and Edwardian eras, who subsequently brings a 21st century ethos to a time which, though not very distant, was very different morally from our own. Could a Mr. Love ply his trade successfully today? Sadly, we all know they do.