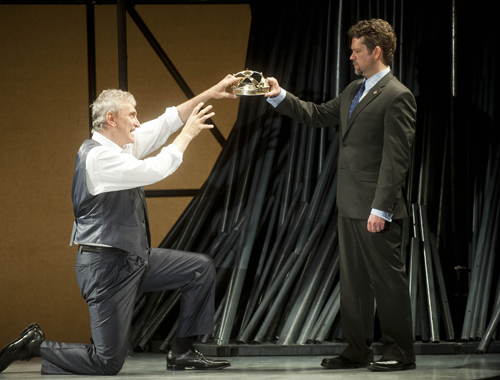 “Richard II” more of a “tell” than a “show” at Shakespeare & Company
Theatre Review by Gail M.Burns

From the moment I cracked the cover to read it in 11th grade, I have loved Richard II. It is beautifully written, but it is also true that it is probably the most political and least theatrical of Shakespeare’s plays. Like so many others, it is very seldom performed amd was absolutely thrilled to see it appear on the 2013 schedule at Shakespeare & Company with one of my favorite actors, Rocco Sisto, in the title role.

Arriving at the Packer Playhouse with nothing but excitement and high hopes, I wanted this production to be wonderful. Unfortunately it is not. In fact it is inexplicably awful, and the blame has to be laid squarely at the feet Director Timothy Douglas who took the amazing artistic resources of Shakespeare & Company and made all the wrong choices.

Richard II is not an easy play. It is more of a “Tell” than a “Show” and the story it is telling is of the treason and intrigue of 1399-1400 as Henry IV usurps the throne from Richard II and the Middle Ages come to a close in Britain. In Shakespeare’s time nearly two hundred years later, the story was considered a political hot potato because Richard II, like the sitting monarch, the post-menopausal Elizabeth I, was childless and there was great concern about how, and to whom, the crown would pass. While Elizabeth I lived, this play was supressed, or performed without the “un-crowning” scene, out of either respect for or fear of the Queen’s reaction.

The problem facing England at the end of Richard II’s reign was the lack of an heir and a sufeit of cousins. Phillipa of Hainault bore King Edward III of England at total of 14 legitimate children – eight sons (Shakespeare mentions only seven), three of whom died in childhood, and six daughters. This produced a whole bunch of cousins from the five surviving sons – inclduing Richard II and Henry IV – all with legitimate claims to the throne. The end result of this philoprogenitiveness was the Wars of the Roses, also known as The Cousins’s War (1455-1485), covered in Shakespeare’s earlier tetralogy of history plays – Henry VI Part 1, Henry VI Part 2, Henry VI Part 3, and Richard III. All leading up to the glorious Tudor Dynasty embodied by Elizabeth I, the Queen upon whose favor Shakespeare’s theatre company depended.

So the relationships in the play are both familial and political, and surnames as we know them today were only just coming into usage in the late Middle Ages, and so each character is called by many names. In the course of Richard II, Henry IV is called Harry Hereford, Henry of Hereford, Henry of Lancaster, the Duke of Hereford, Henry Bolingbroke, and just plain Bolingbroke, the name by which the character is listed in the script. He makes mention of his son Henry, or Hal, the future Henry V. There is another Henry pair in the play – Henry Percy, the Earl of Northumberland, sometimes referred to as just Northumberland and sometimes as just Percy, and his son Harry Percy, also called Harry Hotspur, or just Hotspur.

And those are just four of the characters you need to keep track of. The key job of the director of Richard II is making it easy for the audience to understand what character each actor is playing and how their characters are related. With the exception of the two kings and the three female characters, Douglas makes this nearly impossible. The costumes by Lena Sands are mostly modern dress, so there are no heraldic clues visible, and actors change character without changing costume.

Douglas obviously sees religion as a key element to this play, as there are many crosses and bibles in evidence and the throne is made in the shape of a bishop’s mitre. The recorded music is all 20th century gospel and the performance concludes with the entire cast (except for Richard II, who is dead) “falling on their knees” to the strains of the third verse of the Christmas carol “O Holy Night.” (The only thing I understood less than Douglas’ musical slections was Junghyun Georgia Lee’s set.) Richard II was a pious man and did believe in the Divine Right of Kings, but religion played no real role in the political intrigue of those pre-Reformation times, nor does it in the play.

You can see why it is almost unfair to mention the actors thrust into this morass. Almost all were familiar to me and I know what they are capable of, so its clear that they were directed to shout a lot when they were speaking and to stand stock still and expressionless when they weren’t. Douglas had them making little human contact with each other, let alone with the audience. There was no reason to care who was Northumberland and who was Carlisle, or Surrey or Salisbury or Gloucester or Bushey or Green or Fitzwater…

At the end Sir Philip Exton murders Richard II. The actor, Jake Berger, had played two other characters. When he suddenly became Exton, who Exton was, and how he had figured the events I’d been watching on stage for the past three hours I really couldn’t tell. He was just some guy who suddenly decided to kill the former king. (In reality there is no proof that Richard II was murdered.)

Sisto has been directed to glower – his eyebrows lowered almost to the point of concealing his eyes – and bellow until just before intermission, when Douglas relents and lets him speak Richard’s wonderful speech in Act III, scene ii with poetic clarity and a bit of humor. This is a turning point for the character, after which his speech becomes more and more poetic, until by the end Sisto is sitting barefoot on a chair, wearing a gi, delivering a sweetly gentle redition of the dungeon speech in Act V, scene v. But those moments of poetic beauty are too little, too late.

Douglas does not give us a clear hero to root for. Richard is cold, arrogant and pompous, and Bolingbroke/Henry is ambitious and coniving. Both have moments of compassion and humanity, but for many in the audience the verse alone is stumbling block enough to connecting with these two protagonists.

Tom O’Keefe, who plays Bolingbroke/Henry is one of the most lively and interesting people on the stage but he looks much younger. Now in his late fifties with silver hair, Sisto may be too old for this role, because Richard and Henry need to be peers if the tale of usurpation is going to have any weight. As Douglas has cast it we see a younger man defeating an older man, which is the way of the world, not necessarily the stuff of drama.

Sisto, O’Keefe, Walton Wilson as the Duke of York, Johnny Lee Davenport as Northumberland, and Wolfe Coleman as Aumerle, are the only actors who play just one character throughout – and to show you how confusing it all was I could have sworn that Davenport played multiple roles. Even the excellent Jonathan Croy doubles as both John of Gaunt, in which role he gets to speak the wonderful “Sceptered Isle” speech, and the first Gardener. Coleman brings sympathy and interest to his role, another one of Richard and Henry’s endless cousins, and has done a fine job as the fight coordinator. I will be pleased when this young actor gets to move on from minor parts to the majors.

Elizabeth Ingram and Kristin Wold as the Lords of Fitzawater and Ross, are subsumed into the silent standing crowd in early scenes, saddled with the ugliest costumes and clunkiest pocket-books immaginable. Rachel Leslie gets a flattering white pants suit as Richard’s Queen. In reality he was married to his second wife, who was still a child, at this point in his life, but Shakespeare is clearly depicting his first and very happy marriage in the play. Leslie is allowed to create a sympathic character here, and then later is a bendle of energy as she makes it clear how Harry Hospur earned his nickname.

Ingram and Wold get better costumes and much better lines as The Duchess of Gloucester and the Duchess of York respectively. Ingram’s turn as the mourning widow of Gloucester is instrumental in turning the political tide towards Henry early in the play. And Wold joins O’Keefe, Coleman, and Wilson in the one comic scene in the play, which falls awkwardly just before Exton’s sudden decision to commit regicide and Richard’s last soliloquy. That gaff is completely Shakespeare’s fault and the company just makes the best of it.

My great fear is that this combination of a little known play, written mostly in verse and dense with historic details from a distant time, and an inscrutible production will scare audiences away from the rest of the history cycle known as the Henriad, which Richard II launches for the company (presumably Henry IV Part 1, Henry IV Part 2, and Henry V, all of which have clowns, will be presented in 2014, 2015 & 2016) and that would be a far greater tragedy that one poor production. Be not afraid, the other three plays in the cycle have clowns in them!