Review: “The Chosen” a work of profound beauty at Barrington Stage Company 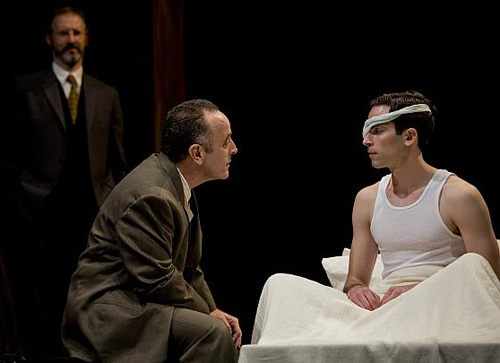 Review: “The Chosen” a work of profound beauty at Barrington Stage Company

“The Chosen” is more than a story about family and friendship
Theatre Review by Gail M. Burns

About three-quarters of the way through the opening night performance of The Chosen I became mesmerized by the profound beauty of what I was seeing and hearing. This adaptation of Chaim Potok’s 1967 novel by Aaron Posner, who also directs, is a marvel of theatrical perfection. The acting of the five man cast, Posner’s script and direction, the perfect set by Meghan Raham (who has also done the effective costumes), meticulously lit by Tyler Micoleau, blends into a whole so engaging that you do not want the performance to end.

Set in Williamsburg, Brooklyn between 1944 and 1948, The Chosen follows two young men from the day they meet at age 15, playing on opposite sides in a baseball game, until they are almost through college and set on their career paths at age 21. The whole is narrated by Reuven’s adult self (Richard Topol). Young Reuven Malter (Jeff Cuttler) is an Orthodox Jew, living alone with his widowed father, David (Adam Heller), who is a Talmudic scholar. Daniel “Danny” Saunders (Ben Rosenbach) is the eldest son of an Hasidic Rabbi (Richard Schiff), who is a Tzaddik, an Hasidic leader who is also a righteous and saintly person by Jewish religious standards.

Just as Roman Catholics do not view Protestants as Christians, Hasids do not view non-Hasidic Jews as true Jews, referring to them as “apikorsim,” a Yiddish word meaning unholy and unclean. When Reuven and Danny meet they are playing on opposing baseball teams – Hasids versus Orthodox Jews – and they view each other as natural enemies on and off the field. But an accident during the game changes their lives forever and brings them together as friends.

Danny needs his father’s permission to have Reuven for a friend, and over time he and the Rabbi make a connection studying the Talmud at the Saunders home, even though Reb Saunders disapproves strongly of David Mater’s Talmudic writings, and later even more strongly of his support for Zionism and the formation of Israel. (The Talmud is the central text of Rabbinic Judaism and the source of all Rabbinic Law. It contains the opinions of thousands of rabbis on a variety of subjects, and runs over 6,200 pages long, which explains that multiplicity of enormous books on the set.)

Both boys are very intelligent and studious. Tzaddik is an hereditary position, the firstborn sons in the Saunders family have been Tzaddik for six generations, and Danny is expected to succeed his father. Reuven has an aptitude for mathematics and his father wants him to go for his doctorate and become a professor. It quickly becomes apparent that what their fathers want and what the boys feel called by G-d to do are two different things.

These words, written in Hebrew, are illuminated across the top of the set. “More than one thing can be true at a time,” Posner writes. The fathers’ opposing viewpoints are true. The boys’ callings are true, despite being different from their fathers’ ambitions for them. “Both these and these are the word of the living G-d.” But how hard is it for humankind to accept this dual truth?

In 2011 Barrington Stage mounted a fine production of Posner’s adaptation of Potok’s 1972 novel My Name is Asher Lev which was a critical and commercial success on their smaller St. Germain Stage. (Actually, “adaptation” is the wrong word. Potok and Posner have collaborated on these stage versions, and that teamwork shows.) Like The Chosen, …Asher Lev is a coming of age story focusing on the conflict on Hasidic boy faces between the traditions of his faith and his calling as a painter. Both plays tell stories of families of strong faith who love and respect each other, which is such a welcome change from all the angry, dysfunctional family drama that litters the stage these days. At one point in The Chosen Reb Saunders is distressed to learn that his son has been reading forbidden secular books by the likes of Fyodor Doestoevsky, Ernest Hemingway, and Sigmund Freud. Granted, this is the 1940’s, but even back then many families would have gladly traded their teenaged sons’ predilictions for a fondness for the Public Library and its contents.

Posner and his excellent cast make you care deeply about these people, even if they inhabit a world very different from your own. Posner and Potok have done a fine job of giving enough background information on these two branches of Judaism and the Hebrew and Yiddish words sprinkled throughout the script that even this shiksa could keep up. Ultimately, this is a play about the universals of family, faith, and friendship which we all embrace.

During the years covered in The Chosen World War II comes to an end, the United Nations is created, Franklin D. Roosevelt and Adolph Hitler pass away, the world at large becomes cognizant of the enormity and horrors of the Holocaust, and Israel becomes a nation. These international events have a profound impact on the characters and plot of the play, but sadly the lessons learned have not put an end to genocides or ensured more open discourse and greater understanding. As Posner wrote in his foreword to the acting edition of the play:

“Conflicts between people across boundaries (religious, racial, political, etc.) only seem to be growing more heated, complex, and irretractable. At the same time, social discourse seems to be growing more polarized and less based on a desire to truly engage or even understand those we disagree with. In this world, [Potok’s] story seems more vitally necesary than ever.” – Aaron Posner