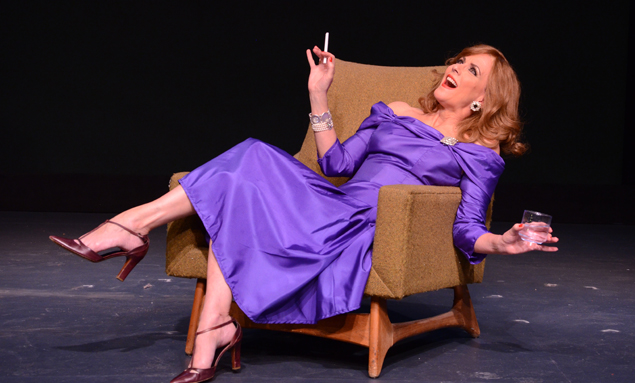 Tallulah Bankhead made her last film, “Die! Die! My Darling!,” in 1965. By then, the actress, more celebrated for her flamboyant personality and uncensored proclamations about her sexual appetite than for her artistry, suffered from the effects of decades of smoking (reportedly 150 cigarettes daily), drinking, and reliance on cocaine, among other drugs. She died in 1968 at the age of 66.

Playwright Matthew Lombardo was inspired to write “Looped” by an event that occurred during the production of Bankhead’s final screen appearance. Because of a technical snafu, the actress was summoned to loop (re-record) one line of dialogue. The star showed up at the L.A. recording studio drunk and drug-addled, and unable–or unwilling–to retain the line. And so she held hostage the frustrated technicians as they descended into eight hours of Tallulah land.

At Stageworks/Hudson, July 10-28, 2013, “Looped” opens as film editor Danny Miller (Michael Rhodes) seems ready to implode in frustration as he awaits the arrival of the hours-late Bankhead. Sound technician Steve (Steven Austin Young), a level up in the sound booth, takes everything in stride. He is on the clock, after all. Eventually Bankhead (Colleen Zenk) makes her grand entrance, a little wobbly in her black stilettos. She languorously unbuttons an elegant fur coat to reveal a spectacular royal purple dress.

Laura Margolis’s direction is at once elegant and tight, precisely reflecting the individuality of each character and spurring the action at a steady clip.

Young’s performance as Steve is spot-on. Rhodes captured my interest. His frustration was palpable. By the climactic scene, however, his poignant revelations lacked a certain depth and truth. I don’t think this can be blamed entirely on the actor.

Colleen Zink is a gorgeous woman, feisty and energetic, reminiscent of Kathleen Turner in her prime. Her Tallulah drinks continuously and snorts cocaine and declares herself “…too old, too tired.” She discusses her emphysema and pronounces herself “six months away from death.” Yet Zenk remains lucid and vital from beginning to end. Bankhead’s vices took a toll on her beauty, but there is nothing in Zink’s performance, vocally, physically, or otherwise to even hint at dissipation. Consequently, when we must grasp the depth of her wounds to comprehend, and more importantly, to feel her drive to extract a confession from Danny, to relate to him as one wounded soul to another, we are left at sea. Perhaps this impeded Rhodes’s ability to fully develop Danny. Without Tallulah’s vulnerability, it’s just too hard to believe Danny would expose himself in kind.

Still, there is much to enjoy in the production, not the least of which are the quotations directly lifted from Tallulah Bankhead herself. What a dame!