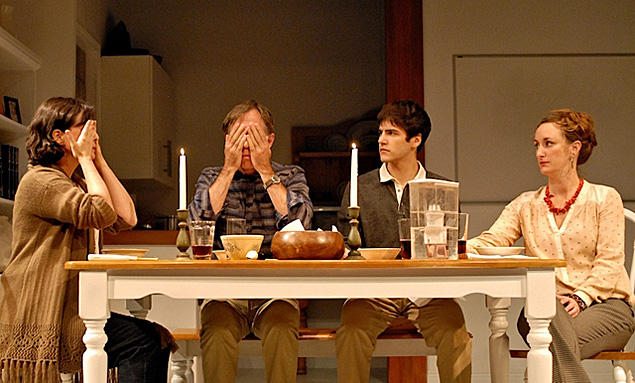 Playwright Annie Baker proves that she has been keenly aware of the voices and circumstances of her formative years in Body Awareness, her first work to be professionally presented back in 2008. Since then Baker has gone on to write several more successful plays, including Circle Mirror Transformation, Aliens, and The Flick, all of which have won Baker Obie Awards for Playwriting. But here this Amherst native is writing with gentle irony of a week in the life of one little uncoventional family in a New England college town.

Its Body Awareness Week at fictional Shirley State College in the fictional crunchy granola town of Shirley, Vermont. It was Eating Disorder Awareness Week, but they changed it to Body Awareness Week because it sounded more “inclusive,” according to Phyllis (Caitlin McDonough-Thayer), the psychology professor in charge of the event. She has booked dance troupes from Thailand and a husband and wife musical duo who cover everything from Klezmer to Gospel…and there is an exhibit of photographs by Frank Bonitatibus (Bruce McKenzie), who is staying a the home Phyllis shares with her partner, Joyce (Jennifer Rohn), and Jared (David Rosenblatt), Joyce’s son from a previous (heterosexual) marriage.

When it turns out that Frank’s photographs are of naked women and girls, all of whom pose for him for free of their own volition, (or with parental approval) Phyllis goes ballistic. It doesn’t help that there is obvious chemistry between Frank and Joyce, or that Joyce, feeling pressued to strike out independently of Phyllis, agrees to pose for Frank.

Meanwhile the women are having a hard time convincing 21-year-old Jared that he most likely has Asperger’s Syndrome and should seek therapy. He has shrugged off college, perferring to fancy himself an autodidact, and is working at MacDonald’s while dreaming of becoming a Lexicographer and writing for the OED (Oxford English Dictionary). Joyce encourages Frank to have a man-to-man discussion with him Jared about women and sex, with disasterous results.

Baker’s home town of Amherst, Massachusetts, boasts not one but three institutions of higher education – Amherst, Hampshire, and Umass Amherst – and her mother is a psychology professor, now on the faculty of Keene State College in Keene, New Hampshire. Her mother is also a contributor to the book “Asperger’s Syndrome: Intervening in Schools, Clinics, and Communities” which, unless I am greatly mistaken, is used as a prop in this production.

You can clearly hear the voice of the teenaged townie Baker was as Jared speaks with distain of what he has observed of college life. You can hear the voice of Baker’s mother in both the politically correct academician, Phyllis, and the sweetly submissive, uber-feminine earth mother, Joyce. And take it from me, a 30-year-resident of a New England college town, her gently sarcastic portrait of Shirley and Shirley State are spot on.

Chester Theatre Company, which sits on Rt. 20 halfway between Pittsfield and Springfield, draws its audience from the Amherst/Five College/Pioneer Valley area as well as from the Berkshires. It is the perfect intimate venue for this fine production, directed by Knud Adams. He has assembled a heart-breakingly perfect cast who bring these quirky characters warmly to life on Travis A. George’s beautiful all white set, neatly framed, and reframed, in blonde wood. You can smell Joyce’s “winter soup” simmering on the stove.

McDonough-Thayer is all political correctness as the angular and childless Phyllis, while Rohn is softly rounded and gentle as Joyce. Rosenblatt does a nice job of presenting Jared’s idiocyncracies/syndrome while embodying the humor and humanity with which Baker has embued this young man.

I think McKenzie just missed the mark on Frank, there needed to be a tad more masculinity and chutzpah for the role to work. McKenzie looks the epitome of a weathered Vermonter, when his character is supposed to be the outsider who disrupts the family’s precarious rhythms.

The themes of Body Awareness and ownership are subtly interwoven into the human story. Baker gets to poke fun at the PC aspects of the term during Phyllis’ introductions to each day’s events for the students and faculty, while through Joyce and Jared’s stories illuminating the human struggle to accept, own, and love our physical selves in a world that judges and a society that insists on a virtually impossible separation of body and mind/soul. Jared’s fledgingly efforts at owning his sexuality are disasterous, yes, but it is Baker helps us know him so well that it is easy to empathize and understand how, in his case, what might be perceived as an act of aggression is actually one of fear and an attempt to bridge the gulf between desire and communication.

My only quibble, and it is a very minor one, is with the costumes, I understand that time constraints made many costume changes impractical, but I didn’t quite get why Joyce changed jackets three times while Phyllis wore the same outfit all week. Also, it did look very odd when they climbed into bed in their street clothes. Surely long flannel nighties (which would cleverly conceal other costumes) would be appropriate sleep wear for two Vermont dwelling lesbian educators? Over all, costume designer Heather Crocker Aulenback did much better by the men and Rohn than she did by McDonough-Thayer.

Chester Theatre Company is on a roll with this quirky audience-pleaser following their blood-chilling production of Tryst and a week of mid-season special events. I understand Body Awareness has already had sold out performances. This trip I also had a chance to check out Wild Thyme, the new restaurant at 30 Main Street in Chester, which offers a tasty, adventurous, and reasonably priced menu with vegetarian and gluten free selections, many of which were easily made vegan for my companion.