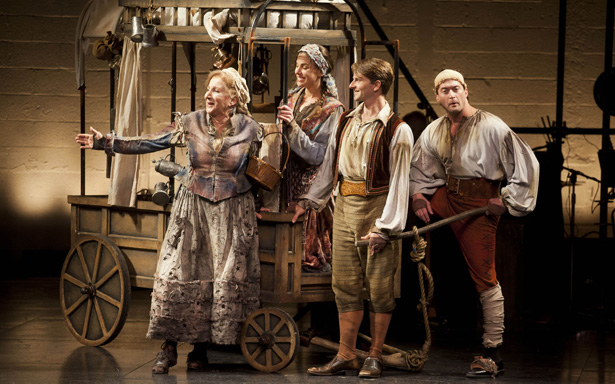 Olympia Dukakis in “Mother Courage and Her Children” at Shakespeare & Company
Theatre Review and Discussion by Gail M. Burns and Larry Murray

Larry Murray: I think we saw something very special last night as Olympia Dukakis donned the role of a lifetime in Mother Courage and Her Children. And not just her, but Shakespeare & Company’s cadre of superb actors, all of whom delivered strong and searing performances. What’s your first reaction?

Gail Burns: This is Dukakis’ fifth, and possibly last, time in this iconic role. It suits her very well, in fact it was her idea to tackle it one more time at age 82. And Shakespeare & Company Artistic Director Tony Simotes was wise to take her up on the suggestion. Brecht is classic 20th century theatre and, although not as marketable as the Bard, his work is just as universal and insightful.

Larry: Mother Courage is often referred to as “epic” theatre, and it is certainly different from anything else you see on stage from that period. It has a style and language all its own. I loved the placards projected over the beginning of each scene.

Gail: Brecht is synonymous with the Epic Theatre style of the mid-20th century, which was a reaction against the Naturalistic style of Constantin Stanislavsky. Every effort is made to remind the audience that they are in a theatre, watching actors on a stage. The projected placards literally tell you what is going to happen in each scene before you see it, so you are not distracted by figuring out the plot or tempted to empathize with the characters. Everything is revealed in advance.

Larry: Dukakis was nothing less than astounding in her performance. Over the long two plus hours of the play she was always on stage, and rarely did a page of script go by without her having a line, a speech, a monologue to deliver. I am awed at her ability to remember so much at 82, not to mention climbing, strutting and reigning over a stage full of people constantly on the move. It was a full-throated performance, too, the kind she excels at.

Gail: The role is a perfect fit for Dukakis, who is in real life and on stage a strong and determined woman. She most recently played the part at the Williamstown Theatre Festival in 1989, when she was 58, with her real life husband Louis Zorich as the Cook and their daughter Christine as Kattrin. Then she was the ideal age for the role, while some would argue that now she is too old, but she used her age to great advantage here and there was no sign of weakness about her. She knows the role well enough to have penned the introduction to the Penguin Classics edition of the play, in a translation by Ralph Manheim and John Willett, which is on sale at the gift shop in the lobby.

Larry: I noticed some empty seats after intermission so I wonder if Bertolt Brecht may still be too innovative for some, even though it was written in 1939, one of nine plays he wrote as Fascism and Nazism were on the rise in Europe and WWII was raging. He apparently wrote it in what writers call “white heat” – in a little more than four or five weeks. And most people don’t know that Margarete Steffin made substantial contributions to the text as well.

Gail: Over the past few decades several women have been revealed as Brecht’s alleged collaborators or even ghost writers. I haven’t kept up with my Brechtian studies enough to comment substantially, but it does appear that Steffin was involved with the creation of Mother Courage…

There is also source material for the play. It is based on a short 17th century German novel by Hans Jakob Christoffel von Grimmelshausen (1621–1676) called Lebensbeschreibung der Ertzbetrügerin und Landstörtzerin Courasche, which is variously translated as The Runagate Courage, The Life of Courage: The Notorious Thief, Whore and Vagabond and Courage, The Vindictive Tramp. Grimmelshausen was kidnapped and forced to fight in the Thirty Years War, hence the setting for Brecht’s play.

Larry: Exactly. Mother Courage is set in 12 scenes covering a dozen years (1624 to 1636) of the Thirty Years War, so the story on stage is able to truly encompass the development of the character of Mother Courage and her family. It is Brooke Parks who had the toughest job, that of playing the mute daughter Kattrin, using all manner of Grotowski-esque physicality and guttural sounds to convey her thoughts to us. In the final scenes, her banging on a drum signals not only the main message of the play, but also its impending finish. She sets a strong example of virtue for us to follow as opposed to Mother Courage who profits from the war and ends up losing all her children. Have I given too much away?

Gail: Brecht was obsessed with making Mother Courage an unsympathetic character, but he never succeeded despite a couple of rewrites to that end. Anna Fierling, for that is the real name of “Mother Courage,” comes across as a strong, though imperfect woman, who does what she has to do to get by. Her efforts at saving herself are far more successful than her efforts at saving her children, but while her choices may be harsh, they are also understandable.

Larry: Her two sons are studies in opposites, the strong Eilif (Josh Aaron McCabe) who is lured into the army and finds himself suited to a life of war and mayhem and the more innocent and foolish son called Swiss Cheese (Ryan Winkles) who is both loyal to his mother and gullible.

Gail: It is Eilif’s machismo that makes him a hero in war and a villian in peace, and Swiss Cheese’s trusting naiveté that spells his downfall. Kattrin is safe as long as she keeps quiet, but as soon as she finds her voice, via the drum, her doom is sealed. McCabe and Parks both gave affecting performances. I found myself less attached to Winkles characterization, but since Epic Theatre is supposed to discourage such an attachment, perhaps Winkles gave the most Brechtian performance of the three.

Larry: While Dukakis has enough star power to light up the town of Lenox on her own, on stage she is simply a member of an ensemble, and it had plenty of strong players starting with her own brother, Apollo Dukakis as the Protestant Chaplin. His role is no easy one, he must change personalities as the war dictates, donning and casting off his ministerial garb as the war turns from the Catholic side to the Protestant, and back again. For a few moments I thought the current Bible could do with a Book of Brecht to follow all the other chapters in order to show how that great book is constantly(and sadly) used to justify war, inequality and human suffering.

Gail: Apollo Dukakis has a fine song about the Passion of Christ late in the show, which really brought home the tragedy and pathos of that much-told story. As Pope Francis is reminding the world lately, there is a wide gulf between the Church and the scriptures. We saw that too in The Chosen where the Talmudic scholars debate Rabbinic Law rather than the Torah or Tanakh. Brecht brings us back to the basics of all world religions – compassion, forgiveness, and justice.

Larry: John Douglas Thompson is one of the great actors of his generation, and he delivers a blow-out performance as the Cook, and one of the few people in Mother Courage’s life that she is pleased to see.

Gail: Thompson was a fine match for Dukakis. Of course in this production it was a little tricky to make much of the realtionship between Courage and the Chaplin because the actors are siblings, so the rivalry between Apollo Dukakis and Thompson fell a little flat, but I loved the backstory of the Cook, aka “Peter Piper,” and the whore Yvette Pottier, who was broadly played in white-face by Paula Langton. True to the Epic form, the audience is informed of the Cook’s identity long before the other characters figure it out.

Larry: Langton evoked both laughs and applause in her characterization, a masterpiece of outrageousness and flippant non-subtlety. I love the way Brecht uses humor to trick you into liking a character, and connecting with them, only to watch their downfall later in the play. Once you laugh with someone, you form a connection, and its undoing down the road evokes the same disappointment you might experience in real life.

Gail: If you look at the overall structure of the play, the early scenes are full of laughs, while the ending is deeply tragic. Brecht lures you in with humor.

Larry: Taking place on a bare pipes stage, lots of “up” lighting effects to cast strong shadows, some white sheets, a few props and the Canteen Wagon of Mother Courage the audience has to envision everything else.

Gail: Brecht wrote: “It is most important that one of the main features of the ordinary theatre should be excluded from [epic theatre]: the engendering of illusion.” (Brecht on Theatre, translated by John Willett). The harsh white lighting and white back-drop are typical Brechtian devices.

Larry: Likewise, Brecht used songs to interrupt the action of his plays, and insisted in the musicians being in full view of the audience – a tactic that we still think of as fairly revolutionary in the theatre. Here, a few musicians, many of them also members of the cast, are upstage, partially hidden to accompany half a dozen songs that dot the show. Dukakis mostly talked her way through her “Song of Great Capitulation”.

Gail: For me the score, by Sound Designer Scott Killian, was the weakest part of this production. The composer most strongly connected with Brecht is Kurt Weill, but it was Paul Dessau who did the original score for Mother Courage, and most of that music is lost. Weill was a genius, and Killian’s score is sadly derivative. I would much rather have heard the best of Scott Killian that a pale imitation of Kurt Weill.

It was especially hard for me when Thompson and Dukakis were singing “The Solomon Song,” which Weill did set for The Threepenny Opera. I kept hearing the hurdy-gurdy rhythm that underlies his version. But that song did give Thompson a chance to show off his pipes, which I enjoyed. Killian’s music was largely atonal and the words were often in a different meter from the music, so most of the songs were intended to be spoken rather than sung in the conventional manner.

Larry: With some eleven English versions of Mother Courage that I know of, Shakespeare & Company chose the 1955 Eric Bentley translation which is likely as close to Brecht’s original that you can get, if not the most theatrical.

Gail: Bentley actually did a second translation for the National Theatre in London in 1965, with Pulitzer Prize winner W.H. Auden as his song translator. Another Pulitzer winner, Tony Kushner, did an adaptation for the New York Public Theatre production in 2006 starring Meryl Streep and with a score by Jeanine Tesori.

Larry: Regardless of the translation specifics, the story of Mother Courage and her Children has become a timeless theatrical and philosophical touchstone on the subject of war. Brecht himself explains exactly why we theatre-goers find it a fascinating work for the stage.

“What is a performance of Mother Courage and Her Children primarily intended to show? That in wartime the big profits are not made by little people. That war, which is a continuation of business by other means, makes human virtues fatal even to their possessors. That no sacrifice is too great for the struggle against war.” – Bertolt Brecht