“Moment of Impact” from Strong Coffee Company at the Berkshire Fringe, reviewed 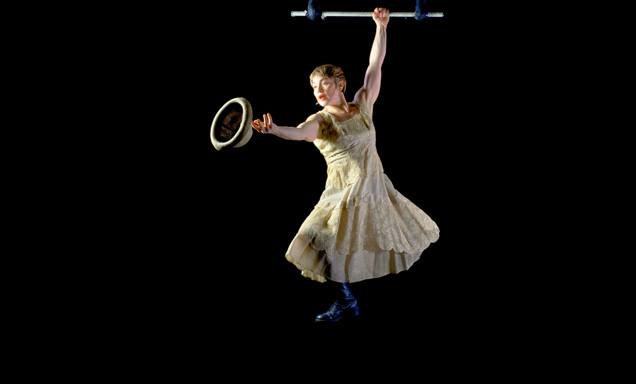 “Moment of Impact” from Strong Coffee Company at the Berkshire Fringe, reviewed

A Moving “Moment of Impact” at the Berkshire Fringe
Theatre Review by Gail M. Burns

“Moment of Impact is a story of a woman’s journey on a train, and a journey through life. This highly personal story explores self, life, death, and the amazing resiliency of the human spirit. [It] combines theatre, dance, and aerial acrobatics to create an original, humorous, moving, and thought-provoking one-woman show.” – Program note for Moment of Impact

While a little bland and formulaic, the paragraph above gives a succinct precise of Bronwyn Sims‘ pithy presentation, except it leaves out the Ibsen. And you have to admire an artist who can cover life, death, train travel, aerial acrobatics, and Ibsen in under an hour.

There is nothing bland or formulaic about Moment of Impact though. Conceived in 2011 and 2012 during residencies at the Celebration Barn Theater in South Paris, Maine, this piece, under the title Lean Back, has had work-in-progress showings at Westover School and Franklin Pierce University. And for Sims and her Strong Coffee Stage company it is still in malleable form.

Sims sums up her inspiration thusly in an excerpt from a recent interview: “In 2009…on my way to Yale to do aerial work for the Rep, a boy jumped in front of the train I was on, and committed suicide. The entire day things were resonating in my head about this boy. The fact that I was going to Yale to teach an actor how to fall for their death in a harness [in a production on Henrik Ibsen’s The Master Builder]…[I] wanted to explore the idea of blending aerial work into a piece of theatre. I wanted to tell the story physically as well as through narrative…It brings up a lot of personal thoughts and things about life. There’s a lot of vulnerability that comes up. The work is really all about stepping into the unknown.”

Sims also weaves in the story of a car crash which made a physical and emotional impact on her own life, leaving her with scars and an apreciation of how fragile and brief life is.

From the moment she steps into the theatre, it is apparent what a strong woman Sims is. She is muscular and in complete control of her movements. She uses her body to convey the movement of the train, the physical impact of the train hittting the suicide, of the passengers reacting to the sudden stop. The set consists of two saw-horse benches and a rope ladder that forms traintracks on the floor and then leaves the ground and arches all the way to the lighting grid in the ceiling of the thetatre. About two-thirds of the way into the show Sims ascends this ladder and performs a silent aerial ballet of great power, which leaves a trail of sweat down her spine.

She has an old plastic suitcase full of hand props, which she uses for a delightfully enacted synposis of The Master Builder in which Halvard is represented by a pair of compasses, his weepy wife Aline by a bok of tissues, and his sometime mistress Hilde Wangel by a hairbrush. Sims also reads excerpts from reams of transcripts of interviews with Amtrak engineers who describe in clinical detail the regularity with which their trains strike people, and the physical differences between accidental victims and suicides. The company gives them three days off, during which they move through a greiving routine before getting back in the engine house.

The show runs 50 minutes with no intermission and there are no wasted words or actions in this thoughtful exploration of the moments that impact our lives. As mentioned earlier, Sims and company still see this as a work in progress, but I wonder what could be added, or pared away, to improve this structure. It made all its points with power and humor and made an impact in all the right ways.