On its way to being a hit: The Bridges of Madison County at WIlliamstown Theatre Festival 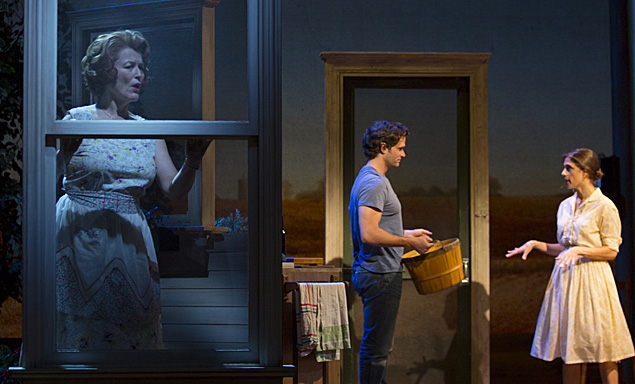 On its way to being a hit: The Bridges of Madison County at WIlliamstown Theatre Festival

The Bridges of Madison County has all the ingredients to make it a big hit on Broadway, but the show itself, now playing at the Williamstown Theatre Festival in the Berkshires of Massachusetts is not quite there yet. It’s too long, and does not have a show-stopper song, something many consider essential to a real hit. The production is directed by Bartlett Sher (Tony-winner for the recent revival of South Pacific). Kelli O’Hara who is currently expecting her second child, will assume the lead role of Francesca (played in Williamstown by Elena Shaddow) for the Broadway transfer.

The new musical has a lush and romantic score by Tony-award winner Jason Robert Brown and a book by Marsha Norman whose Pulitzer winning ‘night, Mother shows she knows her way around families and human emotions. Bridges has lots of them, especially during the final thirty minutes which are so sob-inducing there should be a couple of kleenex tucked into each program.

Brown is among a small number of serious new musical composers who create scores that are beautiful to hear rather than simply strident and bombastic, a trend infesting many new musicals. Nice melodies and gorgeous arrangements, it’s an approach that I endorse, and it seems to be evolving nicely as Bridges clearly demonstrates. One identifying feature is that its songs actually require some real singing. In fact it has to be of near-classical proportions (think Adam Guettel and Light in the Piazza) by actors who portray their characters as solidly as they hit their notes.

And serious music requires serious words as well. Happily this new show has both.

The words crafted by Marsha Norman for its dramatic scenes bring any musical “high art” worries back down to earth with simple and straightforward language that tells the story of Francesca, a transposed Italian woman who married an American GI and is raising their family in Winterset, Iowa.

The performance begins by establishing the wide open spaces of the Iowa countryside with Francesca appearing as a small and diminutive presence singing “To Build A Home” as bits and pieces of her farm fly in from above and the wings. Soon we are in her kitchen, the children and husband running around, getting ready for a trip.

Other than a hard to understand accent in that first song, Elena Shaddow as Francesca is just about perfect, tending to her family’s needs, tamping down squabbles, all organization and diplomacy in the midst of a family that takes her for granted. Once they have gone, it doesn’t take long for a stranger, Robert, who is a photographer for the National Geographic to end up in her driveway, seeking directions. From this first moment Steven Pasquale makes a good impression as a professional with excellent manners. He sings, “Temporarily Lost” and Francesca’s trust is won. He is invited into the house.

Of course there are nosy neighbors, so we soon meet the delightful Cass Morgan as Marge and Daniel Jenkins as Bud, as they share a pair of binoculars to keep tabs on Francesca and the stranger. As the romance between the lone housewife and the young visitor begins to take root, husband Charlie calls home to make sure everything is ok. By the end of the act the couple, now giving in to temptation, sing the lovely “Falling Into You.”

Act Two opens at the State Fair with dad and the kids, doing the usual things that teens and dads do, arguing and fighting while looking for a hot date to make out with. Set against the kids trying to do it is mom doing it with her new lover, the photographer in a bed that almost floats on the stage, stars twinkling in the background. The strings soar, the music crescendoes, love is consummated. But what next. Well, Bob the photographer ends up delaying his return to New York for four days, and so the affair deepens and Francesca has her own desires reawakened, hopes and dreams that have little to do with her family. Of course by mid-Act Two Dad and the kids return, and she has to – as in the film – make a choice. We all know what that is.

The payoff for the show arrives in the last 20-30 minutes when some universal themes of family bonds, death and the significance of memory come into play. During this segment a nearby member of the audience must have gone through three or four little eye-dabbing tissues as this emotion-tinged musical ratcheted up the ante with all the usual devices. By the time Robert got to sing “It All Fades Away” I was on the verge of tears myself. Ah, the power of love.

As the curtain came down on yet another heartfelt expression of “Always Better” by Shaddow and Pasquale, I was about at my limit for sitting still for what turned out to be three hours. The movie itself ran a long two and a quarter hours. The book is not nearly as heavy. On the one hand it might be said that a true romance takes a while to form and deepen. You need the time and detail to get to know and care about your characters. So while Bridges is certainly slow and schmaltzy, you endure, since it is also simple, sentimental and ultimately very satisfying.

There are 22 songs, but no show stopper. In fact just about every song is pensive and reflective, great for carrying the story forward, but perhaps not diverse enough to keep antsy audiences involved. And why must the few comedy scenes always involve the children, don’t the adults have a sense of humor, too? It seems to me that most guys and gals say a sense of humor is the first thing they look for in a partner, and both lead characters are pretty humorless.

This production of Bridges of Madison County is headed to Broadway and is at the point that so many of the out-of-town musicals I used to see in Boston from 1950-1990 ended up. Every principal player has a song, a key scene and a special moment, and most of the key plot points are covered. Good. But now it runs too long, and the creators will have to decide just what to cut. The great thing about the Williamstown experience is that the writers will be able to sit in the back of the ’62 Center theatre and watch exactly how each song goes over, when the audience gets restless, when it is rapt.

For those reasons the producers of this new musical made a wise decision to show this work to the sophisticated folks of the Berkshires – and not a few New Yorkers who are making the trip to see what is up. With a January opening on Broadway, there is plenty of time to refine and rejigger the elements to make what is already a good evening of theatre even better. Foremost among the tasks is to trim 15 minutes from each act.

Bridges of Madison County has good bones in its lovely score, penetrating book and amazing performers. The task ahead is to take something this good and to make it great.