Anything but funny: “on est déshabillé” (A Comedy About Death) at the Berkshire Fringe 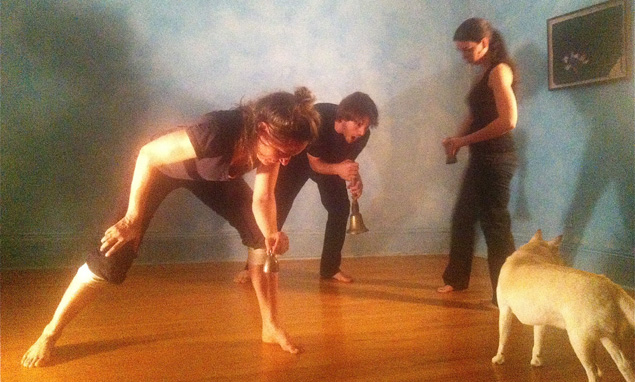 Anything but funny: “on est déshabillé” (A Comedy About Death) at the Berkshire Fringe

on est déshabillé (A Comedy About Death) from Eliza Ladd
Theatre Review by Gail M. Burns

This piece simply struck me dumb. I had the feeling that I should either start laughing very loudly and continue until it ended, or that I should stand up and walk out publicly and noisily, neither of which I can do as a professional critic. Nor is either something I have ever felt impelled to do in sixteen seasons as a critic. Performer/composer/storyteller Eliza Ladd, whose last Berkshire Fringe entry I enjoyed very much – Elephants and Gold in 2009 [read review here] – has hit so wide of the mark here that on est déshabillé embodies everything, and I do mean everything, that gives “fringe” theatre a bad name.

Its billing reads: “Born out of Rock-and-Roll and teetering toward Clown, on est déshabillé is an absurdist tour de force.” The names of Ionesco, Pinter, and Beckett did course through my mind as I watched, but those gentlemen were able to use nonsense to make sensible artistic comments on reality, which is indeed absurd in the extreme. on est déshabillé, a French phrase meaning “one is stripped bare” is indeed stripped bare of intellect and humor, leaving only a few memorable visuals and sound bites worthy of recall.

It started as a solo piece and then Ladd added a “Greek Chorus” of two women and a man. This padding to bring the show to an interminable sixty minutes sadly shows.

English is spoken throughout, but little of it makes any sense. There is a lot of dance and music and sound effects, some of which are interesting, but as there is no story, no discernable point or purpose to what is happening, who cares?

In 2009 I used this quotation in reference to Ladd’s work:

“The director-stage manager-playwright uses costumes, lighting, objects, sounds, movements, voices, instruments, language, screams, everything he needs to penetrate through the deafness and defenses of his audience. [S/he] must reach them.” – Mary Caroline Richards

In Elephants and Gold Ladd succeeded, here she fails miserably.

Which brought me to this quotation I unearthed while writing my Mother Courage… review yesterday:

“Human beings go to the theatre in order to be swept away, captivated, impressed, uplifted, horrified, moved, kept in suspense, released, diverted, set free, set going, transplanted from their own time, and supplied with illusions. It is not an art at all unless it does so.” – Bertolt Brecht

Supplement to the Review

Q&A with Eliza Ladd, creator of on est déshabillé
by Jacquelyn Gianetti

Born out of Rock-and-Roll and teetering toward Clown, on est déshabillé is an absurdist tour de force. Part warrior, part creature, part housewife – performer/composer/storyteller Eliza Ladd (Elephants and Gold, 2009) and company return to The Berkshire Fringe with a fragile and ferocious feast of the human spirit integrating movement, song, and live visual art.

In 2009 your piece, Elephants and Gold, was brought to The Berkshire Fringe. What about that experience inspired you to bring on est déshabillé (A Comedy About Death) to the festival?

First of all, I think it is a fantastic theatre to work in. It is so wonderful that we get to have a mini run of shows because so many situations and opportunities in NYC are very short lived. I really appreciate the kind of openness and curiosity of Berkshire audiences. I’ve found people are curious about new theatre and story telling and I’m working with a combination of music, theatre, and clown. It is also a treat for me to be able to bring my performers to the country and have a little non city experience. My work is really connected to human relationship to nature and the earth, so it is really nice to do something out of the city.

Each piece you bring to The Berkshire Fringe starts with you writing, creating, performing, and piecing together your own work. Do you associate your productions with your own exploration as an artist?

on est déshabillé (A Comedy About Death) is way past that now. This particular piece did start out as a solo – with me in an empty space with nothing. Although a lot came out during a whole bunch of clown exploration that I had done, with the risk and the experiment and the great expansion of this summer this piece is now going to be housed inside more music and an ensemble.

You’ve mentioned that many collaborators have been added into the piece this summer. How has adding musicians, Edward Gormley and Ian Smit, accentuated the piece? How has the aspect of rock and roll become a part of the piece?

The two musicians are really amazing. One is fantastic drummer and percussionist and the other is a guitarist. Ian worked in Elephants and Gold as well. It is unbelievable what something as simple as having a drummer brings to the piece. It is not rock and roll the whole time but it is really a spirit of very physical expressiveness and semi- wild exuberance of life that has been bursting out of me through my whole life in the theatre. I’ve always been doing music also, and now I’m trying to integrate them. There’s definitely some exuberant rock and roll, but there are a lot of other things too. There are some very sad, dark, and contemplative parts of the show as well, so it is not all loud. I was making myself laugh the other day. I call this a comedy, but there is so much darkness in this show, but it is a funny darkness.

Yes, I do. Both with the actual content of the production and with the process of involving all these other people, the ensemble and musicians. There is a certain continuous expansion or risk in a way and now we just really want to share with the audience. Fundamentally this is why I love to do theatre because of the sharing of these discoveries.

You’re a writer, musician, and a theatre artist. Do you find you approach the three kinds of compositions in a similar way?

It is interesting because my writing has really developed out of being on my feet in the studio. It is a very physically based process of writing. I would say there is a lot of cross over between the two in terms of how I’m working. I’m weaving these different strands and the process is sort of miraculous. Sometimes I feel like I’m working on a music thing and then what happens is I get this other text or something started and what I thought would be text turns into a song.

What are some relationships among the movement elements of the piece (a 7 foot stick, clowning, rock and roll)?

You know, it is interesting because this whole solo started because I had been working with the objects and all this stuff for a while, so I decided to just take everything away. And then at the end of that process the stick had crawled its way back in…and this one little piano. Then I realized what I had developed was wonderful but the creature in the play wanted to be part of a tribe, so now that is what is happening. The ensemble are all working with sticks now, too, but it is a different order of being than what I am doing in the solo. We’ve taken some of the movement that is in the solo and the ensemble is taking it on in different ways. All the elements that are in the solo are now being bled into the tribe. I’m really curious to see how it is going to work, you know? What the audience gets in the end from the mixing.

What inspired the “American” Greek chorus?

Because what I am expressing as a solo performer is very expansive and is beyond any one individual, I realized that I wanted to put it in to a species level experience, so that is why the chorus exists. It is an “American” Greek chorus because all my content on some level is related to American history, identity, and the freedom or oppression process that is happening here. It is not political, but at a deeper level it is asking a lot about how we are choosing to live and what it is that we are constructing here.

What made you decide to incorporate the specific elements of the human – the housewife, the creature, and the warrior?

They just seemed to be fundamental to my personality in a way, and to my creativity. They just came out of play. I realized that is just sort of who they were. They were these essences that I have been traveling around with my whole life and now they have manifested themselves all in this one being.

What do you think is the most important thing this piece has given you, and how do you think it will come through to The Berkshire Fringe audience?

It has really let me know that I am a story teller and an entertainer. It is giving me what I am supposed to be doing in the world. What I am supposed to offer back. It has given me something that is helping me do my function in this life which is actually a line in the play now. Accept your function. I hope that through what we are making we cultivate some level of permission and acceptance and joy of life even in the midst of all these horrible things that are happening. Some of the text and stories in the show come out of really challenging personal things, and also seeing social and cultural things that are challenging. My hope is that I am cultivating some sort of “here we are and we actually can live amongst all this stuff and still have joy”. I think that something like that, however imperfect, comes out of this show