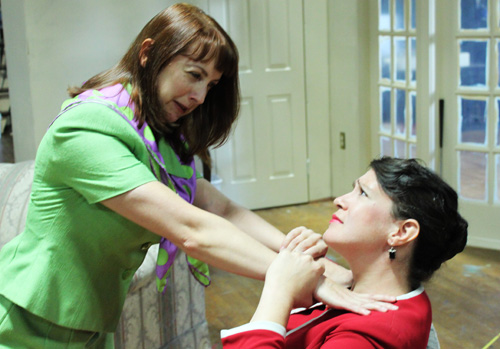 Farcical “The Fox on the Fairway” at Oldcastle Theatre Company
Theatre Review and Discussion by Gail M.Burns and Larry Murray

“O hear thou Gods of the game of sticks
And little dimpled balls,
For thou hast pitted Crouching Squirrel
Against Quail Valley
And the greens this day are tricky!”
– Ken Ludwig

Larry Murray: You introduced me to Oldcastle this past winter when they moved into their new theatre in downtown Bennington, Vermont. And it is a treasure in our own backyard. I was impressed with the high quality of their work then, and history seems to be repeating itself with their superb rendition of Ken Ludwig’s The Fox on the Fairway.

Gail M. Burns: What a fresh and funny farce! I loved how each act opened with the individual characters reciting quotations from famous folk on the subject of golf. Of course, golf is just the back-drop for this play which is really all about love and relationships. If, like me, you have never set foot on a golf course, you will not be missing anything.

Larry: This farce is supposedly second only to Ken Ludwig’s Lend Me a Tenor, but with Christine Decker at the director’s table, she fully captured the extravagant madness that this hilarious – and sometime downright silly – theatrical form demands. Farce for me is like a total vacation from worry and reality, and a flight into satire, buffoonery and physical humor of the most rarified kind. Ludwig dabbles in farce to my great enjoyment, but do you think it’s where he does his best writing?

Gail: Actually, Ludwig is a great fan of the light comedies of the 1930’s and 1940’s. He cites Noel Coward’s Private Lives and Blithe Spirit and the Kaufman and Hart classics You Can’t Take It With You and The Man Who Came To Dinner as “textbook examples of pure stagecraft at its best.” I encourage our readers to check out Ludwig’s foreword to the play, which he asks theatres to reprint in their programs but which Oldcastle has chosen to use only the last paragraph in the “Director’s Notes” on the program insert. [click here] There is also an interesting interview with Ludwig about his inspirations and aspirations for this play on his [Web site.}

Here the playwright’s challenge was to bring that humor to a 21st century American setting, and he found the perfect milleu in the dated hierarchical structure of country club life.

Larry: The plot was pretty straight forward, two rival golf clubs – Quail Valley Golf and Country Club. and Crouching Squirrel Golf and Racquet Club – meet at the annual inter-club championship, and the clubs’ executive directors place an outrageous bet on who will win. We meet the six characters in a flurry of one liners as the cast defines where the traditional five doors used for exits and entrances will be, three on stage, and two more through the audience itself. Once again the theatre was reconfigured for a sort of truncated thrust setup in which every seat was near all the action. It seems that once the quickie first flurry was dispatched, we actually got to meet the characters. But I get so confused over who married whom and when and how many times, so could you unravel the relationships for our readers, I’m sure to get something wrong. And why so many?

Gail: Ludwig uses his six characters to look at love and marriage from all sides. Young Justin Hicks (Nick Piacente) and Louise Heindbedder (Meredith Meurs) are madly in love and get engaged in the play’s opening scene. The rest of the characters are middle-aged and much more jaded about the whole process. Quail Valley club executive director Henry Bingham (Peter Langstaff) and his wife Muriel (Natalie Wilder) have a long, loveless, and fractuous marriage. Pamela Peabody (Sophia L. Garder) has been married and divorced three times, the first to Crouching Squirrel executive director Richard “Dickie” Bell (Patrick Ellison Shea). In the end all the characters find love, but it is the bumps along their rocky roads to romance that keep the farcical wheels spinning.

Larry: Nicely recapitulated. And no matter who was married to whom, everyone in the cast was not only energetic, but seemed to be running a comedy marathon as the four scenes progressed, getting ever more frantic and over the top. I simply adored Meurs’ Louise, she played it with a natural sweetness that perfectly matched the hyper-active characterization of Justin which Piacente sent over the proverbial moon. His physical comedy was stunning, and I suspect he has serious dance or gymnastics training which he was able to use to good advantage as the surprise golfer, employee, fiancé and over medicated patient. Though, come to think of it, he was hard pressed to top Wilder as Muriel.

Gail: It was a real treat for me to see Garder (Pamela) do comedy. She is a beautiful woman and somehow it is always more surprising when great beauties act silly. Her drunk scene with Landstaff (Bingham) was perfection.

Langstaff and Shea (as Dickie) were marvelous too. Just wearing those sweaters and pants with a straight face was a monumental achievement for Shea!

Larry: The technical aspects of all the Oldcastle Theatre productions have been virtually flawless, and The Fox On the Fairway sure had a lot of sound and light cues as the sextet ran around the stage telling the story. The set by Kenneth Mooney, who also designed the costumes, was totally functional and detailed, and didn’t you just love the rain effect?

Gail: I really believed that it was raining out on the Quail Valley fairway, which we glimpse through the French doors up center. David V. Groupé’s lighting was just right, capturing that sense of darkness that gathers during a summer storm. Also important were the many sound cues which were spot on and helped me envision every swing of the club in the tournament.

Mooney’s costumes were just glorious. Each of the three ladies – very different in age, shape, and coloring – looked spectacular. I loved that Muriel was allowed to be a beautiful woman too, instead of a dowdy harridan. But the piece de resistance were Dickie Bell’s garish golf ensembles. I WANT those hot pink paisley pants!

Larry: Oldcastle Theatre’s audiences have been growing too as the community rediscovers them, and that’s great news for folks in the Northern Berkshires and Southern Vermont, not to mention neighboring New York. In a summer that has been pretty much devoid of farce on stage, here’s a chance for folks and get a belly full of humor, delivered right in their own back yard.