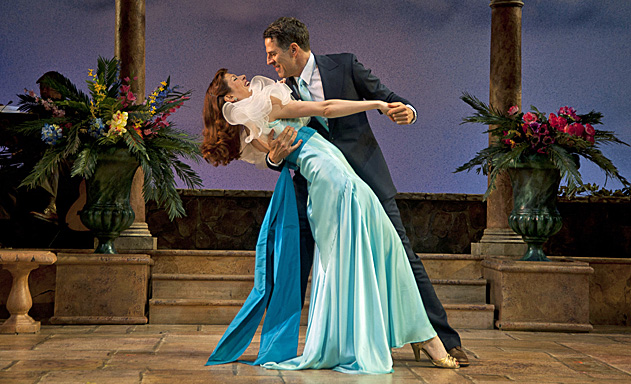 Thoroughly Entertaining “Much Ado About Nothing” at Barrington Stage Company
Theatre Review and Discussion by Gail M. Burns and Roseann Cane

Roseann Cane: Is there anything Julianne Boyd can’t do? Here in the already Shakespeare-rich Berkshires, the artistic director of the formidable Barrington Stage Company deemed it the right time to direct the company’s first attempt at a Shakespearean play, “Much Ado About Nothing.” She served it in Messina, Sicily, in the mid-1930s, dressed it as a screwball comedy of that era, spiced it with an original score by Andrew Gerle, and hot damn! It’s delicious.

Gail M. Burns: I saw the A.J. Antoon production of “Much Ado…” on Broadway as a teenager and promptly announced that this was my favorite Shakespearean comedy. In the intervening decades I have seen productions that made me question that selection, but Boyd’s interpretation gave me back the play I fell in love with. This “Much Ado..” is funny and timely and touchingly human.

Roseann: Even before we set eyes on the actors, Gerle’s lush music, initially played by a duet, then performed almost throughout by a quartet of fine musicians on mandolin, violin, guitar, clarinet, and accordion, ushers us into Michael Anania’s sundrenched set of golds and oranges, yellows and blues. Sara Jean Tosetti’s vibrant Sicilian costumes are every bit as stunning.

Gail: The mark of good stage costumes is not only how they look but how they move. Tosetti’s set time, place, and rank while allowing the actors to engage in Boyd’s vigorous physical comedy, Cassie Abate’s exquisite choreography, and Ryan Winkles’ fight scenes.

Gail: One of the reasons Boyd chose “Much Ado…” – a selection about which much ado has been made! – is because she felt she had the perfect cast in her stable of regulars. Innvar, Egolf, Mark H. Dold (Don John), Gordon Stanley (Antonio), and Emily Taplin Boyd (Margaret) have all appeared many times at BSC, but the newcomers are equally perfect in their roles. I was deeply moved by Philip Kerr’s Leonato, and David Bishins’ Don Pedro. Experienced Shakespearean actors John Pasha and Kim Wong shine in the minor roles of Borachio and Ursula. And Ben Cole makes an auspicious BSC debut as one of Dogberry’s hilariously inept team of watchmen.

Roseann: As the younger, more somber set of lovers, Babak Tafti as Claudio and Christina Pumariega as Hero are equally arresting. Pumariega is sweet and lovely. Tafti’s performance, full of feeling and richly shaded, is a knockout.

Gail: Their story is much, much darker than that of Beatrice and Benedick, and goes right to the heart of the timely topic of “slut shaming.” Yes, Hero is falsely accused, but the agonizing impact on her and her whole family is profound and is only slightly less so in today’s world. The sexual double standard for men and women was and is unfair and destructive.

Pumariega does an excellent job of playing Hero as sweet and young, but also as a strong, funny woman in her own right. And Egolf, Stanley and Kerr give her strong support as her family members. Hero’s shaming creates a very real challenge for Beatrice and Benedick’s relationship, and moves the story along with real dramatic suspense.

Roseann: Another memorable performance: John Cariani, as the malaprop-prone constable Dogberry, is hilariously shrill and self important. The wiry actor is almost shockingly flexible, physically as well as verbally, and executed some fabulous pratfalls. (Cariani is also a playwright, probably best known for “Almost, Maine.”)

Gail: The British are much better than we Americans at allowing artists to excel in more than one realm. We pigeon-hole people too quickly. Cariani is a fabulous Dogberry. As he writes in his program bio: “Doing plays in the Berkshires is about as good as it gets!” Let’s hope he continues to have opportunities to act and write in this region – and soon!

Roseann: I did have some difficulty hearing the actors over the music, but that happened briefly in only one or two scenes. Still, if this sound glitch is corrected, I am very happy to declare this production of “Much Ado” as close to flawless as a night at the theater can be. And no, that isn’t hyperbole. All too often theatergoers turn up their noses at Shakespeare, declaring his work “boring,” perhaps because they were never properly taught to appreciate it. Here I am reminded of the Rodney Dangerfield movie from the ‘80s, “Back to School.” (Really.) Playing a coarse self-made billionaire, Dangerfield accompanies his newly-enrolled son to the college bookstore. Looking around at all the shelves of books and the milling crowd of students looking through them, Dangerfield’s face lights up, and in a burst of happy generosity, he pulls out his wallet and shouts, “Shakespeare for everybody!”

Gail: Absolutely! This is about as accessible as Shakespeare gets, and thanks to Shakespeare & Company’s decades of excellent education efforts in Berkshire County schools local residents are knowledgeable and primed to thoroughly enjoy this production. Success builds on success, and as Jeremy D., Goodwin’s Boston Globe article, published on the day of the official opening of this show, proves, Boyd and Barrington Stage and Tina Packer and Shakespeare & Company have seriously upped the ante and changed the game for theatre throughout this region. Brava!