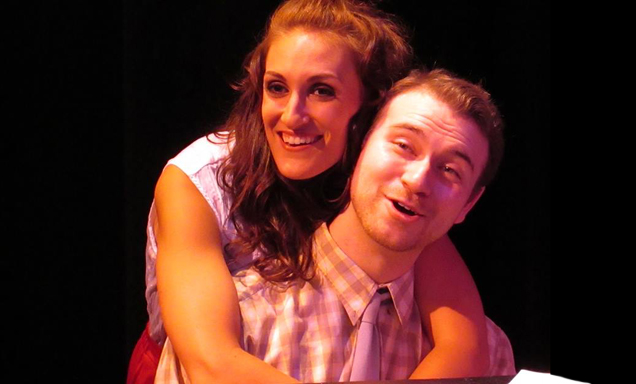 Somehow this little musical, which premiered in 1978, has evaded me all these years, so I was excited to see it turn up on the 2013 Theater Barn schedule. It seemed a natural fit for the Barn, where their August musicals are usually the highlight of their season. I would prefer to think that this production is a sad exception to that rule, rather than a harbinger of an overall slide in quality in their musical productions

But the first problem lies with the show itself. They’re Playing Our Song is basically a two person chamber musical with a book by Neil Simon, music by Marvin Hamlisch, and lyrics by Carole Bayer Sager, the show centers on the romance between award-winning songwriter Vernon Gersh and up-and-coming lyricist Sonia Walsk, thinly disguised versions of Hamlisch and Sager, who were concluding a long relationship around the time the show opened. There are also two choruses – three men and three women – who are supposed to be the main characters’ subconscious voices or some such thing, which is hogwash because they are nothing but vocal harmony and eye-candy.

The 1970’s are long gone and Hamlisch is dead. This does not bode well for a topical show filled with in-jokes. Simon has done his friends no favors by providing a book that is nothing but punch lines. Character is always sacrificed to laughs here, presumably on the assumption that the audience already knew all about Hamlisch and Sager and would be appropriately star-struck by this peek behind the scenes at their oh-so-wacky creative and romantic processes.

In a musical, songs fill in where the book leaves off, but Hamlisch and Sager have failed to give their alter-egos establishing numbers early on. He’s a big deal and she’s a kook. The early feminist version of the strong woman as delightful kook has worn very, very thin, but Sonia fares better than Vernon here. She at least is shown to have some depth and compassion. Vernon just rages and blusters until the rather sudden happily-ever-after conclusion.

Ryan Halsaver is overly energetic as Vernon, slamming each and every joke home like a football player spiking a touchdown. Caitlin Lester-Sams (Sonia) , on the other hand, is barely audible, when speaking or singing. I cannot explain this because every now and then she opens up and a considerable amount of sound comes out, so she is capable of projecting, but she isn’t doing it. The off-stage musicians, headed by Musical Director Victoria Casella consistently overpowers her.

I was very surprised to see what a big show this is technically. Every scene is set somewhere new – Vernon’s living room, Vernon’s bedroom, Vernon’s studio, Sonia’s apartment, a restaurant/discoteque, a house in Quogue, a car, a room at Cedar Sinai Hospital, and back again and on and on. The Theater Barn is a small venue, and set deisgner Abe Phelps, stage manager Megan K. Smith, and the crew have done an excellent job of getting large objects like grand pianos, bed, and sofas, rolling on and off stage smoothly. But the trade off is that they are shabby looking, and the back drop of the NYC skyline is too short, making the total visual effect amateurish.

Logane Robinson’s costumes look similarly unprofessional. One of Sonia’s “delightful quirks” is that she wears cast-off costumes from plays in which her friends have appeared in order to save money on clothing. While a few of her ensembles are believable as stage-wear, most are not, and some are just ill fiting. And just why does a woman who has already penned at least one hit song need to beg for clothing? There are inexpensive ways to clothe yourself without raiding the theatres.

The casting of the chorus members is odd. They are very different in form and feature from one another and from Vernon and Sonia, so it is hard to accept that they are aspects of those characters; and when they are all costumed identically at least one performer is wedged into an ensemble that is frankly unflattering to his or her body.

There are lots of laughs, and director Michael Perreca has choreographed some nifty 1970’s dance numbers, which the chorus performs ably to cover scene changes. But otherwise this production is not the cheerful bit of fun it ought to be. I am keeping my fingers crossed that their final musical – the regional premiere of Mel Brooks’ Young Frankenstein – puts the Barn back on track for the conclusion of their 30th anniversary season.