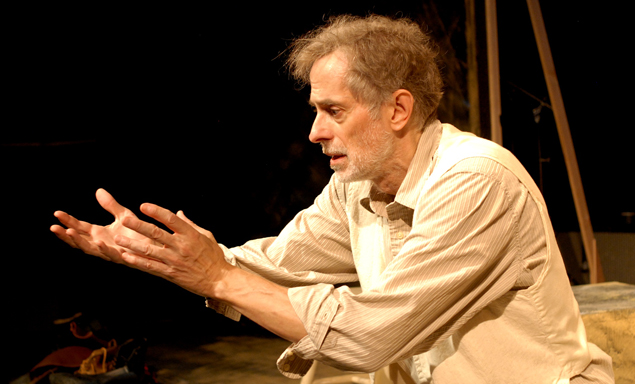 The first word of An Iliad is “rage.” You won’t recognize it unless you know Greek, but its there.

That is what The Poet (Steve Hendrickson) sings as he enters the theatre from the back of the house at the start of Lisa Peterson and Denis O’Hare’s Obie Award-winning dramatic adaptation of Robert Fagles’ translation of Homer’s Iliad.

At the show’s official world premiere at Seattle Rep in 2010, Peterson told the Seattle Times: “I think the “Iliad” is about rage as a drug. It is an examination of the warrior’s heart, spirit and mind, and about what rage can do to us.”

“Every time I sing this song, I hope its the last time.” – An Iliad

But there has never been a time in history when there hasn’t been a war to sing about, or the need for a poet to sing it.

And this is what makes An Iliad such a vital and gripping piece of theatre. In just under two hours, a single actor on an unfinished set brings to life the battle, not between the Greeks and the Trojans, but between rage and compassion in the human soul.

The war that formed the historical basis for the story of the Trojan War took place around 1250-80 BCE. Homer, whoever he or she was, probably penned his/her epic poem around 760 BCE, undoubtledy basing it on 400 years of oral tradition which Peterson and O’Hare celebrate here. Before there were written accounts, histories and stories, which were one and the same, were passed along orally by storytellers like the one played here by Hendrickson sho traveled from place to place and sang/spoke/acted in public places for whoever would listen.

“It’s like, here’s this guy Homer, who’s been alive for 2,000 years, telling the story to different cultures. So how does he approach a modern audience? He wonders, ‘How do I get you guys to understand this?'” O’Hare, a celebrated actor who has played the Poet in An Iliad on occasion, told The Seattle Times.

In this production at Chester it only took about ten minutes for Hendrickson and director Sheila Siragusa to get, and hold, my attention, whereas an all-star recording of The Iliad bored me to tears a few years back. The editing helps – 105 minutes is preferable to 6 hours – and so does Fagles’ visceral contemporary 1990 translation. Fagles is one of very few translators to have taken on all three of the great classical epics — The Iliad, The Odyssey, and The Aeneid — and all three have sold millions of copies, both in print and in audio versions.

The script gives no indication of what the set should look like, and so each production team tackling this play gets to create their own unique environment. At Chester Siragusa and her design team – Vicki R. Davis, Sets and Costumes; and Lara Dubin, lights – have created an unfinished stage set for…a show, any show. Hendrickson’s arrival drives the set builder and the sound man (Tom Shread, more about him in a minute) from the stage in confusion.

Hendrickson carries a suitcase which contains an impressive array of tiny liquor bottles and many papers, but ultimately he creates all the “props” and settings through his words and body language. There are a couple of blocks and a ladder for him to climb and sit on, a chair and a table, and, thankfully, an ample supply of water on stage. (Holding the stage alone for nearly two hours is thirsty work!)

Homer’s work covers only the final weeks of the decade-long Trojan War, and An Iliad focuses only on the stories of Achilles, his cousin and dear friend Patroklos, his rival Hector, and Hector’s father Priam, wife Andromache, and their infant son Astyanax. Only Andromache survives the war.

Hendrickson and Siragusa worked closely in rehearsal with Shread, the CTC Resident Sound Designer, who has composed an accompaniment he performs live. According to CTC Artistic Director Byam Stevens, “Every production of An Iliad to date has featured a live accompaniment, often an acoustic bass or cello. This is very much in keeping with the ancient, bardic tradition in which traveling poets accompanied themselves on a lyre or lute.” Here Shread plays a range of acoustic and electric instruments to create a mysterious and ancient soundscape with sounds aren’t readily identifiable as this instrument or that. He and his collection of sound producing gadgets are behind a semi-tranparent scrim that occupies most of stage right, and from where I was seated house left I could catch tantalizing glimpses of how he worked.

Peterson was deeply frustrated by the seemingly endless war in Iraq back in 2005 when she first approacked O’Hare with the concept of creating An Iliad. Eight years later that war is still going on, and several new ones have erupted, and everyone’s patience is even more sorely tried.

The day I sat down to write this review the Muslim Brotherhood movement in Egypt had called for a “Day of Rage” in the wake of a military crackdown that killed more than 600 people. The death toll is mounting…

Not only is An Iliad an invigorating and timely piece of theatre, it is an excellent and exciting introduction to this classic for junior high and high school aged students who have or will be studying The Iliad this coming academic year.