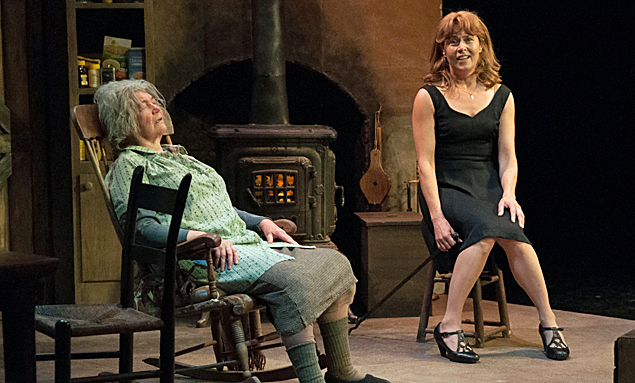 The Beauty Queen of Leenane
Theatre Review and Discussion by Gail M. Burns and Larry Murray

Gail M. Burns: The Beauty Queen of Leenane (pronounced leh-NAN) rocketed playwright Martin McDonagh to fame at age 25 when it opened in the West End in 1996.

Two years later he became the first playwright since William Shakespeare to have four of his plays produced professionally in his native London in a single season. While he has become known as a great Irish playwright, his knowledge of life in the rural parts of western Ireland about which he writes is based on recollections from summer vacations and the tales told by his Galway-born father. McDonagh is as English as they come.

Larry Murray: Well you could have fooled me. All that Irish talk on stage was like watching actors speaking some sort of foreign patois. That word “Brogue” or accent comes from the Irish word, “barróg,” which means “accent” or “speech impediment,” you know. But I would call Martin McDonagh an Anglo-Irish playwright since while he was brought up in the Irish section of London by Irish parents, he did return to the ould sod frequently during his life. More importantly it is clear that he developed a love for the Irish form of story telling, and in The Beauty Queen of Leenane – which he says he wrote in a week and a half – he surely has a fascinating tale to tell, don’t you think?

Gail: Set in 1989 in the small village of Leenane in Connemara, County Galway, Ireland, the play centers on the life of Maureen Folan, a 40-year-old virgin who is the sole caregiver to her 70 year-old mother, Mag. Two sisters have escaped into marriage and family life, but Maureen, with a history of mental illness, is trapped in a small, bleak cottage and in an overly dependent, seriously disfunctional relationship with her mother.

Larry: The characters of Meg and Maureen are amazing. I think the way Tina Packer turned herself into a blobby burlap sack of spuds as Meg was incredible. That one of the great Shakespearean authorities of our age could so completely remake herself for a part that was so completely opposite her usual bubbly personality in real life is remarkable. We read and heard that she had a difficult time coming to grips with someone with so little history, so few redeeming personal qualities. And yet Mag is like so many people we meet in life, shallow, selfish, and a bit slow.

Gail: Wearing a scruffy grey wig and no make-up, Packer is almost unrecognizable, except for that “Tina Twinkle” in her eyes. Beauty can be disguised, but intelligence is hard to fake or conceal. It was her intellectual, not her physical vanity that made this role difficult for Packer, but she has done an excellent job and is a treat to watch – as much as anything in this painful play can be considered a “treat.”

Larry: On the other hand we have the vibrant Elizabeth Aspenlieder playing the frustrated but dutiful daughter who is abused daily by her mother’s demands and copes by meting out little punishments. In the script she is supposed to be 40 or so, but she came across as much younger, I think.

Gail: All McDonagh tells us about Maureen is that she is tall and plain. Aspenlieder is neither, but, as we saw with Packer, the theatre is all about transformation. I was sorely disappointed that Aspenlieder was unable to make the same commitment to becoming Maureen that Packer made to becoming Mag.

Larry: Aspenlieder’s Maureen worked ok on stage, she found perhaps a different way of interpreting the role than others who have done it. You don’t have to be a particular age to want love, or resent being taken for granted. Her world certainly expands when she meets up with Pato Dooley, doesn’t it.

Gail: Pato is one of my favorite male characters in modern drama, and I loved David Sedgwick in the role. If that Dolores Hooley (or is it Healey) ever gets tired of him I’ll take him off her hands! I also loved Edmund Donovan as Pato’s much younger brother, Ray. He was the embodiment of the teen slacker – constantly restless in a life of aimless rest.

Larry: For me the best scene was when Maureen flaunted her intimacy with Pato in front of her mother, and Meg’s vicious reaction to it. Those moments set what up to then had been an interesting play into one that became totally fascinating, like a car wreck. Simmering beneath the surface of the already dysfunctional Meg and Maureen were demons that were uncontrollable once set loose. The play morphed from a tale of a troubled relationship to one of horror. It then takes us places we never expected to go.

Gail: This play is horrific, and it is certainly not for children. Even though I have seen it twice before I found myself cringing and averting my eyes durng the more violent scenes. Director Matthew Penn takes Packer and Aspenlieder to places of unspeakable anger and cruelty.

Larry: A lot of the production detailing was impressive, I actually like the way the peat burner was constantly in use and would brighten to suggest it flaring up when fuel was added to the fire.

On the other hand Alexander Sovronsky’s rain effect in the second half was both a bit too loud and faded out to aburptly so that it called attention to itself rather than simply setting the mood. Patrick Brennan’s set conveyed the claustrophobic surroundings of a very small cottage, while the routine making of porridge and tea or broth suggested the monotony of it all, didn’t it.

Gail: From where I was sitting I watched the little mountain of dead, soggy tea bags beside the sink growing as the play progressed. Packer has recently been to her native Britain, and returned with all the authentic packaging for the foods Mag and Maureen consume: Kimberley biscuits, porridge, and Complan among them. For those who are wondering, Complan is an instant hot beverage sold in Britain as a dietary supplement for the elderly, much like Boost and Ensure are here in the states.

Larry: Finally seeing this play confirmed that I would like to see more of this playwright, and since this is part of a trilogy, that leaves open some interesting possibilities for the company. Now the question is whether there is any way to become acclimated to the Irish brogue before you get to the theatre.

Gail: It will be interesting to see if either of the other Leenane plays – A Skull in Connemara and/or The Lonesome West – turn up in future Shakespeare & Company seasons, or whether they tackle his more acclaimed play The Pillowman. All of McDonagh’s works are equally dark and grisly, so part of that decision may rest on how Berkshire audiences reacte to this one, The Beauty Queen of Leenane.