A stunning Stockholm gets its American premiere at Stageworks/Hudson 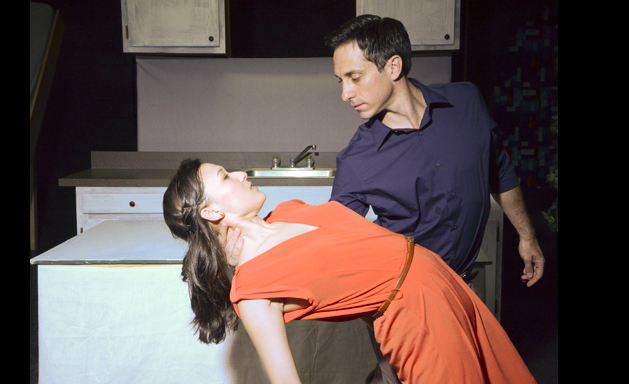 A stunning Stockholm gets its American premiere at Stageworks/Hudson

In Hinduism Kali is the Dark Mother, goddess of destruction, death, and time. One of religion’s fiercest deities, she is frequently portrayed standing with one foot on top of her husband Shiva, who has thrown himself at her feet to stop a killing rampage.

“Stockholm,” in its American premiere at Stageworks/Hudson, explores one day in the life of Todd (Jason Babinsky) and Kali (Emily Gardiner Hall), a couple who appear to be blessed with deep love, earth-scorching passion, and material success. As they prepare to celebrate Todd’s birthday and an upcoming trip to Sweden, they reveal the complexity of their relationship and the frightening grip of their connection. They are hostages to a cycle of eros and annihilation, at turns captors and victims, each craving escape and envelopment. More succinctly, Todd and Kali have Stockholm Syndrome.

Lavery’s stunning script is fittingly (and ironically) non-linear, weaving spoken word, choreography, sound, and visual effects in a way that transmits Todd and Kali’s imprisonment like a punch in the gut and wends its way into the observer’s psyche.

Laura Margolis has brought together a very gifted team to execute “Stockholm,” which in less expert hands could have been labyrinthine and confusing. Along with Margolis’s own brilliant direction, Jennifer Weber’s remarkable choreography is gloriously precise yet wild and unrelentingly carnal. Randall Parsons’s set is ingenious, mirroring Todd and Kali’s roiling coupling, initially clean and serene, later revealing (sometimes with a shock) secret paths and hidden rooms.

Deena Pewtherer’s lighting design is revelatory, in every sense. And Ben Heyman’s sound design is precise, original, and profoundly enhances the production. (In the interest of full disclosure, I must state that I’ve known Ben for quite some time, and I have worked with him in my “other” life as an actor and director.)

I can’t imagine that Margolis could have made better casting choices. Babinsky embodies the the poignantly frustrated and furious Todd, and his verbal and physical reactions to his overbearing mother’s telephone calls provide a neat and surprising contrast to his behavior toward his pathologically jealous wife. That Hall’s violent Kali is as sympathetic and vulnerable is a testament to Hall’s skill and talent. Both actors are consummate (pun intended) dancers, acrobatic and sinewy and graceful, making seamless transitions between the verbal and the physical.

I also can’t imagine that there will be many opportunities to witness such a finely-tuned production of this unique play, so I would urge you to to visit Stageworks before “Stockholm” closes on September 1.