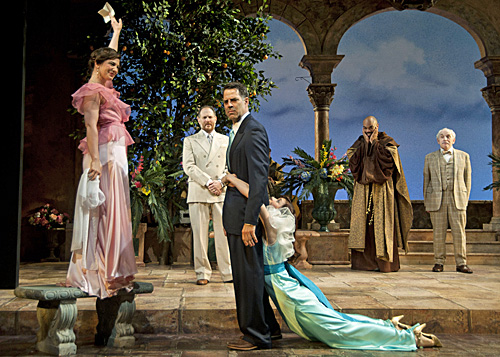 Funny Inventive Much Ado About Nothing at Barrington Stage
Reprinted from Broadway World
by Larry Murray, editor of Berkshire on Stage

There were more than a few noses out of joint when Julianne Boyd, artistic director of Barrington Stage Company (BSC) announced she was about to try her hand at Shakespeare. She chose the primarily prose MUCH ADO ABOUT NOTHING, banking on the combination of a great cast with some original comedy and musical touches – where she has impeccable credentials – to bring new life to this old chestnut. The marvelous production which opened last night is not only BSC’s first Shakespeare, but a decided gamble, too, since the Berkshires have long had some pretty impressive experts on Shakespeare living in the area, including one company which has staged just about every one of his plays over the years. Boyd also scheduled Much Ado for the August slot normally reserved for more populist comedies.

WIth the world renowned Shakespeare & Company just down the road, and both the Williamstown and Berkshire Theatre Festivals having mounted rich and textured Shakespeare in the past decade, Boyd is, in a sense, betting her reputation on it. After all, do the rural Berkshires need another company performing Shakespeare where there is no real need?

The answer came last night when MUCH ADO ABOUT NOTHING opened, and it is a resounding “yes!” Boyd is fielding a uniquely fresh and breezy Shakespeare that couldn’t be more perfect for summer theatre-goers.

Boyd and Barrington Stage have done more than equal their predecessors, they have actually raised the bar a bit by making this Much Ado about as accessible as Shakespeare ever gets. BSC’s company of actors brings a fresh new perspective to the bard, including a more “American” sound to the language which all too often is entombed in the rich, dulcet tones of aging actors or the syncopated rhythms of the young. Much Ado, being about 70% prose, the balance verse, makes such a transformation possible.

The Barrington cast was visually perfect, too, more so than then the average. The two quarreling couples, Hero and Claudio (Christina Pumariega and Babak Tafti) and Beatrice and Benedick (Gretchen Egolf and Christopher Innvar seen in photo above) are fantastic creations by Shakespeare, made hilarious in this production.

Set in Sicily in the 1930’s, every role in this classic tale has been freshly thought out, played with clockwork precision by a nimble cast that had to keep track of the funny business on stage as well as the gushing torrent of often equally funny words from the script.

Boyd’s loyal Company of actors and audiences explore a surprisingly different side of their normal acting range together. Watching this MUCH ADO ABOUT NOTHING collaboration is a joy. Invited to a rehearsal I saw how Boyd empowers her actors to work on their own comedy schtick. For Much Ado Boyd has employed the split second timing of a farce with the lush romantic setting of SIcily in the 1930’s, the sunny years just before Il Duce and Der Führer accosted the world with their Axis of Evil.

As Beatrice and Benedict quarrel over whether they even liked each other, much less loved one another, Gretchen Egolf and Christopher Innvar made Shakespeare’s words suddenly become far more contemporary than ever heard before. Few writers have matched the witty and withering words of Shakespeare in MUCH ADO ABOUT NOTHING. It took Edward Albee in Who’s Afraid of Virginia Woolf to top him.

Watching the physical comedy inserted by the cast under Boyd, I was struck how this Much Ado is a bit like mashing Shakespeare and Molière together with a little Feydeau thrown in. At first the audience wasn’t quite sure what to make of it. That may be due to the fact that far too many people mistakenly approach a Shakespeare production as a sort of intellectual duty, and sit silently as if they were at a high mass of the arts.

Boyd says “forget all that” from the get-go as she breaks the mold with even more bold physical humor than usual, in perfect harmony with an original score by Andrew Gerle that is far from the period’s delicate lute-lite music. With just a few full-out musical numbers – choreographed by Cassie Abate – the on-stage band and cast of actors turns the play into a musical for a few moments with delightful accordion, clarinet, violin and guitar/mandolin accompaniment. The musical bridges between scenes are a delight as is the music playing as you enter the theatre. These touches let you know that this is not going to be your English teacher’s Shakespeare. The ultimate treat comes late in the performance as the audience gets to see a tango for the ages. It is worth the price of admission all by itself.

The complex plot about rivals playing tricks on lovers to break them up has not changed in hundreds of years, but what has been added by Boyd is the endless variery of visual laughs in the proceedings, some bringing to mind the Tracy-Hepburn movies of the past. At one point, the imposingly tall Gretchen Egolf is even dressed in gorgeous blue silk slacks reminiscent of Hepburn. She moves just like the legend. You could be forgiven if you think you are actually watching the classic comedienne at work.

Christopher Innvar has his own set of character tom-foolery, especially as he is made to overhear lies intended to deceive him as he hides first under a table, then with a potted plant on his head. He tries to write a love song with a pencil that refuses to stay put when laid aside, finally tossing it into the wings much to the audiences’ delight.

The fourth wall between the actors and the audience is broken as both Innvar and Egolf rescue items from the first row that have fallen or been hidden there.

Every role, every bit of business in MUCH ADO ABOUT NOTHING is important, including the wonderful turns given to the characters of Antonio and Leonato by Gordon Stanley and Philip Kerr.

Mark H. Dold played the delightfully evil role of Don John, perhaps because he was Don Pedro’s bastard brother in the play, and made his entrance plucking a flower from an effusive vase of the things, ripped it in half and tossed it back. In all of theatre, there has rarely been an action that so effectively conveyed a character’s nastiness.

Winning the audience vote at the curtain call is John Cariani in the ever-popular role of Dogberry, the Constable. It is doubtful if Shakespeare ever wrote a funnier part, nor any actor ever topped the insane performance delivered by Cariani. Dogberry’s partner Verges (David Ryan Smith) had a tough job topping him, but in the seating sequences with Gordon Stanley, the split second timing is spectacular.

Designed by Michael Anania, the gorgeous triple arched set for this production is arrayed with a profusion of vases and trees that visually convey the sunny Messina of the first half, while in the second act a dark scrim turns the mood bleak for the segments that take place at night and in the crypt of the supposedly deceased Hero.

Over it all a sculpted theatre mask tops the middle arch, overlooking the proceedings on stage with its eyes and mouth open as was characteristic of those worn by actors in the old Greek and Roman theatres. I would venture to guess it is meant to represent a hetaira (concubine) to symbolize the impossible position women in Shakespeare’s day were often relegated, unable to decide their own fates. In MUCH ADO ABOUT NOTHING it is the men who contrive to get their own way through deceit, lies and treachery, and therein lies its biggest lesson: that the effort to control women’s lives is not a new phenomenon, but one that been played since earliest times. That Shakespeare in Much Ado allows things to be corrected, and the truth to prevail tells us a great deal.

In the end MUCH ADO ABOUT NOTHING is a screwball comedy wrapped in two love stories, dueling men, and timeless lessons about human nature.

“Sigh no more ladies, sigh no more, men were deceivers ever”
– William Shakespeare, Much Ado About Nothing