“Young Frankenstein” the Mel Brooks musical at The Theater Barn 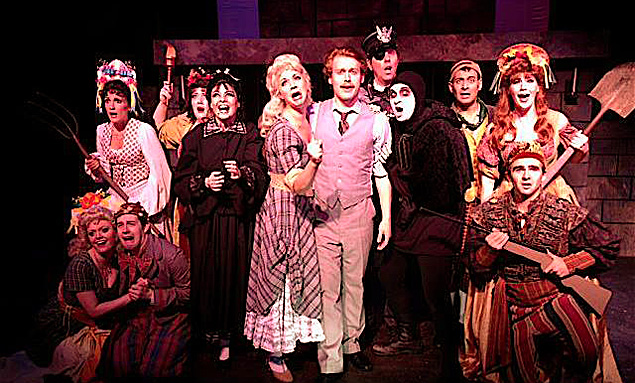 “Young Frankenstein” the Mel Brooks musical at The Theater Barn

Above: The cast poses for rehearsal photos of Young Frankenstein.

Okay gang, buy tickets to see Young Frankenstein at The Theater Barn, fire up the Way Back Machine, set your sense of humor to “Junior High,” and you’ll have a ball. Set it any higher and you may be disappointed (high brow it ain’t!) but there are many worse ways to spend a summer evening than laughing your ass off at the stuff you used to find hilarious back in the day.

After Mel Brooks had a Broadway mega-hit in 2001 with his musical stage adaptation of his film The Producers, it was only natural that people would clamor for an encore. Blazing Saddles had too many horses and Silent Movie didn’t have them leaving the theatre humming, so Brooks and co-author Thomas Meehan (Brooks and Gene Wilder had written the screenplay) settled on Brooks’ iconic 1974 film Young Frankenstein. It opened on Broadway in 2007 and had a respectable 15 month run, but it was not the sensation that The Producers was.

Young Frankenstein is a VERY faithful adaptation of the film, so all your favorite jokes are there. “Put the candle back.” “Walk this way.” “My name is Frau Blücher (horse whinnies)” “Abby normal.” “Puttin’ on the Ritz.” etc. Of course the stage at The Theater Barn is tiny and the 15-person cast is large for this venue. But director Bert Bernardi makes excellent use of every inch of Abe Phelps’ two-story set and scene melts into scene effortlessly and convincingly.

That being said, the script is low-brow and sophomoric in the extreme, and many of the musical numbers – Brooks did both music and lyrics – have a brassy sameness (there are a lot of “jazz hands” in evidence) but the pacing is speedy and the cast is excellent. Two and a half hours of delicious silliness zips by in a flash.

The plot is familiar. Just when the good people of Transylvania think the last member of the Frankenstein family has kicked the bucket, Inspector Hans Kemp (Jimmy Johansmeyer) informs them that Frederick Frankenstein (Daniel Dunlow), a brilliant young New York surgeon engaged to the madcap socialite Elizabeth Benning (Kimberly Suskind), is the heir to his grandfather Victor’s castle. Frederick, who insists on having his last name pronounced Fronk-en-steen, wants none of it, but he gets all of it, including a wisecraking hunchback valet Igor (Ryan Halsaver), a beautiful young lab assistant named Inga (Katrina Gnatek), and a macbre housekeeper, Frau Blücher (Jerielle Morwitz). Soon he is back in his grandfather’s laboratory, animating a new Monster (Sean Riley) to wreck havoc on the community.

Bernardi has imported many of the performers from his own Connecticut-based theatre company, Pantochino Productions, and others are Theater Barn regulars who have worked together and with Bernardi before, so they are a comfortable fit. The three leading ladies – Gnatek, Suskind, and long-time Theater Barn favorite Morwitz – are not only very good, they are the spitting images of Teri Garr, Madeline Kahn, and Cloris Leachman in those film roles.

It is much, much harder to replicate the looks of Gene Wilder, Marty Feldman, and Peter Boyle, but Dunlow, Halsaver, and Riley bring their own energy to their roles. Halsver is particularly silly as Igor (pronounced Eye-gore), and the very young Dunlow centers the show nicely as Frederick.

Kenneth D’Elia is delightful in the minor role of the blind Hermit, and I was just tickled to see Johansmeyer, who always makes me laugh, back on the Theater Barn stage. (Yes, I know he was there last fall, but I missed him.) Johansmeyer has also designed the handsome and colorful costumes.

Michael McAssey leads the three-piece band off stage. The sound balance here is a nice one, with an ensemble of powerful singers blending easily with the musicians.

With no offense meant to Brooks, Bernardi, or anyone else associated with this fun production, Young Frankenstein really is silly dumb fun for the whole family. Before this summer slips away completely, pack up the family and go have a good laugh.