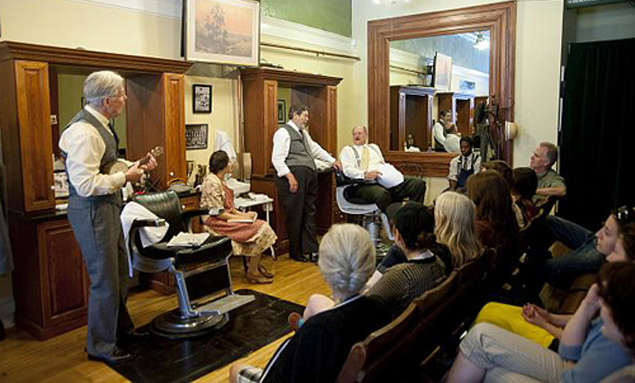 Above and below: Scenes from Kaufman’s Barber Shop. Photos by Kevin Sprague.

Gail M. Burns: I really enjoyed “going to the theatre” at Upstreet Barbers on North Street in Pittsfield. Mission Bar + Tapas next door was bustling on a beautiful Friday evening in August, and the audience was encouraged to go there at intermission for a beverage or to use the facilities. Meanwhile the shop’s other neighbor, Dottie’s Coffee Shop, served as the “green room” for the actors. There was a great community feel. Upstreet owners Michael Rinaldi and Shawn Gurek are to be thanked for their hospitality. I hope this helps put them on the map!

Larry Murray: Shakespeare & Company never runs out of surprises and using the Upstreet Barber Shop as the setting for this play is a stroke of genius, and the location really is unique. Now I can say I have seen plays everywhere, from subway cars to Roman amphitheaters to the wooded glen at The Mount.

The challenges of getting Robert Sugarman’s play from concept to reality had to be a lot more difficult than it looks when you arrive at the improvised theatre.

Gail: Sugarman, a resident of Shaftsbury, VT, who has had several plays produced at Oldcastle, did several rewrites on the play just in the process of mounting this production. He had to change the time of year from Christmas to the early summer so that the actors didn’t die of heat stroke in winter clothes, and he had to accommodate director Regge Life’s decision to add music. His first idea was to have someone play the piano, but their discovery that actor Malcolm Ingram played the ukelele averted the issue of moving such a cumbersome instrument on site. I really enjoyed the musical interludes and the cast’s expert harmonies.

Larry: Of course the play itself takes place in 1920’s Syracuse, New York where Sugarman grew up, and being 86 years old at this point, reflects his early memories of what happened – and what might have – in a traditional Jewish barber shop. I grew up on Long Island and know that in the 1940-50’s the transition from immigrant family to first generation children was well underway. The parents still spoke a bit of Yiddish, but my classmates were all well assimilated. Usually only a small Star of David hanging from a chain gave a clue as to someone’s religion, just as the ashes on my forehead on Ash Wednesday let everyone know mine. In Kaufman’s Barber Shop three characters are Jewish, the barber and his customers, while the shoeshine “boy” is black and the manicurist Irish.

Larry: And while Thomas Brazzle as Walter “Trumpet” Henderson, the shoeshine boy had a substantial number of scenes in which to develop his complex personality, Kate Abbruzzese had far fewer as Maggie Fitzgerald to fill out the details of her character. The playwright developed the relationship between Maggie and Trumpet into a romance bringing the issue of racial intermarriage into the story, and then a pregnancy. In a very moving scene she had to carry the burden on the discussion on abortion pretty much by herself, adding yet another hot button topic to the mix.

What everyone in Kaufman’s Barber Shop had in common is that they all were the victims of discrimination and bigotry, and the play looks at the struggle for career and purpose in each of the five against the constant pressures of prejudice. During the course of the story we get to see racism, miscegenation, petty politics and what I call “going along to get along” at work. It turns out that one of the customers is the Assistant District Attorney, Morris (né Moishe) Schwartz, well played by Jonathan Croy.

Gail: Regular Berkshire theatre-goers are predisposed to like Croy from his many delightful comedic performances, his stellar directing stints, and because he has mentored so many local youngsters at the Fall Festival of Shakespeare. So casting him as the villain of this piece was brilliant. He is downright scary in the first act! But sadly Sugarman takes the character way off course in the second half of the second act, and makes him meaner than is plausible.

Larry: Exactly. The first two thirds of the play stretch our imaginations as a good evening of theatre should, but then halfway through the second act it veers off the track as the coincidences and actions of Morris Schwartz go from surprising and fascinating into the realm of the impossible to believe. He blames losing his job on the Barber Shop and the people therein, and while ranting and raving about his one-time friends and acquaintances being responsible for his turn of luck, their reactions are too pallid to be believed.

Gail: We hear too much from Schwartz to the detriment of other charactres, notably those of Jake Kaufman (Robert Lohbauer) and Jesse Markowitz (Ingram). Since writing this play Sugarman has written both a prequel and a sequel, both with Kaufman’s name in the title, so presumably there is much more to this barber than meets the eye.

Larry: I quickly identified with Brazzle’s “Trumpet” character who is following in his father’s footsteps (sic) shining shoes at Kaufman’s, and as a trumpeter in a local band. The difference is that the lad is also writing, and being mentored by none other than Langston Hughes. It turns out that Jake is a long-time friend of anarchist Emma Goldman and has been writing to her in prison. It seems everyone knows someone famous, doesn’t it.

Gail: There is a lot of name dropping, presumably to help establish period. I admit that the little I know about the mid-1920’s comes from The Great Gatsby and other tales of “The Lost Generation” of artists and writers. I have no idea what daily life in America was like then, between the World Wars and before the Great Depression.

Larry: Regge Life directed, following a well-received staged reading he led two years ago. His actors recreated the natural ebb and flow of a barber shop with Lohbauer clipping hair almost nonstop, Abbruzzese fussing with nails and Brazzle wielding his shoeshine finish cloth with the traditional snap which signals it is time to pay. Of course sight lines in an improvised theatre like this means most of the action is visible most of the time from the waist up, even less in the moments when Brazzle is doing shoes.

Gail: It depends on where you sit. From my perch on the side of the playing area the enormous mirror at the other end of the shop doubled my view. In other words everyone was always facing me one way or another! But the seating is tight and it is not assigned seating so you need to get there early.

Larry: I found the pacing quite natural, never rushed, and evocative of the 20 years I went to the same Italian barber shop growing up. Of course the barbers assumed that since I was a boy I would want to talk sports. Like the nasty assistant DA Schwartz men of that time had to fit a rather strict mold, and any variations were considered “abnormal”. I don’t miss the oppressive Eisenhower years, nor the days of Senator Joe McCarthy and his communist witchhunts which were cut from the same cloth as Schwartz’s vendettas in Kaufman’s Barber Shop.

Gail: I didn’t hang out in barber shops growing up, but women have always gravitated towards communal gathering places to share news and gossip. I agree with you that Sugarman, Life, and the cast did a good job of recreating the way people are both intimate and aloof in such a setting, and the rhythm of their chat.

Larry: This play deserves a strong recommendation, even if the polemics are a bit overdone, since barber shops are one of the few places you can hear the sort of earthy, sometimes heartless rhetoric that is used to encourage conformity. It is painful to hear in the context of the 1920’s before the depression hit, and – sadly – we have not made much real progress. The banality of bigotry is still very much with us today, as are the issues of racism, religious prejudice and the mis-application of power.