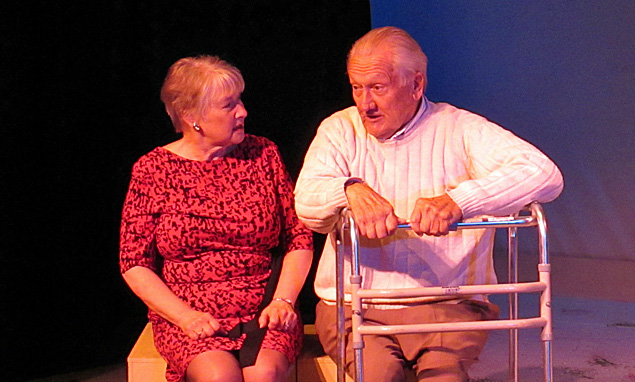 Larry Murray: In the world of theatre we don’t get to see many plays like Better Late. which is about older people and their relationships. So three cheers for the Theater Barn taking on this Larry Gelbart play. It’s a sort of a “dramedy” isn’t it.

Gail M. Burns: It is a remarkably solemn little play for the Theater Barn, which generally offers up light comedy, murder mystery, and bijou musicals.

Larry: What I was amazed at was the opening night audience in what is now the shoulder season for tourism, with the summer folks gone and the leaf peepers still weeks away. At the Theater Barn, it is strictly a local audience, and they turned out for the opening in respectable numbers, and while I saw some grey hair, I was surprised at the amount of blonde, brunette and every shade in between that dotted the audience in front of me. It seems that Gelbart’s story has a universal appeal. I suppose that is because we all have aging members in our family.

Gail: None of us are getting any younger, that’s for sure. But I think most of the audience thought they were attending a very different kind of play from what was presented. The Theater Barn has tackled profound subjects before – their top-notch production of Stones in His Pockets which filled this fall slot a few seasons back springs to mind – but they have been more satisfying dramatic journeys.

Larry: The setting, posh California, seemed to be at odds with the costume choices which looked pretty Goodwill to me. Older people – especially those with money – don’t always dress as dowdy as was depicted, cardigans and all.

Gail: Actually I thought Logane Robinson had done a great job of dressing Joan Coombs, sadly not the character of Nora but the actress Joan Coombs looked great. I thought everyone – actors, director Phil Rice, and Robinson – missed how chic and exciting these people were supposed to be. Coombs’ character must have had something special going on, but I never saw it. And yes, the men were all dressed very laid-back New England-y. Every time I visit California I am reminded how even straight men out there actually care about how they dress.

Larry: That love is still a factor in the lives of older people is a major point of Better Late, but how much better we seem to get along as the years pile up. In the Second Act, Julian Cowan punches Lee Baer in the nose but for the most part the relationships are tempered by maturity, even if the embers flame up now and then.

Gail: You and I were talking on the way home about how I still find great pleasure in acquiring things and how you, 17 years my senior, have passed that phase of life. These characters are your contemporaries, and they are beyond acquiring money and possessions. They just want love. And I don’t blame them.

All the men have to come to terms with the fact that Nora loves them, but not exclusively. Both husbands have to share her with her son, obviously, but the drama comes when they, and she, grapple with the idea of sharing her with each other. She loves them both, and if they are going to have her love, they have to learn to share.

Larry: With Julian pretty much earthbound with his walker, Phil Rice kept the action moving, though writer Gelbart was smart to set the story in ten scenes which took place in different configurations across the stage. They were also helped by the use of projections which showed the exteriors and interiors of the locations we were visiting. Gelbart was very specific that the stage was to be virtually bare with just the suggestion of the homes and highways involved.

Gail: Abe Phelps’ endless rearrangement of a half-dozen cubes and the changing slides gave me enough information about where each scene took place, but the show wasn’t about the places, it was about the people.

Rice has incorporated a recording of Pavane by Ned B. Fleischer, arranged and performed by Alan Magnin, into the action of the play. It represents the Elegy that the character of Lee is composing. Fleischer, who passed away two years ago, was a close friend and colleague of Rice’s, and I understand his desire to memorialize him here, but he has failed to associate the music with the character of Lee. Did the music speak to you at all, Larry?

Larry: I can only recall hearing fragments of it, it was either so perfect that I didn’t pay much attention to it – or too subtle and just beyond my hearing range.

My only problem was the never-ending descriptions of the relationships between Nora and her two men, the husband and the lover. Instead of seeing them doing things, we heard about them, and for me that is the dullest form of playwriting. My eyes glaze over when family and friends get the “remember when” blues and prattle on. I even nodded off twice during the first act and its endless exposition of who and why. Coombs delivered her lines in a steadily modulated voice, like so many of the people around us locally, so I can’t really fault her on-target delivery. But how I wished for some over-acting now and then to liven things up. Happily Hayes delivered all his lines with a real sparkle in his voice, and Noble as Julian was quite alive as well. And I am not sure if it was his whiny interpretation of Julian’s son Billy, but Sean Riley just grated on me.

Gail: I was really delighted by Noble’s performance. This is a different, more realistic role than he usually plays, or that playwright’s usually create for an older actor, and I enjoyed seeing him rise to the challenge. I felt he really understood who Julian was, and that enabled me to know, and care about him, too. I was less entranced by Hayes’ Lee. I need my film composers, my artists, with a little more panache. And I completely agree with you about Riley. He seemed to be performing in another play entirely – a much broader comedy – and it didn’t work.

Larry: For taking on subject matter we rarely see in the theatre, I give this production a “do see” recommendation. How about you?

Gail: I didn’t feel satisfied by this production. It was sad but without a redeeming moral to the story. Granted, that’s how life is, but that’s also why we don’t put real life up on stage. I didn’t feel that anyone had grown from their experiences, nor did I feel that I had learned something from witnessing their refusal or inability to do so. I left just feeling deflated.