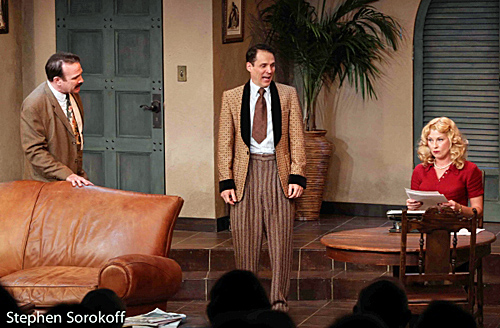 All montage photos by Kevin Sprague except for lower left, which is by Stephen Sorokoff.)

Scott and Hem in the Garden of Allah at Barrington Stage Company
Theatre Review by Gail M. Burns

“[F. Scott Fitzgerald] lived [at the Garden of Allah apartment complex] in those years just before dating the young pastry named Sheila Graham and trying to finish The Last Tycoon and struggling to make sense of studio employment and fighting an uphill battle to stay sober by drinking a lot of Coca-Cola.” – Walt Lockley

It is the Fourth of July, 1937, and Ernest Hemingway (Ted Koch) comes to pay a call on Scott Fitzgerald (Joey Collins) at his Garden of Allah bungalow. He is in Hollywood screening his Spanish Civil War documentary to the glitterati to raise money for ambulances. Fitzgerald is pretty much under house arrest and enforced sobriety, monitored by a personal assistant to Louis B. Mayer, one Miss Evelyn Montaigne (Angela Pierce), while he finishes a screen adaptation of Erich Remarque’s Three Comrades.

Fitzgerald’s wife, Zelda, is mentally ill and institutionalized in North Carolina. Their daughter, Scottie, is at boarding school in Connecticut. His relationship with Graham is about it begin. Hemingway’s second wife, Pauline, is at their ranch in Wyoming, and he has already begun a relationship with the woman who will become his third wife.

Neither man is happy.

Were Ernest Hemingway and F. Scott Fitzgerald ever happy? If they were they would not be as fascinating as they continue to be to us today, and Mark St. Germain would not have written this next in his series of “What if…?” plays. For me this one works much better than his 2009 opus Freud’s Last Session, which everyone on the planet loved except me. It is possible but not likely that Sigmund Freud and C.S. Lewis met, but they had no significant impact on each other’s lives and ideas, so while it is fun to imagine what a conversation between them might be like it is just that, an imaginary conversation, not a drama.

But Fitzgerald and Heminway knew each other very well, some would say way too well, and they had a huge impact on each other’s lives and work. So whether or not they ever spent the Fourth of July together at the Garden of Allah, there were plenty of times when their lives did intersect, for better or for worse.

St. Germain, who also directs, has assembled a “greatest hits” collection of quotations from Fitzgerald and Hemingway, and a few from their wives and famous cronies as well, and strung them together with the pretext that Hemingway wants to get Fitzgerald out of the cruel and slavish studio writing system and back to his novel writing, and Fitzgerald is convinced that that well has run dry for him. This allows the two to discuss their lives, loves, children, and, most of all, writing. Both men are tormented by their respective creative muses, alcohol addictions, and crises of personal and sexual identity.

During all of this Hemingway drinks prodigiously, and Fitzgerald, while he has bottles of booze stashed around the apartment, remains dry.

The third character, Miss Montaigne, St. Germain seems to have created out of whole cloth. She is the character we know the least about, but he manages to make her incredibly interesting and sympathetic in very few lines and stage appearances. The final tragic tableaux has her and Fitzgerald clutching glasses/bottles of booze. We know that in less than three years he’ll be dead, but what becomes of her?

I would love to see St. Germain turn this premise inside out and examine it from her perspective.
Koch and Collins can easily pass for Hemingway and Fitzgerald at that period of their lives, and Pierce plays Evelyn as a brittle bottle blonde with more pain behind her tough-as-nails exterior than first meets the eye.

Ryan Winkles has choreographed a ferocious fist fight between the two men which is thrilling in the intimate confines of the St. Germain Stage.

The Garden of Allah was built in 1919 on Sunset Boulevard between Crescent Heights and Havenhurst as the Hollywood mansion of actress Alla Nazimova. When her career started to falter she had a complex of 25 villas built around the main house, and its swimming pool shaped like the Black Sea, in 1927. It was torn down in June 1959 and replaced by a bank with a strip mall behind it, but in its heyday – and 1937 was certainly it – it was a popular stop-over for the likes of Fitzgerald, Robert Benchley, Dorothy Parker, Harpo Marx, and Sergei Rachmaninoff.

Set designer David M. Barber has designed an attractive and detailed set that I assume mimics the original, of which many photos exist, although I was sad that we had no view of that Black Sea-shaped swimming pool with Tallulah Bankhead skinny-dipping in it while Parker, Benchley and the gang booze and schmooze poolside awaiting the fireworks. Margaret A. McKowen has designed handsome period costumes, and Scott Pinkney has done a fine job with the lights, but Jessica Paz’ sound design was oddly loud during the fight scene.

I think it helps if you know a certain amount about Fitzgerald and Hemingway, their writing and the social and intellectual milleu of The Lost Generation, but if you venture in knowing very little and this play inspires you to learn more, that’s a good thing too. The show is running until mid-September and I hope that the coarse language (Hemingway swore like a sailor and Fitzgerald wasn’t far behind) doesn’t keep area high schools from bringing groups about to study these men’s work in at the start of the school year.